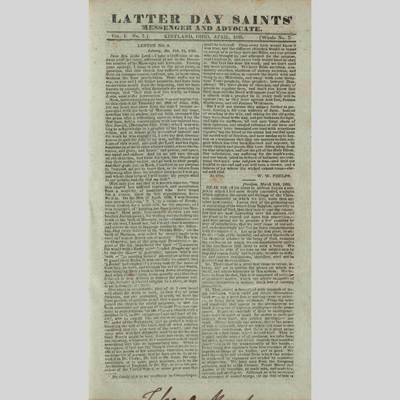 Dear Bro. in the Lord:—I take a little time to answer your 3rd letter, addressed to me in the December number of the Messenger and Advocate. Passing your apology, I come at once to the great point, in question, that this church has suffered persecution from its commencement; and that, too, in most cases, without the least provocation. Here suffer me to say, as you and I are fellow members, and have been co-servants nearly from the beginning, that we have known by example, what thousands are preaching in precept, that “they that will live Godly in Christ Jesus, must suffer persecution.”

Now, notwithstanding my body was not baptized into this church till Thursday the 16th of June, 1831, yet my heart was there from the time I became acquainted with the book of Mormon; and my hope, steadfast like an anchor, and my faith increased like the grass after a refreshing shower, when I for the first time, held a conversation with our beloved brother Joseph, (December 24th 1830,) who I was willing to acknowledge as a prophet of the Lord, and to whom, and to whose godly account of himself and the work he was engaged in. I owe my first determination to quit the folly of my way, and the fancy and fame of this world, and seek the Lord and his righteousness,in order to enter a better world, where the duration, and glory, and honor, and power, and space, are equal and endless: And let me add that though all old churches, and some disciples, like Orpah may kiss their mother-in-law, and go back to their people, and their gods, yet, as Ruth, I am fixed in my purpose to “entreat me not to leave thee, or to return from following after thee: for whither thou goest I will go; and where thou lodgest I will lodge: thy people shall be my people, and thy God my God. ”

Well may you say that it is known unto me, “that this church has suffered reproach and persecution from a majority of mankind who have heard but a rumor, since its first organization,

&c.—So it is. On the 30th of April, 1830, I was thrown into prison at Lyons,* N. Y. by a couple of Presbyterian traders, for a small debt, for the purpose, as I was informed, of “keeping me from joining the Mormons.” How many hair-breadth escapes you and brother Joseph passed, for writing and publishing the truth in the book of Mormon, as the constitution and the law allowed, I know not, but I heard church members and others declare in language similar to the following: that every believer in the ‘Golden Bible,’ (as the book of Mormon was called by many) ought to be sued and sent or driven out of society. The Rochester Observer, one of the principal Presbyterian organs of the day, introduced the book of Mormon to the world with a flashy article headed Blasphemy! and to cap the climax of gullibility, against which the ‘men of the meeting houses’ showed an ardent zeal to guard their flocks, it was carefully circulated, that ‘a Jesuit’ had employed a young man by the name of Cowdery, to write, and through the aid of one Smith, was bringing forth a book to break down all religions. And when it came forth, some actually said that they believed it was written to destroy the present religions, because it carried religion to a nicer, or higher pitch than the old Bible.

One thing is remarkable, that of all I ever heard said about the work or book, in that day of gross darkness, not one pretended, in truth, to have the least particle of positive proof, that a man or woman joined the church for sinful purposes, or that the book contained one precept of doctrine that was contrary to pure religion; ‘but the idea of a church with a prophet in it, in this * My family sick at my residence in Canandaigua. enlightened age and land of liberty, was so exactly like old times; so agreeably to the order of the Scriptures, and so perfect a way of knowing the will of the Lord, and of what religion consisted, that the wise men of the world, and the wary who, watched diligently over their flocks, that their fleeces might be long, white and clean, against the shearing, whispered, and sometimes talked aloud something very like or approaching this: What is the reason, if God has any thing to reveal for the benefit of his people or his numerous churches, as he is no respecter of persons, that he does not do it, or reveal it to Dr. Clarke, Dr. Gill or Dr. Scott, the commentators, or to some great minister, such as the Archbishop of England, or Dr. Ely, or even the president of the United States, or some great man that could be believed? Then every body would know it was true, and the different churches would be bound to accept of it as they have the Bible, and our priests who are brought up and educated for the purpose, could explain it, and every body would have to obey it. But God has done his work, and we don’t need any more prophets. We have Bible societies, missionary societies, abolition of slavery societies, and temperance societies, to convert the world with and bring in the Millenium, and away with your deception! False prophets, false prophets, beware! Blasphemy! We have plenty of churches, and plenty of priests to regulate them, and don’t you know that God, man and the Devil will oppose you? If you start a church with a prophet in it, every body will be against you, as they were against Ann Lee, Joanna Southcoate, and old Jemima Wilkinson.

But I will not pursue the subject further at present, leaving it for your addition of facts.

Instead of standing in the way, and asking for the old paths, they have stood in the way, and put darkness for light, and light for darkness, till not only ‘large sheets of their opinions, and attested volumns of our lives and characters,’ have ‘ inundated our land with scurrilous reports,’ but the blood of the saints has curdled upon the sacred soil of freedom, and now smokes up to heaven as a testimony that they are martyrs to that religion which has ever been despised and rejected, by every church and people that have fallen away from its true principles, and lost the gift of the Holy Ghost. Our tribulation, our suffering for the truth’s sake, and our blood, (shed in defence of holiness) are testimony that says: your religion is true—and hold out faithful to the end and you will earn a crown, and a fulness of joy where the wicked cannot come— eternal with God.