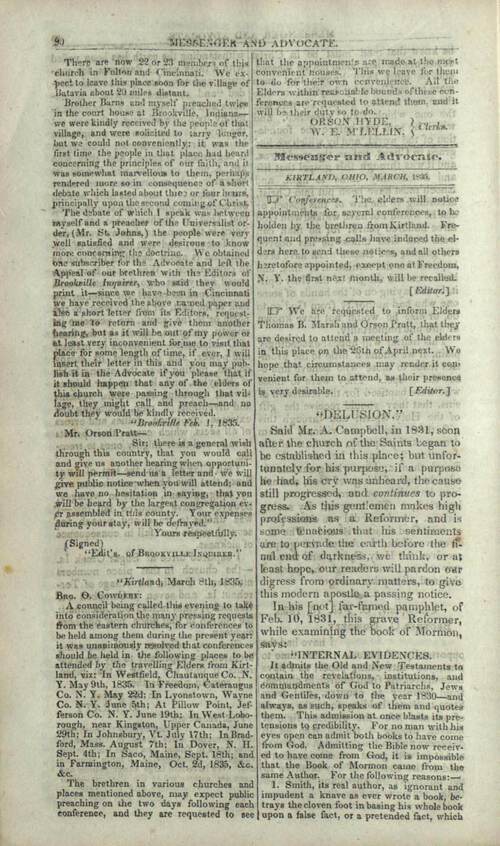 Said Mr. A. Campbell, in 1831, soon after the church of the Saints began to be established in this place; but unfortunately for his purpose, if a purpose he had, his cry was unheard, the cause still progressed, and continues to progress. As this gentlemen makes high professions as a Reformer, and is some tenacious that his sentiments are to pervade the earth before the final end of darkness, we think, or at least hope, our readers will pardon our digress from ordinary matters, to give this modern apostle a passing notice.

It admits the Old and New Testaments to contain the revelations, institutions, and commandments of God to Patriarchs, Jews and Gentiles, down to the year 1830—and always, as such, speaks of them and quotes them. This admission at once blasts its pretensions to credibility.

1. Smith, its real author, as ignorant and impudent a knave as ever wrote a book, betrays the cloven foot in basing his whole book upon a false fact, or a pretended fact, which [90] makes God a liar. It is this:—With the Jews God made a covenant at Mount Sinai, and instituted a priesthood, and a high priesthood. The priesthood he gave to the tribe of Levi, and the high priesthood to Aaron and his sons for an everlasting priesthood.—He separated Levi, and covenanted to give him this office irrevocably while ever the temple stood, or till the Messiah came.”

Mr. Campbell attempts by a single stroke, to overthrow the validity of the book of Mormon, by bringing forward the institution of the priesthood, conferred upon Aaron and his sons, but we are willing to go the whole length in this matter of priesthood, and say that it was conferred upon Aaron and his seed throughout their generations. Ex. 40:15. And thou shalt anoint them, as thou didst anoint their father, that they minister unto me in the priest’s office: for their anointing shall surely be an everlasting priesthood throughout their generations. We quote this passage because Mr. C. says, that it was only “while ever the temple stood, or till the Messiah came.” Israel’s God takes a longer stretch than this Rev. gentleman. He says “throughout their generations.” If the literal descendants of Aaron are no more, then this priesthood is lost from Israel, unless God bestows it upon another family; but if not, not.

But Mr. C. says “while ever the temple stood, or till the Messiah came.”—By-the-by the temple was not reared when this covenant was made, neither does the Lord mention it, nor the Messiah at the time: it is only one of this Reformer’s new fashioned spiritualizing systems.—we have not yet learned it.

This is not all: He says that the scripture teaches, that a person of another family who should come near, when this holy ordinance [sacrifice] was being performed, should be put to death. We know that, “the stranger, who cometh nigh, shall be put to death,” and that the heathens were called strangers, but not the children of Israel.

Again: Lehi and his sons, who were descendants of Joseph, offered sacrifice, and this is enough to “blast the pretensions of the book of Mormon, to credibility.”

Now, as it is, and very correctly too, Lehi and his sons were blessed with the high priesthood—the Melchesedek priesthood. They never made any pretence that they were descendants of Aaron, or ever received that priesthood which was conferred upon him by the hand of Moses, at the direction of the Lord.

How did it happen that Moses had authority to consecrate Aaron a priest? Where did he get his authority to arrange the tabernacle, ark, &c.? Who laid hands upon him? Had he authority to “come near” when the Lord was entreated by sacrifice? He was Aaron’s brother, to be sure, but Aaron was the high priest.

Should Mr. C. finally learn, that Moses received the holy priesthood, after the order of Melchesedek, under the hand of Jethro, his father-in-law, that clothed with this authority he set Israel in order, and by commandment ordained Aaron to a priesthood less than that, and that Lehi was a priest after this same order, perhaps he will not raise so flimsey an assertion, as he does when he says the validity of the book of Mormon is destroyed because Lehi offered sacrifice; and perhaps, also, he may not be quite so lavish with his familiar titles as he was when he called brother Smith “as impudent a knave as ever wrote a book!!”

This is a mere specimen: “This ignorant and impudent liar, [bro. Smith] in the next place, makes the God of Abraham, Isaac and Jacob, violate his covenants with Israel and Judah concerning the land of Canaan, by promising a new land to a pious Jew.”

We know that God promised to give the land of Canaan to Abraham and his seed, but we have yet to learn where he said that he would not give them any more. Mr. C. will find, in the 49th of Genesis, where Jacob declared that his blessings had prevailed above those of his progenitors unto the utmost bounds of the everlasting hills, and that he confers them upon the head of his son Joseph, of whom Lehi was a descendant.

Why all this parade about the bless- [91] ing of Joseph, if he were only to inherit an equal proportion of the land of Canaan? Surely the Messiah was never promised through his lineage, or descendants: then why say so much about Joseph? But we quote another verse from the same chap. which makes the subject sufficiently plain only to a man who has been crying Millennium! Mellennium!! some four or five years, without ever giving his hearers one solitary scroll to point them to the word of God for a preparatory guide to be prepared for that august period!

Now, if some friend of ours, or even the editor of the Millenial Harbinger, will be so kind as to solve one mystery on the subject of Joseph’s blessing, he will do us a favor. Place Joseph in the land of Canaan and never suffer his descendants to go out, and then set him to push the people together to [from] the ends of the earth, and if you do not see a new thing under the sun, it will be because the Millenial Harbinger has gathered Israel from the four winds, and left them all standing where they now are!

If the Lord promised, (which he did,) the land of Canaan to Abraham, and Jacob’s blessing had prevailed above that, to the utmost bounds of the everlasting hills, where could he find it? Not in the land of Canaan, merely, though Mr. C. has the daring effrontery to say that if God should take any of the seed of Jacob to any other part of the earth, he would violate his covenant which he had previously made!—How does he know it?

With his boasted knowledge he will not be disturbed if we give our readers another specimen:

“The pious Jews in the captivity turned their faces to Jerusalem and the holy place, and remembered God’s promises concerning the place where he recorded his name. They hung their harps upon the willow trees, and could not sing the songs of Zion in a foreign land; but the Nephites have not a single wish for Jerusalem, for they can, in their wig wam temple, in the wilderness of America, enjoy more of God’s presence than the most righteous Jew could enjoy in that house of which David had rather be a door-keeper than to dwell in the tabernacles of men.

And all this too, when God’s only house of prayer, according to his covenant with Israel, stood in Jerusalem.”

Here are further secrets unfolded.—We remember to have read, in the 137th Ps. either a history of what had taken place, or a prophecy concerning something to come, and which, in the days of David was yet to transpire;—but the lamentation was uttered by those who were in distress and mocked by the heathen. The reader will also remember that Solomon, the son of David, built the Temple, and how, we ask, could David be a door-keeper in the same, when it was not reared until his earthly tabernacle was crumbling to dust? But it does very well for Mr. C.—he can get him up there with songs of thanksgiving, waiting before God, and keeping the doors of his sacred Temple, and not a stone of it yet laid!!

We remember also to have read a sublime sentence uttered by the mouth of a prophet, in the name of the Lord, something like this: “Thus saith the Lord, the heaven is my throne, and the earth is my footstool: Where is the house that ye build unto me? And where is the place of my rest? For all those things that my hand has made.” Solomon, who built the Temple, of which Mr. C. says David desired to be a door-keeper, after he was gathered to his fathers, says: “But will God indeed dwell on the earth? Behold, the heaven, and heavens of heavens cannot contain thee.”

Now, if God’s presence and glory fill the heavens, is he not sufficient to fill more than one small house like that built at Jerusalem? and has not a man, endowed with the holy priesthood, after the order of Melchisedek, authority to build a house to the honor of HIS name, and especially, when the worship of that at Jerusalem was corrupted, or it thrown down? We have yet to be informed when the Lord said that he would not fill another house with his glory, as he did that at Jerusalem, or when he ever said that the descendants of Joseph should be cursed, if they should build another like that, when enjoying the promised blessing, made to them by the mouth of God, through [92] Moses, that they should possess the ends of the earth.

Our readers will understand that these extracts are taken from Mr. C.’s writings of 1831, and if occasion requires, we shall give them a specimen of his writings since, in a future number, and then close with this gentleman forever. —[ Editor.]