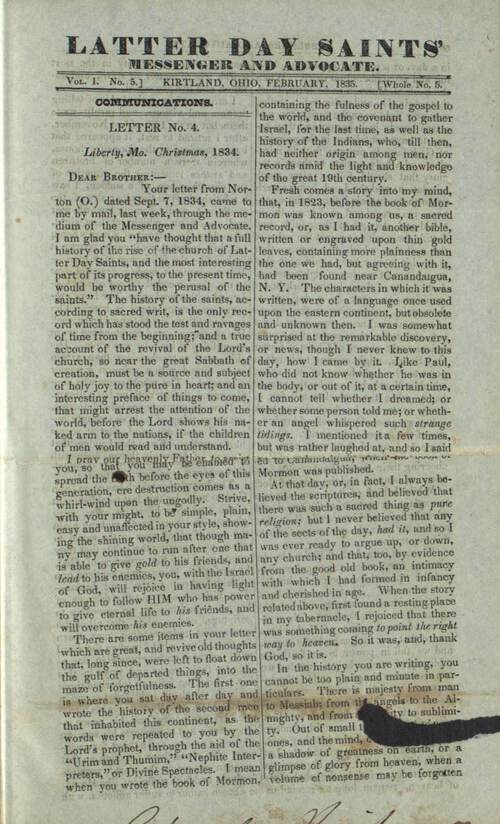 Your letter from Norton (O.) dated Sept. 7, 1834, came to me by mail, last week, through the medium of the Messenger and Advocate. I am glad you “have thought that a full history of the rise of the church of Latter Day Saints, and the most interesting part of its progress, to the present time, would be worthy the perusal of the saints.” The history of the saints, according to sacred writ, is the only record which has stood the test and ravages of time from the beginning; and a true account of the revival of the Lord’s church, so near the great Sabbath of creation, must be a source and subject of holy joy to the pure in heart; and an interesting preface of things to come, that might arrest the attention of the world, before the Lord shows his naked arm to the nations, if the children of men would read and understand.

I pray our heavenly Father to assist you, so that you may be enabled to spread the truth before the eyes of this generation, ere destruction comes as a whirl-wind upon the ungodly.

Strive, with your might, to be simple, plain, easy and unaffected in your style, showing the shining world, that though many may continue to run after one that is able to give gold to his friends, and lead to his enemies, you, with the Israel of God, will rejoice in having light enough to follow HIM who has power to give eternal life to his friends, and will overcome his enemies.

There are some items in your letter which are great, and revive old thoughts that, long since, were left to float down the gulf of departed things, into the maze of forgetfulness. The first one is where you sat day after day and wrote the history of the second race that inhabited this continent, as the words were repeated to you by the Lord’s prophet, through the aid of the “Urim and Thumim,” “Nephite Interpreters,” or Divine Spectacles. I mean when you wrote the book of Mormon, containing the fulness of the gospel to the world, and the covenant to gather Israel, for the last time, as well as the history of the Indians, who, till then, had neither origin among men, not records amid the light and knowledge of the great 19th century.

Fresh comes a story into my mind, that, in 1823, before the book of Mormon was known among us, a sacred record, or, as I had it, another bible, written or engraved upon thin gold leaves, containing more plainness than the one we had, but agreeing with it, had been found near Canandaigua, N. Y. The characters in which it was written, were of a language once used upon the eastern continent, but obsolete and unknown then. I was somewhat surprised at the remarkable discovery, or news, though I never knew to this day, how I came by it. Like Paul, who did not know whether he was in the body, or out of it, at a certain time, I cannot tell whether I dreamed; or whether some person told me; or whether an angel whispered such strange tidings.

I mentioned it a few times, but was rather laughed at, and so I said no more about it, till after I had removed to Canandaigua, when the book of Mormon was published.

At that day, or, in fact, I always believed the scriptures, and believed that there was such a sacred thing as pure religion; but I never believed that any of the sects of the day, had it, and so I was ever ready to argue up, or down, any church, and that, too, by evidence from the good old book, an intimacy with which I had formed in infancy and cherished in age. When the story related above, first found a resting place in my tabernacle, I rejoiced that there was something coming to point the right way to heaven. So it was, and, thank God, so it is.

In the history you are writing, you cannot be too plain and minute in particulars. There is majesty from man to Messiah; from the angels to the Almighty, and from simplicity to sublimity.

Out of small things proceed great ones, and the mind, or memory, retains a shadow of greatness on earth, or a glimpse of glory from heaven, when a volume of nonsense may be forgotten [65] in a day, or a nation dropped into oblivion and remembered no more. When the book of Mormon came forth, those that received it, and embraced its truths, saw new light upon the scriptures, and a true beauty in holiness; and they began to have confidence in the promises of God; faith in prayer; faith in miracles, and a holy anxiety to share in the glory that should follow, after much tribulation: and the Lord, being merciful to them, in their infancy and weakness, performed and said many things to aid and strengthen their faith, and fortify their minds against the wiles of the evil one, which, like many other good things may have again been shut up in heaven for a day of righteousness. A momento of them, in the work under consideration, may be a day-star to thousands, yet groping in the regions of mental darkness; yea, may I not say, that a sketch of some of the revelations to the church of Christ of Latter Day Saints, might answer as hands to point to the light-house of the skies, which will only be seen by the pure in heart, when the “black-coat” fog of many centuries, has been driven back to its own place, by the refreshing breezes of the gospel in its purity. O welcome day! would thou wast here, that the saints might see the towers of Zion in precious beauty and golden splendor, cheering their native land, with the music of heaven, and the glory of God!

While I think of it, let me ask you to explain, or state what the angel said when he informed brother J. S. jr. that a treasure was about to come forth to this generation.

The next item I shall notice, is, (a glorious one,) when the angel conferred the “priesthood upon you, his fellow servants.” That was an august meeting of men and angels, and brought again, upon earth, the keys of the mysteries of the kingdom of God. I am aware that our language lacks terms, and we fail in power to set forth the sublimity of such a holy scene, but who can remember the glory and tell the appearance in such words as we have, and let God add the majesty and omnipotence to the sacred interview. Our ancient brethren were careful to notice angel’s visits, and note what they said, and how careful ought we to be? Let church history tell.

The impressions made upon our minds by the inhabitants of heaven, remain long to remind us that there is an eternity in the next world, where matter or spirit, and duration and life are equal.

I am not often in the habit of telling dreams and visions, and rarely write them, but on the16th of last November, after I retired to rest, it appeared that I was standing in the door of a house, wherein were a number of brethren and sisters lamenting the situation of the church, when, of a sudden, I saw a whitish cloud in the clear sky of the south east, gently coming towards me; and something, which, at first sight, resembled the portrait of a man’s head; but, in a moment, as it came nearer, it looked like the full image of a man.—When nearest it made a graceful bow to me, then receded till out of sight.—I cried with a loud voice, The Lord preserve us for an angel is here! The Lord is with us, for his angel has come!! His appearance and countenance were beautiful; and his robe was white. His skin was a touch nicer than the virgin snow, tinged with a crimson glimmer of sun-set. The whole scene was simply grand, though nothing but a dream.

Now my natural eyes beheld not this, yet every thing of it, is so strongly impressed upon my mind, that it seems like a reality. From this I judge, that a scene of heavenly things, seen with the naked eye, is so perfectly retained, that you can give every particular.

The knowledge which has come from God to man, by this last establishment of the true church, is, at once, very glorious and very great, making plain the reward of all men in the world to come, and showing the saints that they must come into the presence of God, by perfection, being one in baptism, one in faith and one in the Lord Jesus.—The vision points out the degrees of happiness and misery, so agreeably to scripture, and so plain, that all of the commonest understanding, may learn for themselves what kingdom the Lord will give them an inheritance in, according to their works and ways in this life. After the fall man inherited three desires, which, if indulged beyond a given latitude, vitally destroys his pleasure, his prosperity and his peace.—They are a lust to generate his species; a love for money, and a thirst for greatness. To check these passions, so that one can overcome the world, requires fortitude and faith sufficient, like Moses, to choose rather to suffer affliction with [66] the people of God, than to enjoy the pleasures of sin for a season.