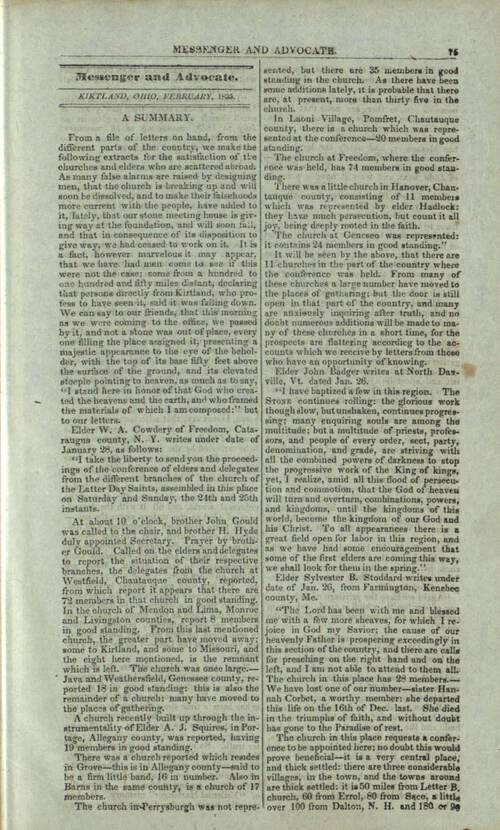 From the foregoing extracts if may be seen, how much truth there is in the reports which are circulated by many of all parties and sects. We are confident that there never has been a time since the church commenced, that the prospects have been more flattering than they are at present. In all parts of our country, multitudes are enquiring after truth. So numerous are the calls, that if the number of elders were three to every one, they could not supply them. These facts are opening the eyes of some of the worst of our enemies, among whom is A. Campbell, of “Millennial Harbinger” memory. He has recently began to howl most prodigiously; [76] calling upon the people in great agony to read Mr. How’s book, as a sure antidote against delusions. As this is all that Mr. Campbell can do, or dare do, we do not wish to deprive him of this privilege.

So we say concerning Alexander, Dudley and co. let them exert themselves with all their power, for they will find it a harder task to “kick against the pricks,” than to reform, as they call it, masons and sectarians,—they have undertaken a task to great for them: the arm of Omnipotence is too potent for “school boys,” and this they will find after they have exausted all their power.

The “black speck” will still “stain the American character,” for the people will receive the everlasting gospel, nor can men nor devils prevent it. The people may rage and the heathen imagine a vain thing; but HE who sits in the heavens will laugh, the Lord will have them in derision, and ere long, he will speak to them in his wrath and vex them in his sore displeasure.

Mr. Campbell has been invited to show himself a man of principle—after repeated insults to the church of the “Latter Day Saints,” and to exchange papers and cut a quill like a man; but seeing he dare not do it, (for notwithstanding the confidence which his satallites have in him, he knows the weakness of his cause too well to hazard an investigation with an Elder of the church of the “Latter Day Saints,”) we consider this effort of his in the same point of light which we do a whipet spannel, when he is afraid to face his enemy, he turns his hind parts and barks—so bark on Alexander.