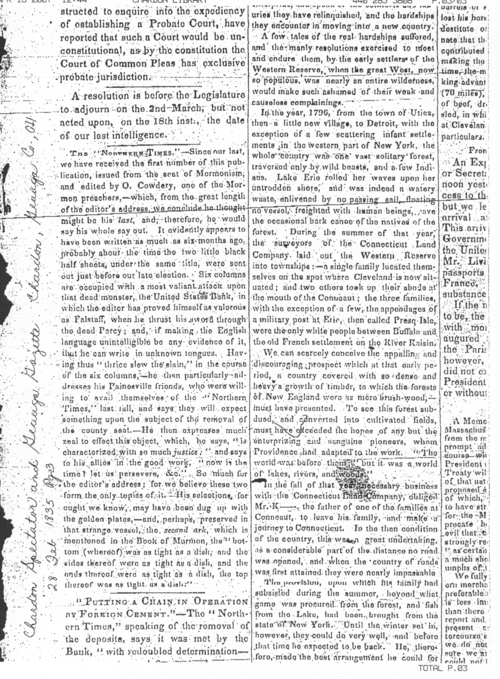 THE “NORTHERN TIMES.” —Since our last, we have received the first number of this publication, issued from the seat of Mormonism, and edited by O. Cowdery, one of the Mormon preachers,—which, from the great length of the editor’s address, we conclude he thought might be his last, and, therefore, he would say his whole say out. It evidently appears to have been written as much as six-months ago, probably about the time the two little black half sheets, under the same title, were sent out just before our late election. Six columns are occupied with the most valiant attack upon that dead monster, the United States Bank, in which the editor has proved himself as valorous as Falstaff, when he thrust his sword through the dead Percy; and, if making the English language unintelligible be any evidence of it, that he can write in unknown tongues.

Having thus “thrice slew the slain,” in the course of the six columns,—he then particularly addresses his Painesville friends, who were willing to avail themselves of the “Northern Times,” last fall, and says they will expect something upon the subject of the removal of the county seat.

—He then expresses much zeal to effect this object, which, he says, “is characterized with so much justice,” and says to his allies in the good work, “now is the time! Let us persevere, &c.”