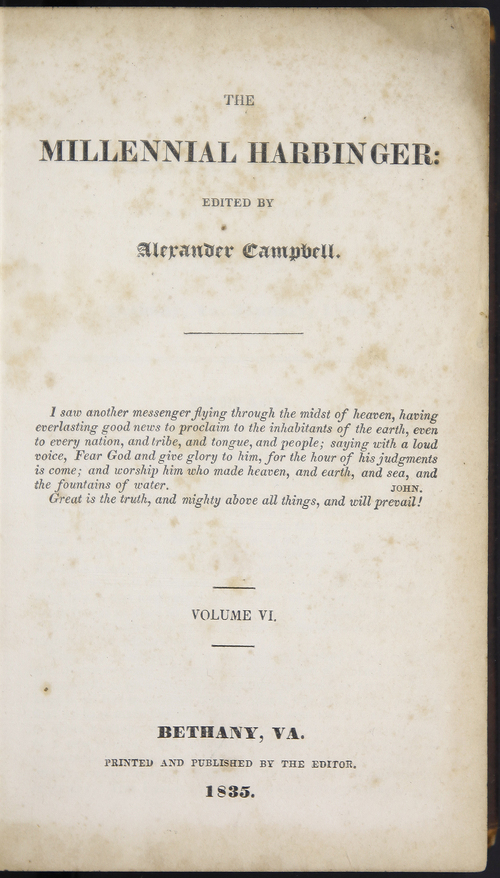 ‘Mormonism Unveiled, or a faithful account of that singular imposition and delusion, from its rise to the present time; with sketches of the characters of the propagators, and a full detail of the manner in which the GOLDEN BIBLE was brought before the world. To which are added, inquiries into the probability that the historical part of the said Bible was written by one Solomon Spalding, more than twenty years ago, and by him intended to have been published as a romance.—By E. D. Howe: Painesville, Ohio. Printed and published by the author. 1834.”

WE feel authorized to say, from the perusal which we have bestowed upon this work, that the title-page is no false flag or deceitful label, but that it is as honest a face as is generally to be met before a preface in any of the publications of the present day. Great labor, and care, and solicitude have been bestowed by its author upon the question of the ‘Golden Bible,’ and the facts involved in the history of this most impudent and atheistical affair.

No man, not already duped, who has the half of five grains of common sense, can read this narrative of Mormonism without being converted to the belief that Joseph Smith and his colleagues in the plot are a band of the most unprincipled deceivers that ever disgraced any age or nation, and that his followers are a set of superlative fanatics. This book furnishes demonstration not to be questioned of two singular problems in the history of man—

1st. That fanaticism is a mental distemper, more incurable than the leprosy.

2nd. That the more glaring and shameless the absurdity, the more determined and

Perhaps we were too sanguine when we thought that the fable was so barefaced that it could not stand upon its legs or palms in the face of day and the American people; but it appears that there are some great knaves, some as great simpletons, and some as dark spots in the United States as in any land on earth; and therefore it is necessary that this book of facts and good arguments should be thrown in the way of this deceived and deceiving band of impostors. I wish it could pioneer the way of the Mormons; for if once the delusion is tasted, there is little or no hope. The waters of Lethe in their fabled powers of stupefaction, were not half so efficient as the infatuations of Mormonism. The humane part of the community are, and I doubt not will, feel themselves indebted to Mr. Howe for the labor and expense incurred by him in the detection of this fraud.