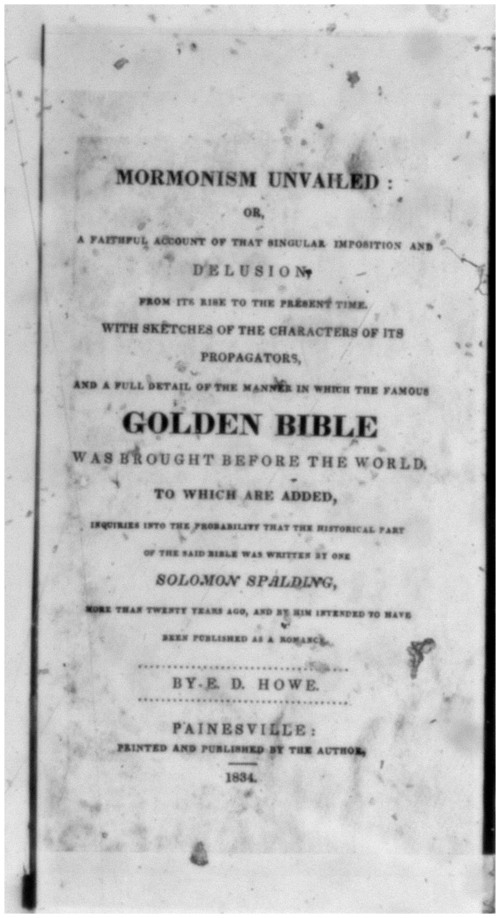 THE following work was undertaken with reluctance, at the earnest solicitation of a great number of friends, who had, with the author, long looked upon the subject of which it treats, with mingled feelings of abhorence and pity—the Impostors and their victims of delusion, were viewed through these two different media. The truth, and the whole truth, have been his constant aim : But the difficulty of procuring, or arriving at the whole truth, in relation to a religious imposition, which has from its birth been so studiously vailed in secrecy, and generally under a belief that the judgments of God would follow any disclosures of what its votaries had seen or heardCwill be readily discovered. He fears, therefore, that the half is yet untold. He has, in all his enquiries, endeavored to pay the most rigid regard to all the ordinary methods of eliciting truth, from every source within his reach. If he shall have failed in his desires and exertions, in any important particular, it will be a matter of regret. That his statements should fully escape censure or contradiction, by a sect whose foundation was falsehood, and which has been built up of the same material, is more than he can expect. He is fully persuaded, nevertheless, that sufficient, and more than sufficient, has been developed by unimpeachable testimony, to satisfy every rational person, whose mind has not already been prostrated by the machinations of the Impostors, that the Supreme Being has had as little agency in the prosperity of Mormonsim, as in the grossest works of Satan.

OF all the impositions which “flesh is heir to,” none ought to be more abhorred or dreaded, than those which come in the garb of sanctity and religion : But that none are more ardently seized upon and cherished, by a certain portion of mankind, all history goes to substantiate. Absurdities, like comets, move in orbits both eccentric and peculiar. At one time they are obscured and lost in distance ; then again they are to be seen shining with a full face, frightening silly mortals from their sphere, and turning into chaos the majesty of mind.

Astronomy has scarcely taught us to foretel the appearance of the one ; but metaphysics will enable us to calculate the periodical return of the other, when it shall have enabled us to fathom the abysses of the human mind, and discover the srpings of human action.

There is nothing more curious than the connection between passion and credulity—and few things more humiliating and extraordinary, than the extent to which the latter may be carried, even in minds of no vulgar order, when under the immediate influence of any strong interest or excitement. It is also true that we have frequently to encounter a perverse incredulity 1 and a callous insensibility to evidence, when we attempt to convince any one of what is contrary to his opinions, wishes or interests. But this is only another exemplification of the remarkable fact, that where any object, whether desirable, detestable, or dreadful, agitates the mind to a certain degree, our belief is very far from being regulated by the weight of testimony. In such a frame of mind, men are not in a situation to listen to the sug- [v] gestions of sober reason ; their attention is rivited to one particular view ; they form their opinions with seeming deliberation, from circumstances which would be little regarded by minds of a sounder state, but which, seen through the medium of a distorted imagination, appear with an overpowering magnitude ; and in fact, if a deep impression is made by any recital seriously delivered, or by any idea whose falsehood is not manifest, the strength of the impression is very apt to be mistaken for a sure proof of its reality. Even in cases where the greatest calmness and deliberation might be expected, and among those whose profession it is to investigate truth—the ambition of founding a sect, or displaying intellectual superiority—the veneration for great names, or long established opinions—and the anxiety to penetrate into the mysteries of nature—have sometimes produced, not modest querists and patient inquirers, but zealous preachers and zealous believers of the most fanciful creeds of philosophy ; about the influence of the stars ; the whirlpools that guide the planets in their course ; about the concavity or internal regions of the earth ; and about the formation of the skull as furnishing a sure index to the passions and propensities.

If such dreams are indulged in the calm investigation of philosophy, what are we to expect when the mind is dazzled by supernatural objects, animated by supernatural hopes, and pressed upon the understanding by supernatural terrors? Our wonder therefore ceases, that mankind apparently delight in being misled by the grossest delusions ; that the pure truths of Christianity are so strangely mingled with the wildest fancies that can be imagined by the lunatic, or invented by the designing knave.

“Every age of the world has produced impostors and delusions. Jannes and Jambers withstood Moses, and were followed by Pharaoh, his court and clergy. To say nothing [vi] of the false prophets of the Jewish age, the diviners, soothsayers, the magicians, and all the ministry of idols among the Gentiles, by which the nations were so often deceived, the Impostors which have appeared since the Christian era, would fill volumes of the most lamentable details. The false Messiahs which have afflicted the the Jews since their rejection of Jesus Christ, have more than verified the predictions of the “true and faithful witness.” No less than twenty-four distinguished false Messiahs have disturbed the Jews. Many were deceived, and myriads lost their lives through their impostures. Some peculiar epochs were more distinguished for the number and impudence of those Impostors. If the Jews had fixed upon any year as likely to terminate their dispersion, and as the period of their return, that year rarely failed to produce a Messiah. Hence in the 12th century, no less then ten false Messiahs appeared. Numerous have been the impostors among Christians, since the great apostacy began ; especially since and at the time of the reformation. Munzer, Stubner and Stork were conspicuous in the 16th century. These men taught that among Christians, who had the precepts of the Gospel to guide them, and the spirit of God to direct them, civil offices and laws were not only unnecessary, but an unlawful encroachment upon their spiritual liberty ; that all Christians should put their possessions into common stock ; and that polygamy was not incompatible with either the Old or New Testaments.

They related many visions and revelations which they had from above, but failing to propagate their doctrines by these means, they attempted to enforce them by arms. Many Catholics joined them, and in the various insurrections which they effected, one hundred thousand souls are said to have been sacrificed.

“Since the millennium became a subject of much speaking and writing, Impostors have been numerous. In the mem- [vii] ory of the present generation, many delusions have been propogated and received, to a considerable extent. The Shakers, styling themselves the “Millennium Church,” a sect instituted by ANN LEE, in 1774, still maintain a respectable number.

This “elect lady,” as they sometimes styled her, was the head of the party, and gave them a new bible. They asserted that she spoke seventy-two different tongues, and conversed with the dead.

Through her all blessings flowed to her followers. She appointed the sacred dance and the fantastic song ; and consecrated shivering, swooning, and falling down, acts of acceptable devotion. They hold all things in common, rank marriage among the works of the flesh, and forbid all sexual intercourse.

In 1792, Richard Brothers published a book of prophecies and visions, and an account of his daily intercourse with God, in London. He too had his followers ; and among them a member of the British Parliament, a profound scholar and one of the most learned men of his time. He even made a speech in the House of Commons, declaring his full belief in one of the craziest pieces of absurdity that was ever presented to a British populace.

Joanna Southcott, the most disgusting old hag that ever pretended to ‘set up for herself,’ in the business of blasphemy and dupe-making, was countenanced and encouraged by respectable and wealthy individuals in England ; who, not only believed in the divine origin of her ministrations, but swallowed with most implicit faith, her “Dialogue with the Devil,” a farrago of filthy licentiousness that would suffuse the face of a fisherwoman. By her arts of deception she succeeded in procuring the certificate of a respectable physician the she was pregnant of the Holy Ghost.

In Scotland a few years since, a Miss Campbell pretended to have come back from the dead, having the “gift of tongues,” was believed in by many of the Clergy and Bar, [viii] and carried along with her a numerous train of lesser note. The pretensions of Jemima Wilkinson, the Barkers, Jumpers and Mutterers, of our own time and country, are also well remembered.

But at these things we only intended to hint, in this place, in order to prepare the mind for a detailed account of the more recent, more absurd, and, perhaps more extensive, delusion of MORMONISM. It will present in somewhat a new light, to the enquiring mind, the depths of folly, degradation and superstition, to which human nature can be carried. It will show that there is no turning a fanatic from his folly—that the distemper is more incurable than the leprosy—that the more glaring the absurdity, the more determined the tenacity of its dupes—and the more apparent you can render the imposture, the stronger become its advocates.

Our object, therefore, in the present undertaking, will not be so much to break the spell which has already seized and taken possession of great numbers of people in our enlightened country, as to raise a warning voice, to those who are yet liable, through a want of correct knowledge of the imposition, to be enclosed within its fetters.

We make no pretensions to literary merit, and anticipate adding but little to the common stock of useful information. What is related, is in a plain, unvarnished style ; such as we hope will be the more beneficial to those who are most usually obnoxious to religious impositions.