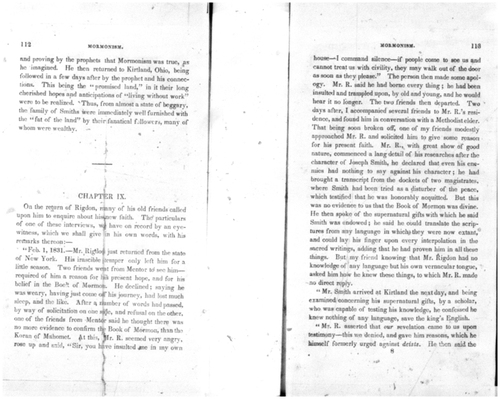 On the return of Rigdon, many of his old friends called upon him to enquire about his new faith. The particulars of one of these interviews, we have on record by an eyewitness, which we shall give in his own words, with his remarks thereon:—

“Feb. 1, 1831.—Mr. Rigdon just returned from the state of New York. His irascible temper only left him for a little season. Two friends went from Mentor to see him—required of him a reason for his present hope, and for his belief in the Book of Mormon. He declined ; saying he was weary, having just come off his journey, had lost much sleep, and the like. After a number of words had passed, by way of solicitation on one side, and refusal on the other, one of the friends from Mentor said he thought there was no more evidence to confirm the Book of Mormon, than the Koran of Mahomet. At this, Mr. R. seemed very angry, rose up and said, “Sir, you have insulted me in my own [112] house—I command silence—if people come to see us and cannot treat us with civility, they may walk out of the door as soon as they please.” The person then made some apology. Mr. R. said he had borne every thing ; he had been insulted and trampled upon by old and young, and he would hear it no longer. The two friends then departed.

Two days after, I accompanied several friends to Mr. R.’s residence, and found him in conversation with a Methodist elder. That being soon broken off, one of my friends modestly approached Mr. R. and solicited him to give some reason for his present faith. Mr. R., with great show of good nature, commenced a lang detail of his researches after the character of Joseph Smith, he declared that even his enemies had nothing to say against his character ; he had brought a transcript from the dockets of two magistrates, where Smith had been tried as a disturber of the peace, which testified that he was honorably acquitted. But this was no evidence to us that the Book of Mormon was divine. He then spoke of the supernatural gifts with which he said Smith was endowed ; he said he could translate the scriptures from any language in which they were now extant, and could lay his finger upon every interpolation in the sacred writings, adding that he had proven him in all these things. But my friend knowing that Mr. Rigdon had no knowledge of any language but his own vernacular tongue, asked him how he knew these things, to which Mr. R. made no direct reply.

“Mr. Smith arrived at Kirtland the next day, and being examined concerning his supernatural gift, by a scholar, who was capable of testing his knowledge, he confessed he knew nothing of any language, save the king’s English.

“Mr. R. asserted that our revelation came to us upon testimony—this we denied, and gave him reasons, which he himself formerly urged against deists. He then said the [113] old revelations were confirmed by miracles, but the Book of Mormon would not be; it was not designed to be thus confirmed. (And Mahomet said, nearly twelve centuries ago, ‘Moses and Jesus were empowered to work miracles, yet the people did not receive them, wherefore, God had sent him without that attestation, to be the last and greatest prophet.’) But in this Mr. R. contradicted his book, for that declares it is to be thus established.

“We then asked Mr. R. what object we could have, in receiving the Book of Mormon— whether it enjoined a single virtue that the Bible did not, or whether it mentioned or prohibited a single additional vice, or whether it exhibited a new attribute of Deity ? He said it did not. ‘The Book of Mormon, (said he) is to form and govern the Millennial Church ; the old revelation was never calculated for that, nor would it accomplish that object ; and without receiving the Book of Mormon there is no salvation for any one into whose hands it shall come.’ He said faith in the Book of Mormon was only to be obtained by asking the Lord concerning it. To this, scriptural objection were made. He then said, if we have not familiarity enough with our Creator to ask of him a sign, we were no Christians; and that, if God would not condescend to his creatures, in this way, he was no better than Jugernaut ! ! !

“Thus I have given a simple statement of facts. They proclaim the ancient gospel, putting their own appendages to it. When they think it will best suit their purpose, they say nothing about the Book of Mormon, and at other times make it their chief topic. Mr. R. said it was no part of his religion to defend the Book of Mormon, he merely wished the people to give heed to the old revelation. Again, there is no salvation without believing the Book of Mormon.—Mr. R. now blames Cowdery for attempting to work miracles, and said it was not intended to be confirmed in that [114] way. How then are we to obtain faith ? Does the book offer any internal evidence of its divinity: It contains nothing but what might have been, and evidently was, borrowed from the sacred writings and from the history of the world. Was it so with the revelation that was from the beginning ? Far otherwise. Respecting Smith and his followers, do they give any proof of their honesty ? They can give none but their own assertions. They have no sacrifice to make—no loss of fortune or reputation to sustain. They are in a land of liberty—very different were the circumstances of those who first promulgated the faith “once delivered to the saints.” They had to forsake their friends and relations—leave their possessions, and forfeit their reputation.

Twelve apostles sealed their testimony with their blood. So, whether their religion was true or false, they proved their honesty. But Mormonism is to be proved, from beginning to end, by assertions, and this we have in whole numbers. But we know that they cannot more roundly and positively assert, than hundreds of impostures who have gone before them.”

From this point in the history of this delusion, it began to spread with considerable rapidity. Nearly all of their male converts, however ignorant and worthless, were forthwith transformed into “Elders,” and sent forth to proclaim, with all their wild enthusiasm, the wonders and mysteries of Mormonism. All those having a taste for the marvelous, and delighting in novelties, flocked to hear them.—Many traveled fifty and an hundred miles to the throne of the prophet, in Kirtland, to hear from his own mouth the certainty of his excavating a bible and spectacles.—Many, even in the New England States, after hearing the frantic story of some of these “elders,” would forthwith place their all into a waggon, and wend their way to the “promised land,” in order, as they supposed, to escape the [115] judgments of Heaven, which were soon to be poured out upon the land. The State of New York, they were privately told, would most probably be sunk, unless the people thereof believed in the pretensions of Smith.

On the arrival of Smith in Kirtland, he appeared astonished at the wild enthusiasm and scalping performances, of his proselytes there, as heretofore related. He told them that he had enquired of the Lord concerning the matter, and had been informed that it was all the work of the Devil. The disturbances, therefore, ceased. Thus we see that the devil, for the time being, held full sway in making converts to Mormonism.

[bottom of 145] Again, one of their leading articles of faith is, that the Indians of North America, in a very few years, will be converted to Mormonism, and through rivers of blood will again take possession of their ancient “inheritance.” As their bible pretends to be a record of the aborigines, every [145] effort will be made to inculcate a belief in it among them. To facilitate this project, was one strong ground for their establishing themselves in Missouri, knowing that the general government was taking active measure to remove all the Indians west of the Mississippi. Were it possible, therefore, for Mormonism to be inculcated among the tribes of the west, a religious spirit would be easily excited.—One of the imaginary prophets in the Book of Mormon, says that such events will take place. He says, “Therefore, I write unto you, Gentiles, (the whites,) and also unto you, house of Israel, (the Indians,) when the work shall commence (Mormonism) that ye shall be about to return to the land of your inheritance.” Again, in speaking to the Indians, “Know ye that ye are of the House of Israel. Know ye that you must lay down your weapons of war, and delight no more in the shedding of blood, and take them not again, save it be that God shall command you”—(through the mouth of Smith.) He also prophesyed that they should be “driven and scattered by the Gentiles,” and after that the Lord would remember his covenant with Abraham.—And then, “O ye Gentiles, how can ye stand before the power of God—therefore, repent ye, lest a remnant of the seed of Jacob (meaning the Indians) shall go forth among you as a lion, and tear you in pieces, and there is none to deliver.”