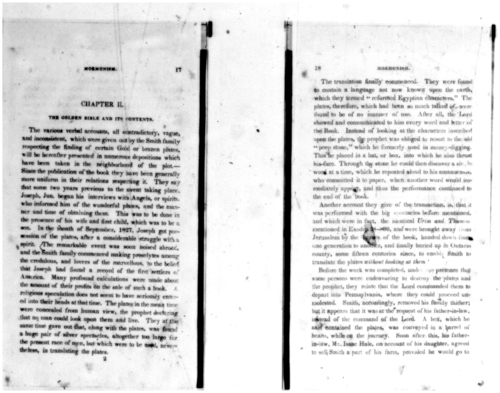 THE GOLDEN BIBLE AND ITS CONTENTS.

The various verbal accounts, all contradictory, vague, and inconsistent, which were given out by the Smith family respecting the finding of certain Gold or brazen plates, will be hereafter presented in numerous depositions which have been taken in the neighborhood of the plot.—

Since the publication of the book they have been generally more uniform in their relations respecting it. They say that some two years previous to the event taking place, Joseph, Jun. began his interviews with Angels, or spirits, who informed him of the wonderful plates, and the manner and time of obtaining them. This was to be done in the presence of his wife and first child, which was to be a son. In the month of September, 1827, Joseph got possession of the plates, after a considerable struggle with a spirit. The remarkable event was soon noised abroad, and the Smith family commenced making proselytes among the credulous, and lovers of the marvellous, to the belief that Joseph had found a record of the first settlers of America. Many profound calculations were made about the amount of their profits on the sale of such a book. A religious speculation does not seem to have seriously entered into their head at that time. The plates in the mean time were concealed from human view, the prophet declaring that no man could look upon them and live. They at the same time gave out that, along with the plates, was found a huge pair of silver spectacles, altogether too large for the present race of men, but which were to be used, nevertheless, in translating the plates. [17]

The translation finally commenced. They were found to contain a language not now known upon the earth, which they termed “reformed Egyptian characters.” The plates, therefore, which had been so much talked of, were found to be of no manner of use. After all, the Lord showed and communicated to him every word and letter of the Book. Instead of looking at the characters inscribed upon the plates, the prophet was obliged to resort to the old “peep stone,” which he formerly used in money-digging. This he placed in a hat, or box, into which he also thrust his face. Through the stone he could then discover a single word at a time, which he repeated aloud to his amanuensis, who committed it to paper, when another word would immediately appear, and thus the performance continued to the end of the book.

Another account they give of the transaction, is, that it was performed with the big spectacles before mentioned, and which were in fact, the identical Urim and Thumim mentioned in Exodus 28–30, and were brought away from Jerusalem by the heroes of the book, handed down from one generation to another, and finally buried up in Ontario county, some fifteen centuries since, to enable Smith to translate the plates without looking at them !

Before the work was completed, under the pretence that some persons were endeavoring to destroy the plates and the prophet, they relate that the Lord commanded them to depart into Pennsylvania, where they could proceed unmolested. Smith, accordingly, removed his family thither; but it appears that it was at the request of his father-in-law, instead of the command of the Lord. A box, which he said contained the plates, was conveyed in a barrel of beans, while on the journey. Soon after this, his father-in-law, Mr. Isaac Hale, on account of his daughter, agreed to sell Smith a part of his farm, provided he would go to [18] work and quit his impositions. He said he had given up his former occupation, and concluded to labor for a living. But, in a few weeks Harris made his appearance there, and soon after Cowdery, and Smith again commenced looking into the hat, and telling off his bible. In the mean time, Satan had made an assault upon Harris, and robbed him of one hundred and sixteen pages of the bible, which had been translated.

Cowdery was the chosen scribe to complete the work ; after which the plates were again buried up by the command of the Lord, in a place unknown to the prophet or any other person.

The Golden Bible was finally got ready for the press, and issued in the summer of 1830, nearly three years from the time of its being dug up. It is a book of nearly six hundred pages, and is, unquestionably, one of the meanest in the English, or any other language. It is more devoid of interest than any we have ever seen. It must have been written by an atheist, to make an experiment upon the human understanding and credulity. The author, although evidently a man of learning, studied barrenness of style and expression, without an equal. It carries condemnation on every page. The God of Heaven, that all-wise Being, could never have delivered such a farrago of nonsense to the world. But we must proceed to examine it more in detail. The title page says :—

It is necessary that the reader should constantly bear in mind, that the impostor is held out to be a very ignorant person, so much so, that he can write nothing except it be dictated to him, word by word, by the mouth of the Lord. Here then we have a specimen of a title page according to infinite wisdom ; constituting Joseph Smith, Jun. “Author and proprietor,” in order that he may have the sole profit of the work. Although the Mormon may have a faculty of pointing out examples, and proving every thing by scripture, we think it will trouble them to find an instance where the Great Jehovah has ever sent a message to fallen man, and that in the most miraculous way ; and constituted any individual its retailer, and sole sharer of its profits ! But we are told that “the ways of God are past finding out,” and he has therefore given to Joseph Smith a “copy right” to sell this last message, and that too from [20] under the hand and seal of “R. R. Lansing, clerk of the Northern District of New York.”

But a saving clause is inserted in the title page, and several times repeated in the book. It seems that neither the Lord or Smith, were willing to avow themselves the authors of the whole fable : “and now if there be fault, it be in the mistake of men” ! ! ! . Here then we have an acknowledgment that there may be faults, a bundle of truths and falsehoods, sent forth to imperfect man, without a single rule being given to distinguish one from the other ! ! ! Oh ! the credulity of man !

The real author, notwithstanding his studied ignorance, was well acquainted with the classics. The names of most of his heroes have the Latin termination of i, such as Nephi, Lehi, and Moroni. The word Mormon, the name given to his book, is the English termination of the Greek word “Mormoo,” which we find defined in an old, obsolete Dictionary, to mean “bug-bear, hob-goblin, raw head, and bloody bones.” It seems, therefore, that the writer gave his book not only a very appropriate, but classical name. His experiment upon the human mind, he thought, would be more perfect, by giving it a name, in addition to its contents, which would carry upon its very face the nature of its true character— a fiction of hob-goblins and bug-bears.

Next comes the “Preface,” signed “the Author,” which shows that the Lord was willing to approve and adopt the most modern plan of making books, by inserting a title page, copy right, and a preface. The substance of the preface is, that the author had translated one hundred and sixteen pages from the plates of Lehi, written by the hand of Mormon, which were stolen by some persons ; “and being commanded by the Lord, that I should not trans- “late the same over again, for Satan had put it into their [21] “hearts to tempt the Lord their God, by altering their “words, that they did read contrary from that which I “translated, and caused to be written ; and if I should “bring forth the same again, they would publish that “which they had stolen, and Satan would stir up the hearts “of this generation, that they might not receive this work; “but behold the Lord said unto me, I will not suffer that

“Satan shall accomplish his evil design in this thing : “therefore shalt thou translate from the plates of Nephi, “until you come to that which ye have translated, which “ye have retained, and behold ye shall publish it as the “record of Nephi ; and thus I will confound those who “have altered my words.”

The facts respecting the lost manuscript, we have not been able to ascertain. They sometimes charged the wife of Harris with having burnt it ; but this is denied by her. They were, however, taken from the possession of Harris, by a miracle wrought by Satan. The prophet has undertaken to inform the reader how the Lord got him out of this dilemma : “thou shalt translate from the plates of Nephi until thou come to that which ye have translated, which ye have retained, and behold ye shall publish it as the record of Nephi.” Here the Lord, in order to counteract the works of the Devil, is represented by Smith as palming off upon the world an acknowledged falsehood,—the records of Lehi must be published as the records of Nephi. Again, how could Smith know when he came to that which he had translated, without looking at the plates, (which he could not read if he did,) for he does not pretend that there was any miracle in this operation. But who, except one fully endued with the folly and wickedness of “the author,” can believe for a moment, that the Lord would make known his will in such language. Again, an important record which had been made by a miracle, [22] kept for ages by a miracle, dug from the ground by a miracle, and translated by a miracle, was stolen by some one, so that even a miracle could not restore it, and thus were the designs of the Lord counteracted by “Satan putting it into their hearts to tempt the Lord.”