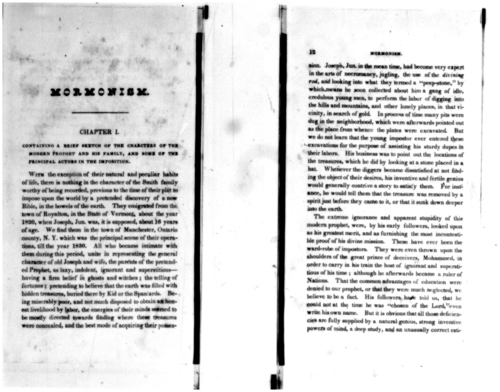 CONTAINING A BRIEF SKETCH OF THE CHARACTERS OF THE MODERN PROPHET AND HIS FAMILY, AND SOME OF THE PRINCIPAL ACTORS IN THE IMPOSITION.

WITH the exception of their natural and peculiar habits of life, there is nothing in the character of the Smith family worthy of being recorded, previous to the time of their plot to impose upon the world by a pretended discovery of a new Bible, in the bowels of the earth. They emigrated from the town of Royalton, in the State of Vermont, about the year 1820, when Joseph, Jun. was, it is supposed, about 16 years of age. We find them in the town of Manchester, Ontario county, N. Y. which was the principal scene of their operations, till the year 1830. All who became intimate with them during this period, unite in representing the general character of old Joseph and wife, the parents of the pretended Prophet, as lazy, indolent, ignorant and superstitious—having a firm belief in ghosts and witches ; the telling of fortunes ; pretending to believe that the earth was filled with hidden treasures, buried there by Kid or the Spaniards.

Being miserably poor, and not much disposed to obtain an honest livelihood by labor, the energies of their minds seemed to be mostly directed towards finding where these treasures were concealed, and the best mode of acquiring their posses- [11] sion. Joseph, Jun. in the mean time, had become very expert in the arts of necromancy, jugling, the use of the divining rod, and looking into what they termed a “peep-stone,” by which means he soon collected about him a gang of idle, credulous young men, to perform the labor of digging into the hills and mountains, and other lonely places, in that vicinity, in search of gold. In process of time many pits were dug in the neighborhood, which were afterwards pointed out as the place from whence the plates were excavated. But we do not learn that the young impostor ever entered these excavations for the purpose of assisting his sturdy dupes in their labors. His business was to point out the locations of the treasures, which he did by looking at a stone placed in a hat. Whenever the diggers became dissatisfied at not finding the object of their desires, his inventive and fertile genius would generally contrive a story to satisfy them. For instance, he would tell them that the treasure was removed by a spirit just before they came to it, or that it sunk down deeper into the earth.

The extreme ignorance and apparent stupidity of this modern prophet, were, by his early followers, looked upon as his greatest merit, and as furnishing the most incontestible proof of his divine mission. These have ever been the ward-robe of impostors. They were even thrown upon the shoulders of the great prince of deceivers, Mohammed, in order to carry in his train the host of ignorant and superstitious of his time ; although he afterwards became a ruler of Nations. That the common advantages of education were denied to our prophet, or that they were much neglected, we believe to be a fact. His followers have told us, that he could not at the time he was “chosen of the Lord,” even write his own name. But it is obvious that all those deficiencies are fully supplied by a natural genius, strong inventive powers of mind, a deep study, and an unusually correct esti- [12] mate of the human passions and feelings. In short, he is now endowed with all the requisite traits of character to pursue most successfully the humbug which he has introduced. His address is easy, rather facinating and winning, of a mild and sober deportment, when not irritated. But he frequently becomes boisterous by the impertinence or curiosity of the skeptical, and assumes the bravado, instead of adhering to the meekness which he professes. His followers, of course, can discover in his very countenance all the certain indications of a divine mission.

For further illustrations of the character of the Smith family, the reader is referred to the numerous depositions and certificates attached to this work.

MARTIN HARRIS is the next personage of note in the Golden Bible speculation. He is one of the three witnesses to the truth of the book, having been shown the plates through the agency of an Angel, instead of the Prophet Joseph, who always had them in possession. Before his acquaintance with the Smith family, he was considered an honest, industrious citizen, by his neighbors. His residence was in the town of Palmyra, where he had accumulated a handsome property. He was naturally a very visionary turn of mind on the subject of religion, holding one sentiment but a short time. He engaged in the new Bible business with a view of making a handsome sum of money from the sale of the books, as he was frequently heard to say. The whole expense of publishing an edition of 5000 copies, was borne by Martin, to secure the payment of which, he mortgaged his farm for $3000. Having failed in his anticipations about the sale of the books, (the retail price of which they said was fixed by an Angel at $1 75, but afterwards reduced to $1 25, and from that down to any price they could obtain) he adopted Smith as his Prophet, Priest and King. Since that time, the frequent demands upon Martin’s purse have reduced it to [13] a very low state. He seems to have been the soul and body of the whole imposition, and now carries the most incontestible proofs of a religious maniac. He frequently declares that he has conversed with Jesus Christ, Angels and the Devil. Christ he says is the handsomest man he ever saw ; and the Devil looks very much like a jack-ass, with very short, smooth hair, similar to that of a mouse. He says he wrote a considerable part of the book, as Smith dictated, and at one time the presence of the Lord was so great, that a screen was hung up between him and the Prophet ; at other times the Prophet would sit in a different room, or up stairs, while the Lord was communicating to him the contents of the plates. He does not pretend that he ever saw the wonderful plates but once, although he and Smith were engaged for months in deciphering their contents. He has left his wife to follow the fortunes of Smith. He has frequent fits of prophecying, although they are not held in very high repute among his brethren.

A specimen of his prophetic powers we subjoin. They were written for the special information of a friend of his who placed them upon the wall of his office, and are in these words :

“Within four years from September 1832, there will not “be one wicked person left in the United States ; that the “righteous will be gathered to Zion, [Missouri,] and that “there will be no President over these Unites States after “that time.

“I do hereby assert and declare that in four years from “the date hereof, every sectarian and religious denomination “in the United States, shall be broken down, and every

“Christian shall be gathered unto the Mormonites, and the “rest of the human race shall perish. If these things do not “take place, I will hereby consent to have my hand separa- “ted from my body.

Martin is an exceedingly fast talker. He frequently gathers a crowd around him in bar-rooms and in the streets.—Here he appears to be in his element, answering and explain- [14] ing all manner of dark and abstruse theological questions, from Genesis to Revelations ; declaring that every thing has been revealed to him by the “power of God.” During these flights of fancy, he frequently prophecies of the coming of Christ, the destruction of the world, and the damnation of certain individuals. At one time he declared that Christ would be on earth within fifteen years, and all who did not believe the book of Mormon would be destroyed.

He is the source of much trouble and perplexity to the honest portion of his brethren, and would undoubtedly long since have been cast off by Smith, were it not for his money, and the fact that he is one of the main pillars of the Mormon fabric. Martin is generally believed, by intelligent people, to be laboring under a partial derangement ; and that any respectable jury would receive his testimony, in any case, of ever so trifling a nature, we do not believe ; yet, the subjects of the delusion think him a competent witness to establish miracles of the most unreasonable kind. But we leave him for the present.

OLIVER COWDERY comes next in the catalogue. He was also a chief scribe to the prophet, while transcribing, after Martin had lost 116 pages of the precious document, by interference of the Devil. An Angel also has shown him the plates, from which the book of Mormon proceeded, as he says. He is a blacksmith by trade, and sustained a fair reputation until his intimacy commenced with the money-diggers. He was one of the many in the world who always find time to study out ways and means to live without work. He accordingly quit the blacksmithing business, and is now the editor of a small monthly publication issued under the directions of the prophet, and principally filled with accounts of the spread of Mormonism, their persecutions, and the fabled visions and commands of Smith.

DAVID WHITMAR is the third special witness who signed [15] the certificate with Harris and Cowdery, testifying to having seen plates. He is one of five of the same name and family who have been used as witnesses to establish the imposition, and who are now head men and leaders in the Mormonite camp. They were noted in their neighborhood for credulity and a general belief in witches, and perhaps were fit subjects for the juggling arts of Smith. David relates that he was led by Smith into an open field, on his father’s farm, where they found the Book of plates lying upon the ground. Smith took it up and requested him to examine it, which he did for the space of half an hour or more, when he returned it to Smith, who placed it in its former position, alledging that it was in the custody of an Angel. He describes the plates as being about eight inches square, the leaves being metal of a whitish yellow color, and of the thickness of tin plates. The back was secured with three small rings of the same metal, passing through each leaf in succession ; that the leaves were divided equidistant between the back and the edge, by cutting the plates in two parts, and again united with solder, so that the front might be opened, while the back part remained stationary and immovable, and was consequently a sealed book, which would not be revealed for ages to come, and which Smith himself was not permitted to understand. On opening that part of the book which was not secured by seals, he discovered inscribed on the aforesaid plates, divers and wonderful characters, some large and some small, but beyond the wisdom of man to understand without supernatural aid ; this account is sometimes partly contradicted by Harris.