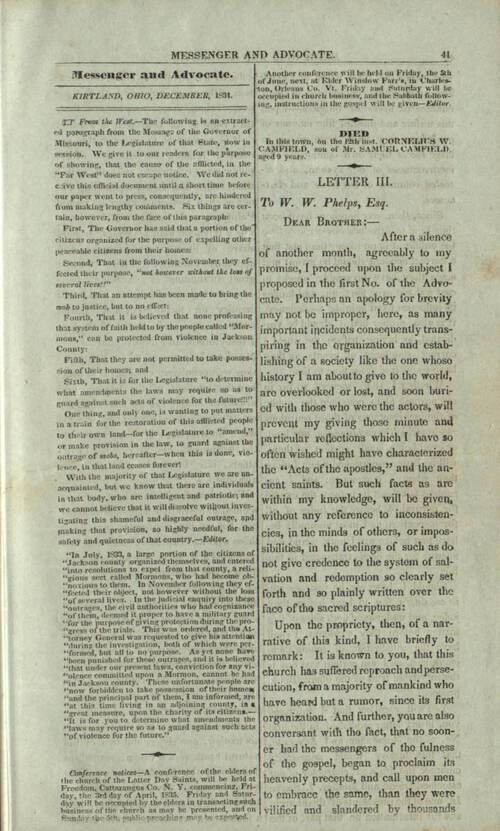 After a silence of another month, agreeable to my promise, I proceed upon the subject I proposed in the first No. of the Advocate. Perhaps an apology for brevity may not be improper, here, as many important incidents consequently transpiring in the organization and establishing of a society like the one whoso history I am about to give to the world, are overlooked or lost, and soon buried with those who were the actors, will prevent my giving those minute and particular reflections which I have so often wished might have characterized the “Acts of the apostles,” and the ancient saints. But such facts as are within my knowledge, will be given, without any reference to inconsistencies, in the minds of others, or impossibilities, in the feelings of such as do not give credence to the system of salvation and redemption so clearly set forth and so plainly written over the face of the sacred scriptures:

Upon the propriety, then, of a narrative of this kind, I have briefly to remark: It is known to you, that this church has suffered reproach and persecution, from a majority of mankind who have heard but a rumor, since its first organization. And further, you are also conversant with the fact, that no sooner had the messengers of the fulness of the gospel, began to proclaim its heavenly precepts, and call upon men to embrace the same, than they were vilified and slandered by thousands who never saw their faces, and much less knew aught derogatory of their characters, moral or religious—Upon this unfair and unsaint like manner of procedure they have been giving in large sheets their own opinions of the incorrectness of our system, and attested volumes of our lives and characters.

Since, then, our opposers have been thus kind to introduce our cause before the public, it is no more than just that a correct account should be given; and since they have invariable sought to cast a shade over the truth, and hinder its influence from gaining ascendency, it is also proper that it should be vindicated, by laying before the world a correct statement of events as they have transpired from time to time.

Whether I shall succeed so far in any purpose as to convince the public of the incorrectness of those scurulous reports which have inundated our land, or even but a small portion of them, will be better ascertained when I close than when I commence; and I am content to submit it before the candid for perusal, & before the Judge of all for inspection, as I most assuredly believe that before HIM I must stand and answer for the deeds transacted in this life.

Should I, however, be instrumental in causing a few to hear before they judge, and understand both sides of this matter before they condemn, I shall have the satisfaction of seeing them embrace it, as I am certain that one it the inevitable fruit of the other. But to proceed:

You will recollect that I informed you, in m letter published in the first No. of the Messenger and Advocate, that this history would necessarily embrace the life and character of our esteemed friend and brother, J. SMITH JR. one of the presidents of this church, and for information on that part of the subject, I refer you to his communication of the same, published, in this paper. I shall, therefore, pass over that, till I come to the 15th year of his life.

It is necessary to premise this account by relating the situation of the public mind relative to religion, at this time: One Mr. Lane, a presiding Elder of the Methodist church, visited Palmyra, and vicinity, Elder Lane was a tallented young man possessing a good share of literary endowments, and apparent humility. There was a great awakening, or excitement raised on the subject of religion, and much enquiry for the word of life. Large additions were made to the Methodist, Presbyterian, and Baptist churches,—Mr. Lane’s manner of communication was peculiarly calculated to awaken the intellect of the hearer, and around the sinner to look about him for safety—much good instruction was always drawn from his discourses on the scriptures, and in common with others, our brother’s mind became awakened.

For a length of time the reformation seemed to move in a harmonious manner, but, as the excitement ceased, or those who had expressed anxieties, had professed a belief in the pardoning influence and condescension of the Savior, a general struggle was made by the leading characters of the different sects, for proselytes. Then strife seemed to take the place of that apparent union and harmony which had previously characterized the moves and exhortations of the old professors, and a cry—I am right—you are wrong— was introduced in their stead.

In this general strife for followers, his mother, one sister, and two of his natural brothers, were persuaded to unite with the Presbyterians. This gave opportunity for further reflection; and as will be seen in the sequel, laid a foundation, or was one means of laying a foundation for the attestation of the truths, or professions of truth, contained in that record called the word of God.

After strong solicitations to unite with one of those different societies, and seeing the apparent proselyting disposition manifested with equal warmth from each, his mind was led to more seriously contemplate the importance of a move of this kind. To profess godliness without its benign influence upon the heart, was a thing so foreign from his feelings, that his spirit was not at rest day nor night. To unite with a society professing to be built upon the only sure foundation, and that profession be a vain one, was calculated, in its very nature, the more it was contemplated, the more to arouse the mind to the serious consequences of moving hastily, in a course fraught with eternal realities. To say he was right, and still be wrong, could not profit; and amid so many, some much be built upon the sand.

In this situation where could he go? If he went to one he was told they were right, and all others were wrong—If to another, the same was heard from those: All professed to be the true church; and if not they were certainly hypocritical, because, if I am presented with a system of religion, and enquire of my teacher whether it is correct, and he informs me that he is not certain, he acknowledges at once that he is teaching without authority, and acting without a commission!

If one professed a degree of authority or preference in consequence of age or right, and that superiority was without evidence, it was insufficient to convince a mind once arouse to that degree of determination which at that time operated upon him. And upon farther reflecting, that the Savior had said that the gate was straight and the way narrow that lead to life eternal, and that few entered there; and that the way was broad, and the gate wide which lead to destruction, and that many crowded its current, a proof from some source was wanting to settle the mind and give peace to the agitated bosom. It is not frequent that the minds of men are exercised with proper determination relative to obtaining a certainty of the things of God.—They are too apt to rest short of that assurance which the Lord Jesus has so freely offered in his word to man, and which so beautifully characterizes his whole plan of salvation, as revealed to us.