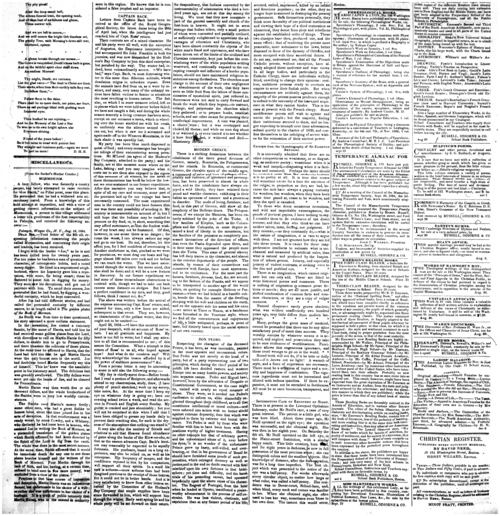 [From the Sacket’s Harbor Courier.]

A lazy fellow, who was formerly a county pauper, has lately attempted to raise recruits for “Joe Smith,” on Pillar point, near this place. He pretended that he had a withered arm miraculously cured. From a knowledge of this bold attempt at imposition, and with a view of getting correct information on the subject of Mormonism, a person in this village addressed a letter to a gentleman of the first respectability in Palmyra, and received the following answer: Palmyra, Wayne co., N. Y., Aug. 16, 1834.

DEAR SIR:—Your letter of the 5th ult. requesting information concerning the people called Mormonites, and concerning their origin and leaders, has been received.

I begin with the leader “Joe,” as he is and has been called here for twenty years past. For ten years he has been a man of questionable character, of intemperate habits, and a noted money digger. He lived in a sequestered neighborhood, where his loquacity gave him a reputation, with some, for being smart; these he flattered to assist him in digging for money. They soon saw his deceptions, and got out of patience with him. To avoid their sneers, Joe pretended that he had found, by digging, a wonderful curiosity, which he kept concealed.

After Joe had told different stories, and had called the pretended curiosity by different names, he at length called it, The Golden Plates of the Book of Mormon.

As Smith was from time to time questioned, his story assumed a more uniform statement.

In the meantime, Joe visited a visionary fanatic, by the name of Harris, and told him he had received some golden plates from the Lord, with directions to call on Martin Harris for fifty dollars, to enable him to go to Pennsylvania, and there translate the contents of those plates. At the same time he affirmed to Harris, that the Lord had told him that he and Martin Harris were the only honest men in the world. Joe had doubtless heard Martin frequently say this of himself.

This he knew was the assailable point in his visionary mind. The delicious bait was greedily swallowed. The fifty dollars were soon put into the hands of Joe, and he cleared for Pennsylvania.

Martin Harris was then worth five or six thousand dollars, and the whole brotherhood of the Smiths were in very low worldly circumstances.

The Smiths used Martain’s money freely; some other men, who had a great dislike to honest labor, about that time joined Joe in his acts of deception. In that reinforcement was a ready writer, by name Cowdry, and a Whitney, who declared he had once been in heaven, who assisted Joe in writing the Book of Mormon, as a pretended translation of the golden plates which Smith affirmed he had been directed by the Spirit of the Lord to dig from the earth. The whole was done in the most secret manner. At the same time, Smith affirmed that it would be immediate death for any one to see those plates besides himself and the writers of the book of Mormon. Poor Martain through his lack of faith, and his having at a certain time refused to hand over to Joe more money, was excluded from a view of the plates.

Previous to that base course of imposition and deception, Martin Harris was an industrious farmer, but unfortunate in his choice for a wife; or rather she was unfortunate in her choice of a husband. It is a truth of public notoriety that Martin Harris, who is the second in authority among the Mormonites, who gives to their preachers license to preach and authority to put their proselytes under water, has lain violent hands on his wife, and so cruelly and frequently whipped and beaten her, that she had to seek refuge from his abuse and cruelty, among her relatives. To this day he is considered, in this section of the country, in domestic matters, a base scoundrel; in religion, a dupe to the Smiths; in all things, an unlearned, conceited hypocrite. He paid for printing five thousand copies of the Book of Mormon, which exhausted all his funds. In Ohio he has attempted to get another wife; some one wrote from Ohio, and ascertained that his long and greatly abused wife is still alive in the vicinity of Palmyra, and thus defeated him in his iniquity.

All the Mormonites have left his part of our State. I know of no one in this section of country who ever gave them credence. Joe Smith dare not come into this region from a fear of his creditors, from whom he absconded to avoid paying their just demands. He has had a stone, into which, when it is placed in a hat, he pretended to look, and to see chests of money buried in the earth. He is a fortune teller, and says he can tell where stolen goods go; probably too well.

Harris prophesied that this village was to have been destroyed by lightning more than two years ago. Some other things, he in like manner said were then to have happened. As his predictions have all failed he is now seldom seen in this region. He knows that he is considered a false prophet and an imposter.