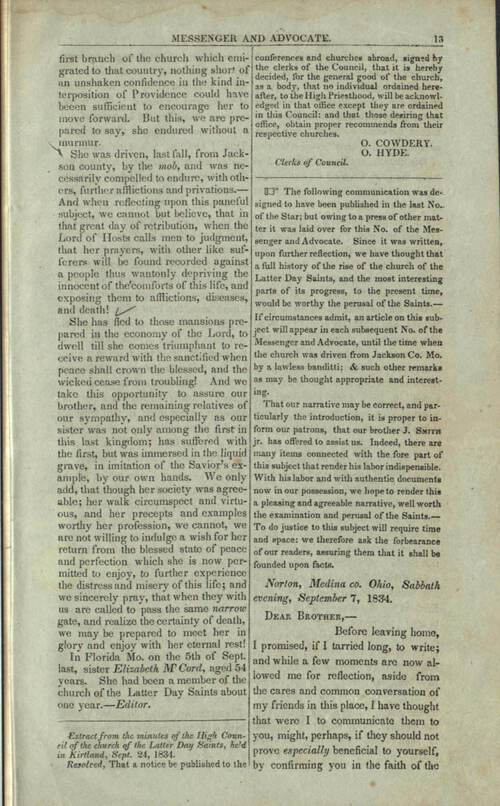 Before leaving home, I promised, if I tarried long, to write; and while a few moments are now allowed me for reflection, aside from the cares and common conversation of my friends in this place, I have thought that were I to communicate them to you, might, perhaps, if they should not prove especially beneficial to yourself, by confirming you in the faith of the [13] gospel, at least be interesting, since it has pleased our heavenly Father to call us both to rejoice in the same hope of eternal life. And by giving them publicity, some thousands who have embraced the same covenant, may learn something more particular upon the rise of this church, in this last time. And while the gray evening is fast changing into a settled darkness, my heart responds with the happy millions who are in the presence of the Lamb, and are past the power of temptation, in rendering thanks, though feebly, to the same Parent.

Another day has passed, into that, to us, boundless ocean, ETERNITY! where nearly six thousand years have gone before; and what flits across the mind like an electric shock is, that it will never return! Whether it has been well improved or not; whether the principles emanating from HIM who “hallowed” it, have been observed; or whether, like the common mass of time, it has been heedlessly spent, is not for me to say—one thing I can say—It can never be recalled!— it has rolled in to assist in filling up the grand space decreed in the mind of its Author, till nature shall have ceased her work, and time its accustomed revolutions—when its Lord shall have completed the gathering of his elect, and with them enjoy that Sabbath which shall never end!

On Friday, the 5th, in company with our brother JOSEPH SMITH jr. I left Kirtland for this place (New Portage,) to attend the conference previously appointed. To be permitted, once more, to travel with this brother, occasions reflections of no ordinary kind. Many have been the fateagues and privations which have fallen to my lot to endure, for the gospel’s sake, since 1828, with this brother. Our road has frequently been spread with the “fowler’s snare,” and our persons sought with the eagerness, of the Savage’s ferocity, for innocent blood, by men, either heated to desperation by the insinuations of those who professed to be “guides and way-marks” to the kingdom of glory, or the individuals themselves!—This, I confess, is a dark picture to spread before our patrons, but they will pardon my plainness when I assure them of the truth. In fact, God has so ordered, that the reflections which I am permitted to cast upon my past life, relative to a knowledge of the way of salvation, are rendered “doubly endearing.” Not only have I been graciously preserved from wicked and unreasonable men, with this our brother, but I have seen the fruit of perseverance in proclaiming the everlasting gospel, immediately after it was declared to the world in these last days, in a manner not to be forgotten while heaven gives my common intellect. And what serves to render the reflection past expression on this point is, that from his hand I received baptism, by the direction of the angel of God—the first received into this church, in this day.

Near the time of the setting of the Sun, Sabbath evening, April 5th, 1829, my natural eyes, for the first time beheld this brother. He then resided in Harmony, Susquehanna county Penn. On Monday the 6th, I assisted him in arranging some business of a temporal nature, and on Tuesday the 7th, commenced to write the book of Mormon. These were days never to be forgotten—to sit under the sound of a voice dictated by the inspiration of heaven, awakened the utmost gratitude of this bosom! Day after day I continued, uninterrupted, to write from his mouth, as he translated, with the Urim and Thummim, or, as the Nephites whould have said, “Interpreters,” the history, or record, called “The book of Mormon.” [14]

To notice, in even few words, the interesting account given by Mormon, and his faithful son Moroni, of a people once beloved and favored of heaven, would supersede my present design: I shall therefore defer this to a future period, and as I said in the introduction, pass more directly to some few incidents immediately connected with the rise of this church, which may be entertaining to some thousands who have stepped forward, amid the frowns of bigots and the calumny of hypocrites, and embraced the gospel of Christ.

No men in their sober senses, could translate and write the directions given to the Nephites, from the mouth of the Savior, of the precise manner in which men should build up his church, and especially, when corruption had spread an uncertainty over all forms and systems practiced among men, without desiring a privilege of showing the willingness of the heart by being buried in the liquid grave, to answer a “good conscience by the resurrection of Jesus Christ.”

After writing the account given of the Savior’s ministry to the remnant of the seed of Jacob, upon this continent, it was easily to be seen, as the prophet said would be, that darkness covered the earth and gross darkness the minds of the people. On reflecting further, it was as easily to be seen, that amid the great strife and noise concerning religion, none had authority from God to administer the ordinances of the gospel. For, the qestion might be asked, have men authority to administer in the name of Christ, who deny revelations? when his testimony is no less than the spirit of prophecy? and his religion based, built, and sustained by immediate revelations in all ages of the world, when he has had a people on earth? If these facts were buried, and carefully concealed by men whose craft would have been in danger, if once permitted to shine in the faces of men, they were no longer to us; and we only waited for the commandment to be given, “Arise and be baptized.”

This was not long desired before it was realized. The Lord, who is rich in mercy, and ever willing to answer the consistent prayer of the humble, after we had called upon him in a fervent manner, aside from the abodes of men, condescended to manifest to us his will. On a sudden, as from the midst of eternity, the voice of the Redeemer spake peace to us, while the vail was parted and the angel of God came down clothed with glory, and delivered the anxiously looked for message, and the keys of the gospel of repentance!—What joy! what wonder! what amazement!

While the world were racked and distracted—while millions were grouping as the blind for the wall, and while all men were resting upon uncertainty, as a general mass, our eyes beheld—our ears heard. As in the “blaze of day;” yes, more—above the glitter of the May Sun beam, which then shed its brilliancy over the face of nature! Then his voice,though mild, pierced to the center, and his words, “I am thy fellow-servant,” dispelled every fear. We listened—we gazed—we admired! ’Twas the voice of the angel from glory–’twas a message from the Most High! and as we heard we rejoiced, while his love enkindled upon our souls, and we were rapt in the vision of the Almighty! Where was room for doubt? No where: uncertainty had fled, doubt had sunk, no more to rise, while fiction and deception had fled forever!

But, dear brother think, further think for a moment, what joy filled our hearts and with what surprise we must have bowed, (for who would not have bowed [15] the knee for such a blessing?) when we received under his hand the holy priesthood, as he said, “upon you my fellow servants, in the name of Messiah I confer this priesthood and this authority, which shall remain upon earth, that the sons of Levi may yet offer an offering unto the Lord in righteousness!”

I shall not attempt to paint to you the feelings of this heart, nor the majestic beauty and glory which surrounded us on this occasion; but you will believe me when I say, that earth, nor men, with the eloquence of time, cannot begin to clothe language in as interesting and sublime a manner as this holy personage. No; nor has this earth power to give the joy, to bestow the peace, or comprehend the wisdom which was contained in each sentence as they were delivered by the power of the Holy Spirit! Man may deceive his fellow man; deception may follow deception, and the children of the wicked one may have power to seduce the foolish and untaught, till nought but fiction feeds the many, and the fruit of falsehood carries in its current the giddy to the grave; but one touch with the finger of his love, yes, one ray of glory from the upper world, or one word from the mouth of the Savior, from the bosom of eternity, strikes it all into insignificance, and blots it forever from the mind! The assurance that we were in the presence of an angel; the certainty that we heard the voice of Jesus, and the truth unsullied as it flowed from a pure personage, dictated by the will of God, is to me, past description, and I shall ever look upon this expression of the Savior’s goodness with wonder and thanksgiving while I am permitted to tarry, and in those mansions where perfection dwells and sin never comes, I hope to adore in that DAY which shall never cease!*

To-day the church in this place assembled, and were addressed on the great and important subject of salvation by brother JARED CARTER, followed by brother SIDNEY RIGDON. The cheering truths ably and eloquently advanced by these brethren were like “apples of gold in baskets of silver.”—The saints listened with attention, after which bread was broken, and we offered another memorial to our Lord that we remembered him.

I must close for the present: my candle is quite extinguished, and all nature seems locked in silence, shrouded in darkness, and enjoying that repose so necessary to this life. But the period is rolling on when night will close, and those who are found worthy will inherit that city where neither the light of the sun nor moon will be necessary! “for the glory of God will lighten it, and the Lamb will be the light thereof.”

P. S. I shall write you again on the subject of Conference. O. C.

* I will hereafter give you a full history of the rise of this church, up to the times stated in my introductions; which will necessarily embrace the life and character of this brother. I shall therefore leave the history of baptism, &c. till its proper place.