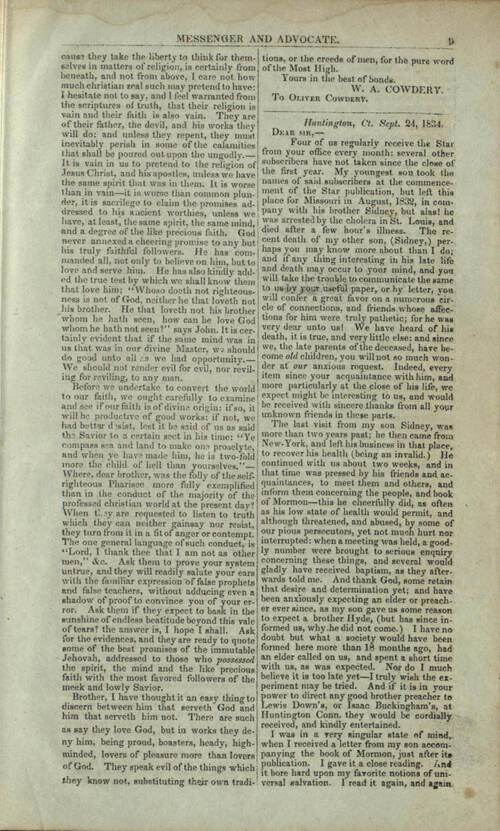 Four of us regularly receive the Star from your office every month: several other subscribers have not taken since the close of the first year. My youngest son took the names of said subscribers at the commencement of the Star publication, but left this place for Missouri in August, 1832, in company with his brother Sidney, but alas! he was arrested by the cholera in St. Louis, and died after a few hour’s illness. The recent death of my other son, (Sidney,) perhaps you may know more about than I do; and if any thing interesting in his late life and death may occur to your mind, and you will take the trouble to communicate the same to us by your useful paper, or by letter, you will confer a great favor on a numerous circle of connections, and friends whose affections for him were truly pathetic; for he was very dear unto us! We have heard of his death, it is true, and very little else: and since we, the late parents of the deceased, have become old children, you will not so much wonder at our anxious request. Indeed, every item since your acquaintance with him, and more particularly at the close of his life, we expect might be interesting to us, and would be received with sincere thanks from all your unknown friends in these parts.

The last visit from my son Sidney, was more than two years past; he then came from New-York, and left his business in that place, to recover his health (being an invalid.) He continued with us about two weeks, and in that time was pressed by his friends and acquaintances, to meet them and others, and inform them concerning the people, and book of Mormon—this he cheerfully did, as often as his low state of health would permit, and although threatened, and abused, by some of our pious persecutors, yet not much hurt nor interrupted: when a meeting was held, a goodly number were brought to serious enquiry concerning these things, and several would gladly have received baptism, as they afterwards told me. And thank God, some retain that desire and determination yet; and have been anxiously expecting an elder or preacher ever since, as my son gave us some reasons to expect a brother Hyde, (but has since informed us, why he did not come.) I have no doubt but what a society would have been formed here more than 18 months ago, had an elder called on us, and spent a short time with us, as was expected. Nor do I much believe that it is too late yet—I truly wish the experiment may be tried.

And if it is in your power to direct any good brother preacher to Lewis Down’s, or Isaac Buckingham’s, at Huntington Conn. they would be cordially received, and kindly entertained.

I was in a very singular state of mind, when I received a letter from my son accompanying the book of Mormon, just after its publication. I gave it a close reading. And it bore hard upon my favorite notions of universal salvation. I read it again, and again [10] with close attention and prayer, I examined the proof: the witnesses, and all other testimony, and compared it with that of the bible, (which book I verily thought I believed,) and found the two books mutually and reciprocally corroborate each other; and if I let go the book of Mormon, the bible might also go down by the same rule.

If Moses and the prophets, Christ and his apostles, were the real authors of the bible, chiefly revealed and written on the continent of Asia, was not the book of Mormon also written by men who were divinely inspired by the Holy Spirit, on the continent of America? And did not Jesus Christ as truly appear on the continent of America, after his resurrection, and chose twelve apostles to preach his gospel; and did he not deliver his holy doctrine, and teach the same to numerous multitudes on this American continent? I say, did he not as truly do these things here, after his resurrection, as he did the same in Jerusalem before his resurrection? My heart and soul replies yes: the proof is full and clear, and has recently been confirmed by angels from heaven, and what need have we of any further witnesses? No sir, I am well persuaded of the truth of that holy book.—I am an old man, almost 73; have read much in my day. My reading is now confined chiefly to the bible; the book of Mormon, and your papers, (or the Star.) I used to have letters often from my son; but his sudden death has deprived me of all hope from that source, the loss of which communication we greatly lament.

I know not that we shall ever hear any of the Mormon preachers but we really hope to: I have lately heard of a small society in Salisbury in this State: which is the only place where they have preached in Connecticut, I believe, about 70 miles from this place.

I do believe, if truth should prevail among us, concerning this people, and the book of Mormon, that the prejudice against our doctrine and discipline must give way; but while one “black coat” cries delusion, another says it’s all the work of the devil, and a third cries blasphemy, and enthusiasm; and their people all settled on their lees, and well convinced of the correctness of their own views, viz: mungrel calvinism, and crippled arminianisms and several others isms, and they all very piously groan out! “O we quite pitty that poor persecuted people, the Mormons, but they are a deceived people: and while God, man and the devil, seem to be engaged against them, who dare be for them with any hope of success? O no, they must come down,” &c. But notwithstanding all this apathy, while murder, robbery, blood and awful persecution, stalks through our land with such horrid front, still I believe all is not yet lost; no, I hear of the real success of some of our preachers in the Lord’s vineyard, and I truly hope and pray, that some of our good “Mormon” preachers may soon visit this town; yes, and every other place, till Christ’s church shall become the joy of the whole earth,” and the whole globe “covered with the knowledge of the Lord, even as the waters cover the sea.”

We have two very pious priests in this small village; (or at least so called;) one of whom has been dismissed from his sacred charge, but once: the other we expect will be cashiered the third time in a few days from his beloved flock. These holy ministers are receiving but about ten or eleven hundred dollars per annum from all their hard services: viz reading one, and some times two sermons per week; which they made themselves, (they say.) and perhaps read the same to their first congregation years ago—and what then? are they not as good now as ever? yes, age is honorable, and they read them the better I think: and this is all the temporal reward these hard laborers get, except their wood, marriage bills, fresh bits, and other presents, which may amount to one or two hundred more, perhaps! Yes, these few good things and the “praise of men” is all these faithful stewards get per year for their hard labor in this small pious village, while some of their pious communicants, with our other town paupers, are fed and clothed at the enormous sum of 54 cents per week, which was the auction price of those who bid them off. I must confess for one, I had much rather pitty, than persecute such poor ministers.

P. S. Dear sir, should you favor us with a letter, please to direct to Eli Gilbert, Huntington, Fairfield co. Conn. And again, some of our neighbors, who read your paper with us, ask why so many revelations in the papers of your predecessor, Mr. Phelps, and none in yours? but I cannot tell them, and you are not obliged to inform us, and there the query rests.

We hear very little from the prophet lately. Three times our false papers have told us he was dead, and once mortally wounded in battle. This was his third death. The last news of him, stated that he was fleeing from the west, and declaring he was unable to raise the dead, or cure the cholera. Of course, his followers begin to fear that he may be liable to mortality. Such stuff has been filling the papers of the day for a long time.

No religion passes here, but that which is popular; and the most stilish gets the most proselytes. Excuse errors: I am old, and have written as matter came into mind, at several times.