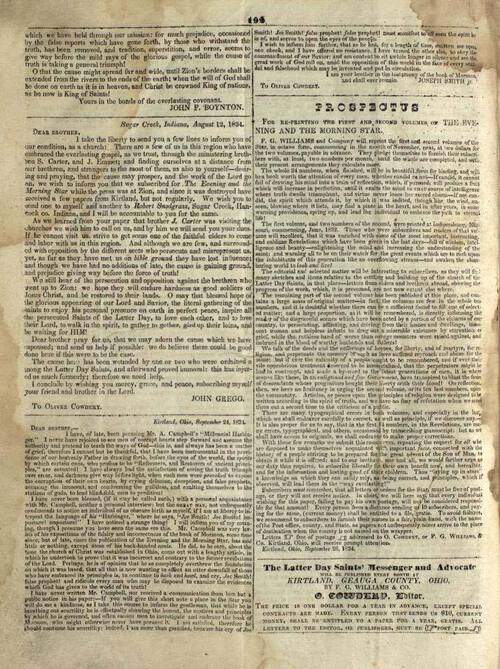 I have, of late, been perusing Mr. A. Campbell’s “Millennial Harbinger.” I never have rejoiced to see men of corrupt hearts step forward and assume the authority and pretend to teach the ways of God—this is, and always has been a matter of grief; therefore I cannot but be thankful, that I have been instrumental in the providence of our heavenly Father in drawing forth, before the eyes of the world, the spirits by which certain ones, who profess to be “Reformers, and Restorers of ancient principles,” are actuated! I have always had the satisfaction of seeing the truth triumph over error, and darkness give way before light, when such men were provoked to expose the corruption of their own hearts, by crying delusion, deception, and false prophets, accusing the innocent, and condemning the guiltless, and exalting themselves to the stations of gods, to lead blind-fold, men to perdition!

I have never been blessed (if it may be called such,) with a personal acqaintance with Mr.Campbell, neither a personal interview: but the GREAT MAN, not unfrequently condescends to notice an individual of as obscure birth as myself, if I am at liberty to interpret the language of his “Harbinger,” where he says, “Joe Smith! Joe Smith! imposture! imposture!” I have noticed a strange thing! I will inform you of my meaning, though I presume you have seen the same ere this. Mr. Campbell was very lavish in his expositions of the falsity and incorrectness of the book of Mormon, some time since, but of late, since the publication of the Evening and Morning Star, has said little or nothing, except some of his back-handed cants. He did, to be sure, about the time the church of Christ was established in Ohio, come out with a lengthy article, in which he undertook to prove that it was incorrect and contrary to the former revelations of the Lord.

Perhaps, he is of opinion that he so completely overthrew the foundation on which it was based, that all that is now wanting to effect an utter downfall of those who have embraced its principles is, to continue to bark and howl, and cry, Joe Smith! false prophet! and ridicule every man who may be disposed to examine the evidences which God has given to the world of its truth!

I have never written Mr. Campbell, nor received a communication from him but a public notice in his paper:—If you will give this short note a place in the Star you will do me a kindness, as I take this course to inform the gentleman, that while he is breathing out scurrility he is effectually showing the honest, the motives and principles by which he is governed, and often causes men to investigate, and embrace the book of Mormon, who might otherwise never have perused it. I am satisfied, therefore he should continue his scurrility; indeed, I am more than gratified, because his cry of Joe Smith! Joe Smith! false prophet! false prophet! must manifest to all men the spirit be is of, and serves to open the eyes of the people.

I wish to inform him further, that as he has, for a length of time, smitten me upon one cheek, and I have offered no resistance, I have turned the other also, to obey the commandment of our Savior; and am content to sit awhile longer in silence and see the great work of God roll on, amid the opposition of this world in the face of every scandal and falsehood which may be invented and put in circulation.

I am your brother in the testimony of the book of Mormon, and shall ever remain.