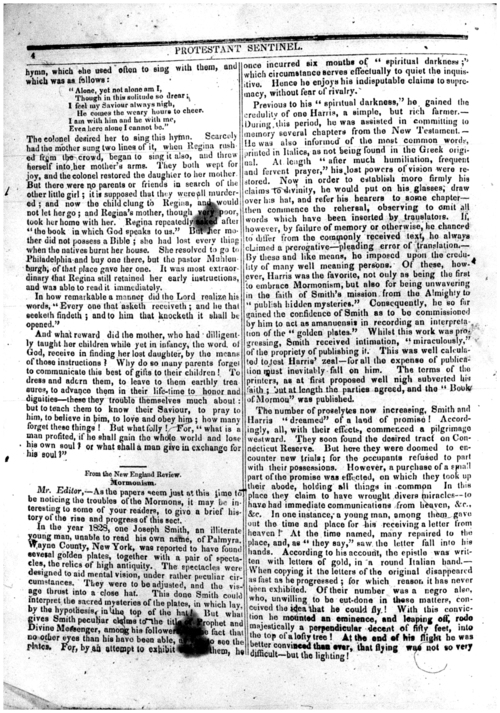 From the New England Review.

Mr. Editor,—As the papers seem just at this time to be noticing the troubles of the Mormons, it may be interesting to some of your readers, to give a brief history of the rise and progress of this sect.

In the year 1828, one Joseph Smith, an illiterate young man, unable to read his own name, of Palmyra, Wayne County, New York, was reported to have found several golden plates, together with a pair of spectacles, relics of high antiquity. The spectacles were designed to aid mental vision, under rather peculiar circumstances. They were to be adjusted, and the visage thrust into a close hat. This done Smith could interpret the sacred mysteries of the plates, in which lay, by the hypothesis, in the top of the hat! But what gives Smith peculiar claims to the title of Prophet and Divine Messenger, among his followers, is the fact that no other eyes than his have been able, as yet, to see the plates. For, by an attempt to exhibit one of them, he once incurred six months of “spiritual darkness;” which circumstance serves effectually to quiet the inquisitive. Hence he enjoys his indisputable claims to supremacy, without fear of rivalry.

Previous to his “spiritual darkness,” he gained the credulity of one Harris, a simple, but rich farmer.—During this period, he was assisted in committing to memory several chapters from the New Testament.—He was also informed of the most common words, printed in italics, as not being found in the Greek original. At length “after much humiliation, frequent and fervent prayer,” his lost powers of vision were restored. Now in order to establish more firmly his claims to divinity, he would put on his glasses, draw over his hat, and refer his hearers to some chapter—then commence the rehersal, observing to omit all words which have been inserted by translators. If, however, by failure of memory or otherwise, he chanced to differ from the commonly received text, he always claimed a prerogative—pleading error of translation.—By these and like means, he imposed upon the credulity of many well meaning persons. Of these, however, Harris was the favorite, not only as being the first to embrace Mormonism, but also for being unwavering in the faith of Smith’s mission from the Almighty to “publish hidden mysteries.” Consequently, he so far gained the confidence of Smith as to be commissioned by him to act as amanuensis in recording an interpretation of the “golden plates.” Whilst this work was progressing, Smith received intimation, “miraculously,” of the propriety of publishing it.

This was well calculated to test Harris’ zeal—for all the expense of publication must inevitably fall on him. The terms of the printers, as at first proposed well nigh subverted his faith; but at length the parties agreed, and the “Book of Mormon” was published.

The number of proselytes now increasing, Smith and Harris “dreamed” of a land of promise! Accordingly, all, with their effects, commenced a pilgrimage westward. They soon found the desired tract on Connecticut Reserve. But here they were doomed to encounter new trials; for the occupants refused to part with their possessions. However, a purchase of a small part of the promise was effected, on which they took up their abode, holding all things in common. In this place they claim to have wrought divers miracles—to have had immediate communications from heaven, &c., &c. In one instance, a young man, among them gave out the time and place for his receiving a letter from heaven! At the time named, many repaired to the place, and, as “they say,” saw the letter fall into his hands. According to his account, the epistle was written with letters of gold, in a round Indian hand.—When copying it the letters of the original disappeared as fast as he progressed; for which reason it has never been exhibited. Of their number was a negro also, who, unwilling to be eut-done in these matters, conceived the idea that he could fly! With this conviction he mounted an eminence, and leaping off, rode majestically a perpendicular decent of fifty feet, into the top of a lofty tree! At the end of his flight he was better convinced than ever, that flying was not so very difficult—but the lighting!

All things here not exactly meeting their wishes, Smith and Harris came to the sage conclusion that the “bona fide” land of promise was still further west.—Under this impression the Mormonites sold their possessions at great sacrifices, and again took up their march to their promised inheritance which they subsequently supposed they had found at “Mount Zion,” Jackson County Missouri. In going there they pursued different routes, and generally went but two together.

Immediately after abandoning the idea of remaining in Ohio, Harris professed to have seen both Jesus Christ and Satan. The former as he describes him, is the handsomest man he ever saw, but Satan is a four-legged, sleek haired being with the head of a Jack ass.

The creed of the Mormonites is not unlike that of the Mahometan; substituting Smith for Mahomet; i. e. God is great and Smith is his Prophet. Their “Book of Revelations” abounds with positive contradictions in single chapters.

Although this sect took rise in New York, and all their movements as a body have been westward, New England has not escaped its baneful influence. In 1831, (I think) one Davidson, a professed disciple of Dilks appeared in the vicinity of Burlington, Vermont; wearing his hair long and pretending sanctity. Upon his authority, Dilks professes not only almighty power, but to be God himself. Jesus Christ is a woman, and much inferior to Dilks.

The Millenium was to have been consummated in 1833; at which time Dilks was to assemble all his followers at Philadelphia. This done all others were to be swept from the globe, and their possessions left in the enjoyment of the Mormonites. Notwithstanding the absurdity of Davidson’s doctrines, he made many proselytes, of whom some were persons of considerable respectability.

The subjects of this fanaticism are represented as having conducted themselves in a manner particularly disgraceful and indecorous. Who Dilks is, I have never learned; but the continually occurring contradictions in every thing pertaining to Mormonism, favor the idea that it is but another name applied to Smith. It is indeed a matter of mute astonishment, that any body can be found, among civilized men, so credulous as to embrace such prima facia absurdities. Yet our much boasted of, enlightened New England has furnished at least her ratable quota of dupes in this case.