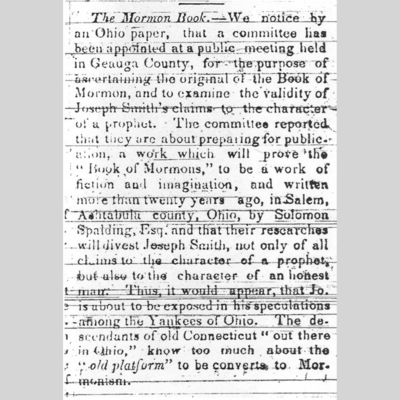 The Mormon Book.—We notice by an Ohio paper, that a committee has been appointed at a public meeting held in Geauga County, for the purpose of ascertaining the original of the Book of Mormon, and to examine the validity of Joseph Smith’s claims to the character of a prophet. The committee reported that they are about preparing for publication, a work which will prove the “Book of Mormons,” to be a work of fiction and imagination, and written more than twenty years ago, in Salem, Ashtabula county, Ohio, by Solomon Spalding, Esq. and that their researches will divest Joseph Smith, not only of all claims to the character of a prophet, but also to the character of an honest man. Thus, it would appear, that Jo. is about to be exposed in his speculations among the Yankees of Ohio. The descendants of old Connecticut “out there in Ohio,” know too much about the “old platform” to be converts to Mormonism.