“The following is taken from” 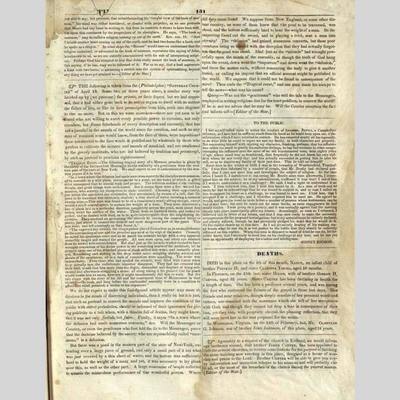 THE following is taken from the ( Philadelphia) “SATURDAY COURIER” of April 19.

Some two or three years since, a similar story was hatched up by (we presume) the priests or their dupes: but we had supposed, that it had either gone back to its native region to dwell with its author the father of lies, or like its first promulgator from him, sunk into disgrace to rise no more. But in this we were mistaken—there are yet men to be found who are willing to exert every possible power to circulate, not only circulate, but frame falsehoods of every description and enormity, that has not a parallel in the annals of the world since the creation, and such as any man of common sense would know, from the face of them, were impositions; these are carried to the four winds & peddled out by wholesale by those who profess to cultivate the science and moral of mankind, and are swallowed by the greedy multitude, who are led haltered by tradition and priestcraft, by such as pretend to proclaim righteousness!

“TRAGICAL EVENT.—The following tragical story of a Mormon preacher is given by the editor of the Independent Messenger on the authority of a gentleman from the western part of the state of New York. We shall expect to see it authenticated by the western papers if it be true.”

“In a town where the delusion had made numerous converts the disciples were summoned to assemble in a wild place, circumjacent to a pond, on the water of which, a gifted elder announced that he should walk and preach. The believers notified their doubting friends, and great things were anticipated.

But it seems there were a few wicked Lamanites, who secretly set themselves to make mischief. Choosing their opportunity, just before the appointed day of miracles, they ascertained, by means of a raft, that the pond to be traversed was extremely shallow; a thin sheet of water covering a common swamp mire.—

This mire was found to be of a consistency nearly strong enough, except within a small central space, to sustain the weight of a man. They soon discovered a line of plank laid in a particular direction completely across the pond, sunk about four inches under the surface of the water. These were so fastened down, and locked together, and so daubed with mud, as to be quite imperceptible from the neighboring declivities.

They resolved on preventing the miracle by sawing the concealed bridge in pieces, just where it crossed the deepest and most dangerous part of the pond. This was done, and left seemingly as they found it.”

“The expected day arrived, the congregation placed themselves as in an amphitheatre on the surrounding slopes and the preacher appeared at the edge of the water. Presently he raised his stentorian voice and as he paced his invisible bridge with a step apparent unearthly taught and warned the people.

All ears were open, and every eye strained from its socket with astonishment. But alas! just as the miracle-worker seemed to have wrought conviction of his divine power in the wondering hearts of the multitude, lo! he stepped upon one of the detached pieces of plank sallied side-ways, and instantly plunged, floundering and sinking in the deep water mire mingling shrieks, screams and shouts of the spectators, all in a rush of commotion were appalling. The scene was indescribable. Even those who had spoiled the miracle, were filled with horror when they actually saw the unfortunate impostor disappear.

They had not dreamed that their trick would cost him more than the fright, discomfort and disgrace of being submerged and afterwards struggling a shore: all along taking it for granted that his plank would enable him to swim, however it might treacherously fail him to walk. But the tale closes with the close of his life and the consequent close of Mormonism in that vicinity.—He sunk, and long before the confounded assembly were in a condition to afford him relief, perished, a victim to his imposture.”

We do not expect to make this fool-figured article appear any more ridiculous in the minds of discerning individuals, than it really is; but it is just, that such as pretend to correct the morals and improve the condition of the public with stated periodicals, should be informed of their ignorance for giving publicity to a tale when, with a thimble full of brains, they might know, that it was not only foolish, but false. Firstly, it says, “In a town where the delusion had made numerous converts,” &c. Will the Messenger or Courier, or even the gentleman who first told the lie to the Messenger, prove that the doctrine believed by the society who are reproachfully called “Mormons,” is a delusion.

But there was a pond in the western part of the state of New-York, extending over a large piece of ground, and only a small part of it but what was just covered by a thin sheet of water, and the bottom was sufficiently hard to hold the weight of a man; and yet, it was necessary to lay plank over this, as well as the other part. A large concourse of people collected to witness the miraculous performance of this wonderful person. Where did they come from? We suppose from New England, or some other distant country, as none of them knew that the pond to be traversed, was shoal, and the bottom sufficiently hard to bear the weight of a man. So the suspecting found out the secret, and in playing a trick, sent a man into eternity! The “delusion” had gained numerous converts, but these poor creatures being so blinded with the deception that they had actually forgotten that the pond was shoal. Alas! just as the “miracle” had wrought powerfully upon the minds of the assembly, as though the truth of God hung upon the event, down went the “imposture” and down went the “delusion,” and there the matter ends, without recovering the body to give it another burial, or calling an inquest that an official account might be published to the world. We suppose that it could not be found in consequence of the mire! Thus ends the “Tragical event,” and one man made his escape to tell the news—what was his name?

Query:—Was not the “gentleman” who told the tale to the Messenger, employed in writing religious lies for the tract peddlers, to convert the world? If he is not we advise that he may be. Will the Courier ascertain the fact and inform us?—[ Editor of the Star.]