The Evening and the Morning Star Editor of the Star 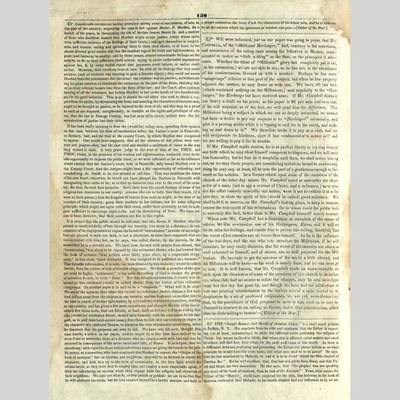 Considerable excitement having prevailed among some of our citizens, of late, in this part of the country, respecting the case in law against Doctor. P. Hurlbut, for a breach of the peace, in threatening the life of brother JOSEPH SMITH JR. and a number of those who doubtless desired that Hurlbut might escape justice, (some whose oaths were sufficient evidence of the feelings of their hearts,) indulged themselves in conjectures, and rumors, raising and spreading them to their own shame, or at least, to the shame of every good citizen who has the smallest regard for truth and righteousness, or peace and harmony in society; and by these means, created considerable feelings on the subject, as far as their influence could extend; trying to excite unfavorable impressions against bro. S. by every foolish report that ignorance could believe, or malice could invent. However, their exertions were in vain; for with all the feelings that they could awaken, (and no exertion was wanting to gain a favorite object,) they could not screan Hurlbut from the punishment due his crime: the evidence was so positive, notwithstanding the great exertion to invalidate the testimony on the part of the State, that they failed in every attempt to save him from the force of the law; and the Court, after a patient hearing of all the witnesses, has holden Hurlbut to bail under bonds of two hundred dollars for his good behavior. This is as it should be—all idlers who seek to obtain a support from the public, by threatening the lives, and assailing the characters of innocent men, ought to be brought to justice, or be exposed to the view of all, and this may be a proof to such as are disposed, unrighteously, to trample on the rights and privileges of others, that the law in Geauga County, has lost none of its nerves, neither have the Administrators of justice lost their virtue.

It has been really amusing to hear the (would be) ruling ones, spending their opinion on this case, between the time of examination before the Justice’s court in Painsville, in January, last, and the trial at the county Court, to which Hurlbut was recognized to appear. One would have supposed, that all the abetters of this fellow were lawyers and judges—they had the case tried and decided a multitude of times in the way they wished it to be. A very grave judge to the west of this, of the THEE, and THOU, Order, in the greatness of his wisdom and righteousness, embraced every favorable opportunity to impress the public mind, as we were informed as far as his influence would extend, that the Justice’s court, held in Painsville, only bound Hurlbut over to the County Court, that the lawyers might have a fair opportunity of ridiculing, and scandalizing, Jo. Smith, as he was pleased to call him. This was doubtless the desire of his own heart, otherwise, he would not have charged the Justices in Painsville with disregarding their oaths so far, as to bind an innocent man over to the court of his country, for trial, for such base purposes. Such have been the moral feelings of some of the religious law characters in our country: persons who are so holy, that they would, (if it were in their power,) lock the kingdom of heaven from such as might, in the time of an invasion of their country, grasp their muskets in her defense, but for some religious principle, which might not agree with their creed, suffer their animosity to rise a degree sufficient to encourage night-mobs, and the threatening of lives. We have reason to hope, however, that their numbers are few in this region.

It is proper that the public should be informed, that this Doctor P. Hurlbut, who has gained so much celebrity of late through our country, (we mean at a distance,) in consequence of his engagements to expose the secrets of “mormonism,” as some of our neighbors are pleased to style our faith, is not a physician, as some have supposed who are unacquainted with him; but, as he says, was called Doctor, by his parents, for the reasonthat he is a seventh son. We have been favored with notices from abroad, that “mormonism,” was about to be exposed by this celebrated Doctor, who had learned that the book of mormon “was written some thirty years since, by a respectable clergyman,” in this state, “now deceased. It was designed to be published as a romance.” This valuable information, it is said, has been obtained by this eminent (would be called) Doctor, from the widow of this celebrated clergyman. We think a preacher of the gospel must be highly “celebrated,” to lay aside the calling of God to declare the gospel of salvation to men, to write “Tales.” But this valuable information, it is said, was obtained by this celebrated (would be called) Doctor, from the widow of this celebrated clergyman. In another paper it is said to be a “rhapsody.” What will it be next? We are of the opinion, that when this (would be) celebrated committee, residing in our country, and has given a few more expositions, and changed the title of his discoveries a few times more, that our friends, at least, such as will see, will be as willing that this (would be) celebrated Doctor, should labor honestly with his own hands for his support, as to gull their hard earned money from them to ride over our country in stages in the character of a celebrated Doctor, to threaten the lives of peaceable inhabitants, when he discovers that his purposes are sure to fail. We have not, till now, thought this man worthy a notice in our paper, neither would he at this time been noticed by us were it not to undeceive those at a distance who are unacquainted with him and may be deceived in consequence of the above mentioned title, of Doctor. It is but just, that we should say, with regard to those individuals whose names are going the rounds in the public prints, as a committee, who have employed this Hurlbut to expose, the “Origin of the book of mormon,” that as citizens, and neighbors, they will be as forward to expose his character, and hold him up to the view of community, in the true light which his crimes merit, as they were first to employ him, and employ a more respectable agent, if they are calculating on success when they engage with the religion and characters of their neighbors. We care not what he, or they preach or publish: we are in no fear that he will overturn the truth: but let him conduct himself in a lawful manner, and hold in a proper estimation the lives, if not the characters of his fellowmen, and he is welcome to all the success which his ignorance or wisdom can gain.—[ Editor of the Star.]