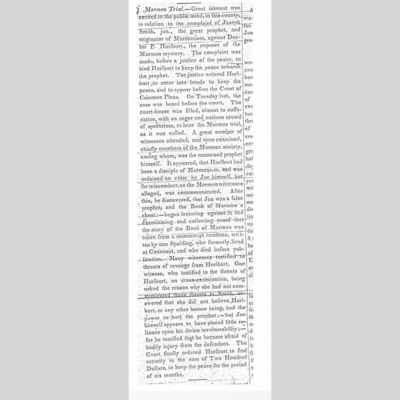 Mormon Trial.—Great interest was excited in the public mind, in this county, in relation to the complaint of Joseph Smith, jun., the great prophet, and originator of Mormonism, against Doctor P. Hurlburt., the exposer of the Mormon mystery. The complaint was made, before a justice of the peace, to bind Hurlburt to keep the peace towards the prophet. The justice ordered Hurlburt to enter into bonds to keep the peace, and to appear before the Court of Common Pleas.

On Tuesday last, the case was heard before the court. The court-house was filled, almost to suffocation, with an eager and curious crowd of spectators, to hear the Mormon trial, as it was called. A great number of witnesses attended, and were examined, chiefly members of the Mormon society, among whom, was the renowned prophet himself. It appeared, that Hurlburt had been a disciple of Mormonism, and was ordained an elder by Joe himself, but for misconduct, as the Mormon witnesses alleged, was excommunicated. After this, he discovered, that Joe was a false prophet, and the Book of Mormon a cheat:—began lecturing against it, and examining and collecting proof that the story of the Book of Mormon was taken from a manuscript romance, written by one Spalding, who formerly lived at Conneaut, and who died before publication. Many witnesses testified to threats of revenge from Hurlburt. One witness, who testified to the threats of Hurlburt, on cross-examination, being asked the reason why she had not communicated these threats to Smith, answered that she did not believe Hurlburt, or any other human being, had the power to hurt the prophet:—but Joe himself appears to have placed little reliance upon his divine invulnerability;—for he testified that he became afraid of bodily injury from the defendant. The Court finally ordered Hurlburt to find security in the sum of Two Hundred Dollars, to keep the peace for the period of six months.