Interview with the Mormon Prophet 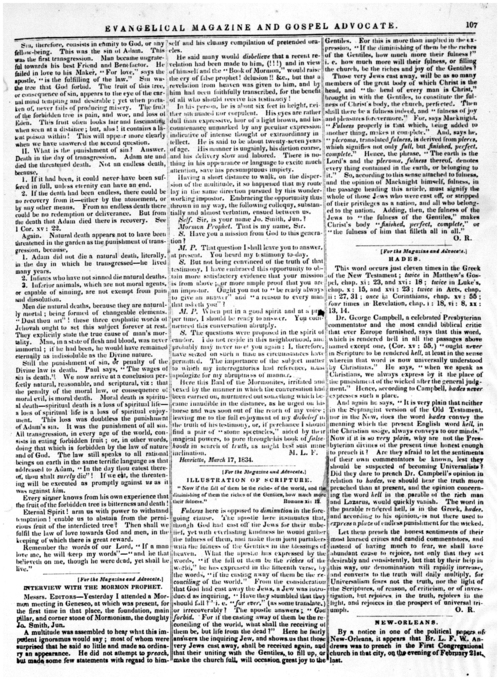 [ For the Magazine and Advocate. ]

INTERVIEW WITH THE MORMON PROPHET.

Messrs. EDITORS—Yesterday I attended a Mormon meeting in Genesseo, at which was present, for the first time in that place, the foundation, main pillar, and corner stone of Mormonism, the doughty Jo. Smith, Jun.

A multitude was assembled to hear what this impudent ignoramus would say; most of whom were surprised that he said so little and made so ordinary an appearance. He did not attempt to preach, but made some few statements with regard to himself and his clumsy compilation of pretended oracles.

He said many would disbelieve that a recent revelation had been made to him, (!!!) and in view of himself and the “Book of Mormon,” would raise the cry of false prophet! delusion!! &c., but that a revelation from heaven was given to him, and by him had been faithfully transcribed, for the benefit of all who should receive his testimony!

In his person, he is about six feet in height, neither attenuated nor corpulent. His eyes are rather dull than expressive, hair of a light brown, and his countenance unmarked by any peculiar expression indicative of intense thought or extraordinary intellect. He is said to be about twenty-seven years of age. His manner is ungainly, his diction coarse, and his delivery slow and labored.

There is nothing in his appearance or language to excite much attention, save his presumptuous impiety.

Having a short distance to walk, on the dispersion of the multitude, it so happened that my route lay in the same direction pursued by this wonder-working impostor. Embracing the opportunity thus thrown in my way, the following colloquy, substantially and almost verbatim, ensued between us.

Mormon Prophet. That is my name, Sir.

S. Have you a mission from God to this generation?

M.P. That question I shall leave you to answer, at present. You heard my testimony to-day.

S. But not being convinced of the truth of that testimony, I have embraced this opportunity to obtain more satisfactory evidence that your mission is from above; or more ample proof that you are an impostor. Ought you not to “be ready always to give an answer” and “a reason to every man that asketh you”?

M.P. When put in a good spirit and at a proper time, I should be ready to answer. You commenced this conversation abrutply.

S. The questions were proposed in the spirit of candor. I do not reside in this neighborhood, and probably may never meet you again: I, therefore, have seized on such a time as circumstances have permitted. The importance of the subject matter to which my interrogatories had reference, must apologize for any abruptness of manner.

Here this Baal of the Mormonites, irritated and vexed by the manner in which the conversation had been carried on, murmured out something which became inaudible in the distance, as he urged on his horse and was soon out of the reach of my voice; leaving me to the full enjoyment of my disbelief in the truth of his testimony, or, if perchance I should find a pair of “stone spectacles,” aided by their magical powers, to pore through his book of falsehoods in search of truth, as might best suit mine inclination.