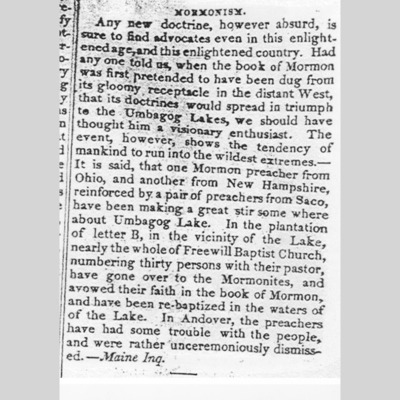 Any new doctrine, however absurd, is sure to find advocates even in this enlightened age, and this enlightened country. Had any one told us, when the book of Mormon was first pretended to have been dug from its gloomy receptacle in the distant West, that its doctrines would spread in triumph to the Umbagog Lakes, we should have thought him a visionary enthusiast. The event, however, shows the tendency of mankind to run into the wildest extremes.—It is said, that one Mormon preacher from Ohio, and another from New Hampshire, reinforced by a pair of preachers from Saco, have been making a great stir some where about Umbagog Lake. In the plantation of letter B, in the vicinity of the Lake, nearly the whole of Freewill Baptist Church, numbering thirty persons with their pastor, have gone over to the Mormonites, and avowed their faith in the book of Mormon, and have been re-baptized in the waters of the Lake. In Andover, the preachers have had some trouble with the people, and were rather unceremoniously dismissed.— Maine Inq.