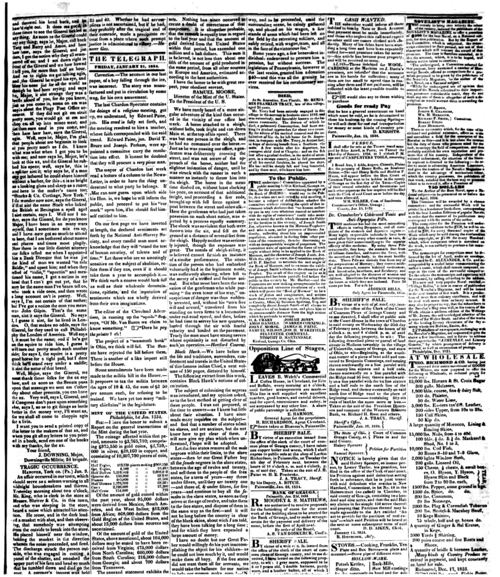 THE undersigned Committee appointed by a public meeting held in Kirtland, Geauga co. Ohio, for the purposes of ascertaining the origin of the Book of MORMON, would say to the public, that when met as directed by said meeting, it became a subject of deliberation whether the committee without violating the spirit of that instrument which declares that “no human authority can in any case whatsoever control or interfere with the rights of conscience” could take measures to avert the evils which threaten the Public by the location in this vicinity, of Joseph Smith Jun. otherwise known as the Mormon Prophet—and who is now, under pretense of Divine Authority, collecting about him an impoverished population, alienated in feeling from other portions of the community, thereby threatening us with an insupportable weight of pauperism.

The committee were of opinion that the force of truth ought without delay to be applied to the Book of Mormon, and the character of Joseph Smith, Jun. With this object in view, the committee employed D. P. Hurlbut to ascertain the real origin of the Book of Mormon, and to examine the validity of Joseph Smith’s claims to the character of a Prophet. The result of this enquiry so far as it has proceeded has been partially laid before the public in this vicinity by Mr. Hurlbut—and the committee are now making arrangements for the Publication and extensive circulation of a work which will prove the “Book of Mormon” to be a work of fiction and imagination, and written more than twenty years ago, in Salem, Ashtabula County, Ohio, by Solomon Spalding, Esq. and completely divest Joseph Smith of all claims to the character of an honest man, and place him at an immeasurable distance from the high station which he pretends to occupy.