Origin of the Mormons 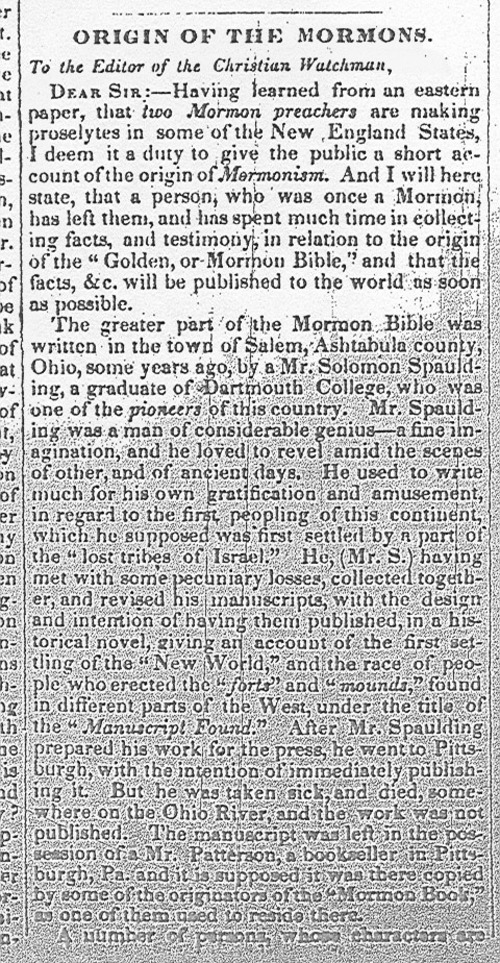 ORIGIN OF THE MORMONS.

To the Editor of the Christian Watchman,

DEAR SIR:—Having learned from an eastern paper, that two Mormon preachers are making proselytes in some of the New England States, I deem it a duty to give the public a short account of the origin of Mormonism. And I will here state, that a person, who was once a Mormon, has left them, and has spent much time in collecting facts, and testimony, in relation to the origin of the “Golden, or Mormon Bible,” and that the facts, &c. will be published to the world as soon as possible.

The greater part of the Mormon Bible was written in the town of Salem, Ashtabula county, Ohio, some years ago, by a Mr. Solomon Spaulding, a graduate of Dartmouth College, who was one of the pioneers of this country. Mr. Spaulding was a man of considerable genius—a fine imagination, and he loved to revel amid the scenes of other, and of ancient days. He used to write much for his own gratification and amusement, in regard to the first peopling of this continent, which he supposed was first settled by a part of the “lost tribes of Israel.” He, (Mr. S.) having met with some pecuniary losses, collected together, and revised his manuscripts, with the design and intention of having them published, in a historical novel, giving an account of the first settling of the “New World,” and the race of people who erected the “forts” and “mounds,” found in different parts of the West, under the title of the “Manuscript Found. ” After Mr. Spaulding prepared his work for the press, he went to Pittsburgh, with the intention of immediately publishing it. But he was taken sick, and died, somewhere on the Ohio River, and the work was not published. The manuscript was left in the possession of a Mr. Patterson, a bookseller in Pittsburgh, Pa. and it is supposed it was there copied by some of the originators of the “Mormon Book,” as one of them used to reside there.

A number of persons, whose characters are above reproach, and who were intimately acquainted with Mr. Spaulding, and who frequently read and heard him read his manuscripts, and who have read the “Book of Mormon,” have stated, that all the historical part of the Book, and most of the names, and many whole passages, are the writing of Mr. Spaulding. One evening an old lady, who was acquainted with Mr. S. and had often heard him read his writings, attended a Mormon meeting, and after it was closed, she remarked to a friend, that a man had been preaching from the writings of Mr. S. The Religious part had been added.* But Mr. S. wrote the work in ancient and biblical language. Mr. S. was the author of some novels, published some years ago, under a fictitious name. His wife is now living in Monson, Mass.

I have resided for more than a year past, in the vicinity of the “head quarters” of the Mormons. Their society is made up of the most ignorant part of the community, of men, alas! and of women too! who do not think, and act, and examine and reflect for themselves, but believe whatever others tell them, to be true. They are a poor deluded people, who deserve our pity and not our contempt. The leaders deserve the places assigned them for safe keeping of impostors.

Some who came into this vicinity last summer, have renounced Mormonism, and returned to the path of truth. And it is here confidently believed, that Mormonism, in a short time, will be scattered to the four winds, and the originators of this abomination will be obliged to seek a support in some other way.

The Mormons are supplying themselves with arms, &c. and say, “now they intend to fight.”

*Joseph Smith, Jr. called “the Mormon prophet,” is reported to be the author of these additions.