Men and Manners in America 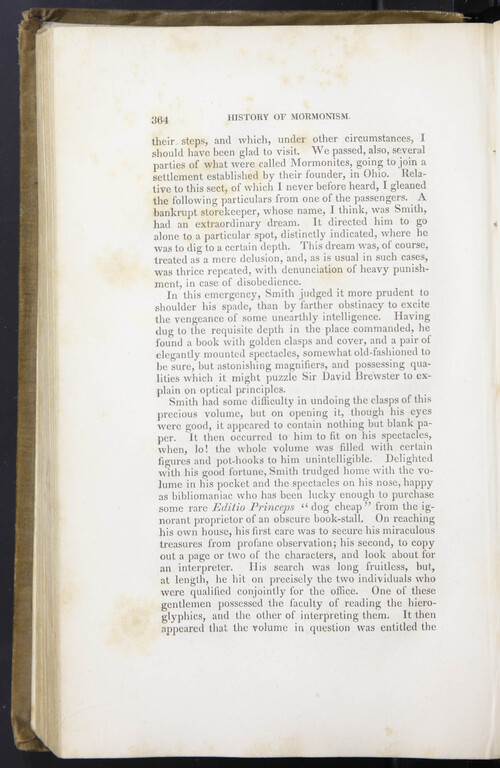 We passed, also, several parties of what were called Mormonites, going to join a settlement established by their founder, in Ohio. Relative to this sect, of which I never before heard, I gleaned the following particulars from one of the passengers. A bankrupt storekeeper, whose name, I think, was Smith, had an extraordinary dream. It directed him to go alone to a particular spot, distinctly indicated, where he was to dig to a certain depth. This dream was, of course, treated as a mere delusion, and, as is usual in such cases, was thrice repeated, with denunciation of heavy punishment, in case of disobedience.

In this emergency, Smith judged it more prudent to shoulder his spade, than by farther obstinacy to excite the vengeance of some unearthly intelligence. Having dug to the requisite depth in the place commanded, he found a book with golden clasps and cover, and a pair of elegantly mounted spectacles, somewhat old-fashioned to be sure, but astonishing magnifiers, and possessing qualities which it might puzzle Sir David Brewster to explain on optical principles.

Smith had some difficulty in undoing the clasps of this precious volume, but on opening it, though his eyes were good, it appeared to contain nothing but blank paper. It then occurred to him to fit on his spectacles, when, lo! the whole volume was filled with certain figures and pot-hooks to him unintelligible. Delighted with his good fortune, Smith trudged home with the volume in his pocket and the spectacles on his nose, happy as bibliomaniac who has been lucky enough to purchase some rare Editio Princeps “dog cheap” from the ignorant proprietor of an obscure book-stall. On reaching his own house, his first care was to secure his miraculous treasures from profane observation; his second, to copy out a page or two of the characters, and look about for an interpreter. His search was long fruitless, but, at length, he hit on precisely the two individuals who were qualified conjointly for the office. One of these gentlemen possessed the faculty of reading the hieroglyphics, and the other of interpreting. It then appeared that the volume in question was entitled the [364] book of Mormon, a converted Rabbi, who flourished in the days of our Saviour, or shortly after, and who, by the aid of divine inspiration, wrote the treatise in question in elucidation of all the dark points of religion, which, to the present day, continue to puzzle theologians.

Smith’s worldly prospects now brightened. With this invaluable treatise in his strong box, he commenced business afresh, under the firm of Mormon, Smith, and Co., and appears to possess an unlimited credit on the credulity of his followers. He has set up an establishment something similar to that of Mr. Owen, and already boasts a considerable number of opulent believers.