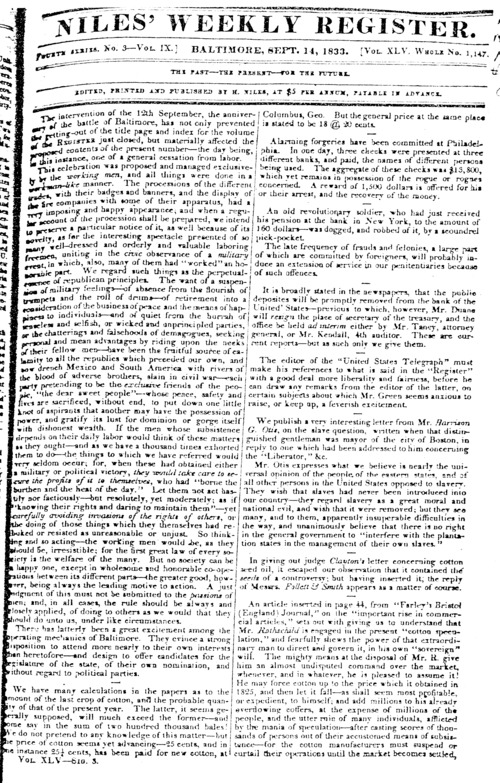 In copying the following from the “Missouri Republican” of the 9th August, we wish to be considered only as registering an uncommon transaction.

Some very extraordinary proceedings have recently taken place in Jackson county, in this state, against the sect of fanatics called Mormons. These proceedings may find some justification in the necessity of the case, but they are wholly at war with the genius of our institutions, and as subversive of good order as the conduct of the fanatics themselves. Perhaps, however, it was the only method which could have been effectually put in practice to get this odious description of population out of the way. Banished as they are from that frontier, it may well be asked to what place will they now remove; and will they enjoy any better security in the new abode which they may select? But to the proceedings:

A meeting of the citizens of Jackson county, to the number of four or five hundred, was held at Independence on the 30th of July. Their avowed object was to take measures to rid themselves of the Mormonites. Col. Richard Simpson was called to the chair, and Jones H. Flournoy and Samuel D. Lucas appointed secretaries. A committee was then appointed to report an address to the public, in relation to the object of the meeting. After having retired for some time, they submitted an address, which was unanimously adopted; and in which the conduct and views of the obnoxious sect, are exposed. They represent, that the Mormonites number some 1,200 souls in that county, and that each successive spring and autumn pours forth its swarms among them, with a gradual falling off in the character of the people, until they have now nearly reached the low condition of the black population. That the citizens have been daily told, that they are to be cut off, and their lands appropriated to the Mormons for inheritances; but they are not fully agreed among themselves as to the manner in which this shall be accomplished, whether by the destroying angel, the judgment of God, or the arm of power. The committee express their fears that, should the population continue to increase, they will soon have all the offices of the county in their hands; and that the lives and property of the other citizens would be insecure, under the administration of men who are so ignorant and superstitious as to believe that they have been the subjects of miraculous and supernatural cures; hold converse with God and his angels, and possess and exercise the gift of divination, and of unknown tongues; and are, withal, so poor as to be unable to procure bread and meat. The committee say, that “one of the means resorted to by them, in order to drive us to emigrate, is an indirect invitation to the free brethren of color in Illinois, to come like the rest to the land of Zion. True, the Mormons say this was not intended to invite but to prevent emigration; but this weak attempt to quiet our apprehension, is but a poor compliment to our understandings.” The invitation alluded to, contained all the necessary directions and cautions, to enable the free blacks, on their arrival there, to claim and exercise the rights of citizenship. Finally, the committee say—

Of their pretended revelations from heaven—their personal intercourse with God and his angels—the maladies they pretend to heal by the laying on of hands—and the contemptible gibberish with which they habitually profane the Sabbath, and which they dignify with the appellation of unknown tongues, we have nothing to say. Vengeance belongs to God alone. But as to the other matters set forth in this paper, we feel called on by every consideration of self preservation, good society, public morals and the fair prospects that, if not blasted in the germ, await this young and beautiful county, at once to declare, and we do hereby most solemly declare.

1. That no Mormon shall in future move and settle in this county.

2. That those now here, who shall give a definite pledge of their intention within a reasonable time to remove out of the county, shall be allowed to remain unmolested until they have sufficient time to sell their property and close their business without any material sacrifice.

3. That the editor of the “Star” be required forthwith to close his office, and discontinue the business of printing in this county; and as to all other stores and shops belonging to the sect, their owners must in every case strictly comply with the terms of the second article of this declaration, and upon failure, prompt and efficient measures will be taken to close the same.

4. That the Mormon leaders here, are required to use their influence in preventing any further emigration of their distant brethren to this county, and to counsel and advise their brethren here to comply with the above requisitions.

5. That those who fail to comply with these requisitions, be referred to those of their brethren who have the gifts of divination, and of unknown tongues, to inform them of the lot that awaits them.

Which address being read and considered, was unanimously adopted. And thereupon it was resolved that a committee of twelve be appointed forthwith to wait on the Mormon leaders, and see that the foregoing requisitions are strictly complied with by them; and upon their refusal, that said committee do, as the organ of this county, inform them that it is our unwavering purpose and fixed determination, after the fullest consideration of all the consequences and responsibilities under which we act, to use such means as shall ensure their full and complete adoption, and that said committee, so far as may be within their power do report to this present meeting. And the following gentlemen were named as said committee: Robert Johnson, James Campbell, col. Moses Wilson, Joel F. Chiles, hon. Richard Fristoe, Abner F. Staples, Garr Johnson, Lewis Franklin, Russel Hicks, esq. col. S. D. Lucas, Thomas Wilson and James M. Hunter, to whom was added col. R. Simpson, chairman.

And after an adjournment of two hours, the meeting again convened, and the committee of twelve reported that they called on Mr. Phelps, the editor of the “Star,” Edward Partridge the bishop of the sect, and Mr. Gilbert, the keeper of the Lord’s store house, and some others, and that they declined giving any direct answer to the requisitions made of them, and wished an unreasonable time for consultation, not only with their brethren here but in Ohio.

Whereupon, it was unanimously resolved by the meeting that the “Star” printing office should be razed to the ground, and the type and press secured. Which resolution was, with the utmost order, and the least noise or disturbance possible forthwith carried into execution, as also some other steps of similar tendency: but no blood was spilled or any blows inflicted. The meeting then adjourned to the 23d instant, to meet again to know further concerning the determination of the Mormons.

The citizens again convened on the 23d day of July, 1833, which was composed of gentlemen from all parts of the country and much more unanimously attended than the meeting on the 20th instant.

The meeting was organized by the chairman taking his seat when the following gentlemen were appointed a committee, to wit:

Henry Chiles, esq. Dr. N. K. Olmstead, H. L. Brazile, esq. Zachariah Wallef, Samuel Weston, esq. William L. Irwin, Leouidas Oldham, S. C. Owens, esq. George Simpson, captain Benjamin Majors, James C. Saddler, col. William Bowers, Henry Younger, Russel Hicks, esq. Aaron Overton, John E. Harris and Harmon Gregg, to wait upon the Mormon leaders, who had intimated a wish to have a conference with said committee. After an adjournment of two hours, the meeting again convened, when that committee reported to the meeting that they had waited on most of the Mormon leaders, consisting of the bishop, Mr. Partridge, Mr. Phelps, editor of the Star, Mr. Gilbert, the keeper of the Lord’s store house, and Messrs. Carrol, Whitmer and Moseley, elders of the church, and that the said committee had entered into an amicable agreement with them, which they had reduced to writing, which they submitted; and that the committee have assured Mr. Phelps that whenever he was ready to move, that the amount of all his losses should be paid to him by the citizens. The written agreement is as follows:

“Memorandum of agreement between the undersigned of the Mormon society, in Jackson county, Missouri, and a committee appointed by a public meeting of the citizens of said county, made the 23rd day of July, 1833.

“It is understood that the undersigned, members of the society, do give the following pledges, each for himself, as follows to wit:

“That Oliver Cowdry, W. W. Phelps, William McClealan, Edward Partridge, Lyman Wight, Simeon Carter, Peter and Whitmer, and Harvey Whitlock, shall remove their families out of this county, on or before the first day of January next, and that they, as well as the two hereinafter named, use all their influesce to induce all their brethren now here to remove as soon as possible—one half, say, by the first of January next and all by the first day of April next. To advise and try all means in their power, to stop any more of their sect from moving to this county; and as to those now on the road, they will use their influence to prevent their settling permanently in the county, but that they shall only make arrangements for temporary shelter, till a new location is agreed on for the society. John Carrol and Algernon Gilbert are allowed to remain as general agents to wind up the business of the society, so long as necessity shall require; and said Gilbert may sell out his merchandise now on hand, but is to make no new importation.

“The ‘Star’ is not again to be published, nor a press set by any of the society in this county.

“If the said Edward Partridge and W. W. Phelps move their families by the first day of January, as aforesaid, that they themselves will be allowed to go and come in order to transact and wind up their business.

“The committee pledge themselves to use all their influence to prevent any violence being used so long as a compliance with the foregoing terms is observed by the parties concerned, to which agreement is zubscribed the names of the above named committee, as also those of the Mormon brethren named in the report as having been present.”

The report of the committee was unanimously adopted by the meeting, and it was then adjourned.

A letter dated St. Louis, July 26, and published in the “Delaware Journal,” says—

“You have no doubt heard of the Mormonites. A few days since, the people residing in and near their village on the Missouri, became exasperated at some specimens of their predatory habits, and proceeding in a body to their village, demolished their printing establishment, and the dwelling of their high priest, and inflicted considerable injury upon the person as property of the whole brotherhood. The high priest was tarred and feathered, and paraded through the village in a cart. “The personage who impiously assumed the name of Christ, and professed to enjoy eternal life, gave the lie to his pretensions by dying last Wednesday, while on his way up the river to Independence—the name of their settlement.—”