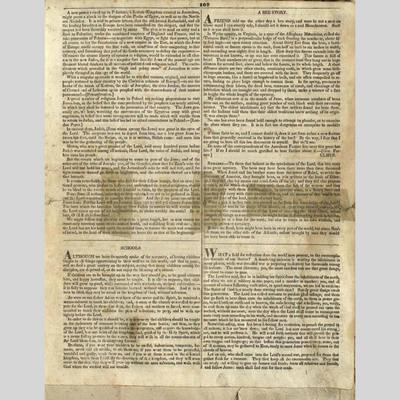 A FRIEND told me the other day a bee story, and were he not a man on whose word I can strictly rely, I should set it down as a real Munchausen. Such as it is you shall have it.

In Wythe county, in Virginia, in a spur of the Alleghany Mountains, called the ‘Tobacco Row,’ is a perpendicular ledge of rock fronting the southeast, about fifty feet high—an open sunny situation. About thirty feet from the base, a horrizontal crack or fissure opens in the rock, from half an inch to six inches in width, and extending near eighty feet in length. How deep this fissure extends into the mountain is not known, as no one has ever examined it. This fissure is full of bees! Their numbers are so great, that in the summer time they hang out in huge clusters for several feet, above and below the fissure, in its whole length. A short distance above are two other cracks, containing earth, in which grow some little chinquapin bushes, and these are covered with the bees. They frequently go off in huge swarms, like a barrel or hogshead in bulk, and are often compelled to return, finding no place large enough to contain them. In the spring, previous to commencing their labors, the dead bees, remnants of comb, and cleanings of the habitation which are brought out and dropped by them, make a winrow of a foot in height the whole length of the opening.

My informant saw it in the month of June, when immense numbers of bees were out on the surface, making great patches of rock black with their swarming masses. The oldest inhabitants say that the first settlers found the bees there, and the Indians told them that their oldest traditions knew nothing of its origin. ‘It was always there.’

No one has ever been found bold enough to attempt its plunder, or to examine the place where they are. It is in fact too dangerous an enterprise to meddle with.

If these facts be so, and I cannot doubt it, does it not form rather a new feature from that generally received in the history of the bee? By the way, I fear that I am going to have all this bee discussion to myself. But we’ll see.

Do none of the correspondents of the American Farmer live near this great bee hive? If so I should be much gratified to hear further about it. [Gen. Farmer.]

What a pity it is that man has strayed so far from the knowledge of the Lord! Created as he was in the image of his Maker, an agent unto himself, and capable, by obeying the commandments of the Lord of receiving the Holy Ghost, which bringeth all things to remembrance, he might let his understanding reach to heaven, and never be at a loss for the truth; but alas he trusts in his own wisdom, and scarcely arrives at certainty.

Before the flood, bees might have been in every part of the world, but since Noah left them on the other side of the Atlantic, unless brought by man they would not have been able to cross it.