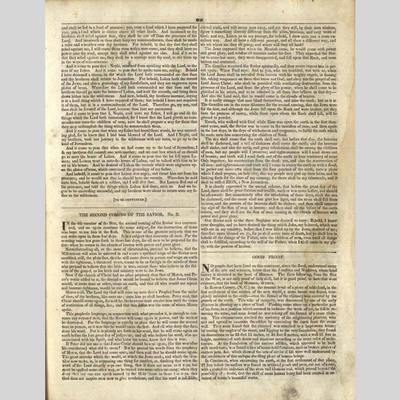 NO people that have lived on this continent, since the flood, understood many of the arts and sciences, better that the Jaredites and Nephites, whose brief history is sketched in the book of Mormon. The facts following, from the Star in the West, is not only proof of their skill, but it is good proof, to those that want evidence, that the book of Mormon, IS TRUE.

In Rowan County, (N. C.) on the summit level of a piece of table land, in the first settlement of that section of the new world, a stone house was found, completely imbedded in the earth—even the funnel of the chimney was covered by the growth of the earth. This relic of antiquity, was discovered by one of the early planters in plowing up a piece of land. Finding some stone on a particular part of his farm, in a position which seemed to indicate the work of art, he fell to removing the same, and soon found he was taking off the funnel of a stone chimney. This circumstance excited the curiosity of the neighboring planters, who met and agreed to examine the edifice by excavating the earth from the stone wall. They soon found that the chimney was attached to a large stone house; by tracing the angles of the same, and digging to the very foundation, they found its dimensions to be 23 feet 11 inches, by 36 feet 3 inches, with a wall 15 feet in height, constructed with doors and windows according to the strict rules of architecture. At the foundation of this ancient edifice, which appeared to be built with much taste, was found relics of house-hold furniture, such as broken pieces of earthen pots, &c. which showed the arts of civilized life were well understood by the inhabitants of this antique dwelling place of human beings.

In Cincinnati, when excavating the earth, at the first settlement of that place, 27 feet below the surface was found an artificial peach and pear, cut out of stone, with a complete imitatiou of the stem and blossom end, which proved beyond the possibility of a doubt, that the skill of some human being had been exerted in imitation of nature’s beautiful works.