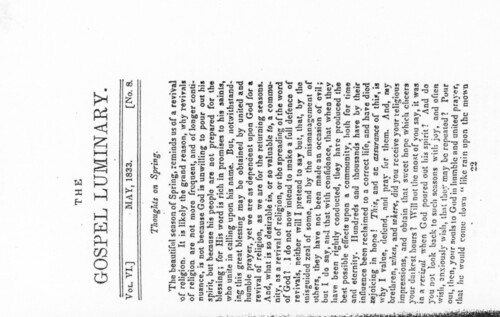 “Among the wonders of the present day, you may record the following. Many of the people called Mormons have arrived at this place, and it is said more are on the way. The condition of those who are here, must be very unpleasant, and their sufferings are, in no small degree, from the want of comfortable houses, and something on which to subsist. Their settlement extends to the west line of Missouri State, two miles and a half from this place; they manifest a disposition to, and no doubt soon would go among the Indians, were they permitted; which by the way is not the case. They call this place the Mount Zion, or New Jerusalem, so often spoken of in Scripture;—though it is not more elevated than the common face of the country, nor yet is there in it any thing strange or peculiarly prepossessing in its favour, more than any other portion of the west.

Here, they tell us, will be gathered the Gentiles from the East, and the Jews (the Indians) from the West, to their temple, which shall subsequently be built on the very spot now selected by them, to which they say, their God will come in person, destroying all who shall be so daringly wicked, as to reject their gospel; when Christ comes, which at most will not be more than fifteen years, he will bring all the apostles, and old saints, and will reign with them here a thousand years; during this reign, the rest of the dead, shall not live (that is, all who are not Mormons,) for this is the first resurrection. To support the idea of their Christ suddenly coming to their temple, to purify and refine them, they read Malachi, 3d chap. to the 6th verse inclusive, with other Scriptures found in Zephaniah, Zechariah, and elsewhere, all of which refer to the coming of Christ.

They have a revelation of their own, which, they affirm, was given to the people of this continent, (the Indians,) on plates, and deposited in the earth, and kept concealed in the earth of the Lord, till the fulfilment of its time, which has now been accomplished: and to prove that Joseph Smith is that wonderful prophet, to whom these marvellous plates and their profound mysteries [263] should be revealed, they recite the 29th chapter of Isaiah, saying that the prophet Smith is that unlearned man, to whom the book was given to read, and he said I cannot, for I am not learned! But this difficulty was soon removed by the spirit which came upon him, and blest him with the gift of tongues. The book then was clearly opened to his understanding, and he translated it to one of the witnesses, who wrote it in our lauguage. Thus according to the 37th chapter of Ezekiel, say they, the sticks there spoken of, (the Mormon book and our Bible,) are become one in the hand of the prophet Smith; or shall, when our Bible shall be rightly translated by him, under the outpouring of his holy spirit, and its directions. Every person who tells them, that he wishes to forsake sin, is without further ceremony, taken by the Elder, and baptized for the remission of his sins; he is now told that he shall soon receive the spirit; this being accomplished, the Elder lays his hands on him, and imparts to him his holy spirit, which they say they then feel immediately, and know that it is the truth. The Elder now sings to the new converts, consecrating songs of their own diction, (composing,) and to them he reads prophecies about giving their possession to the Lord’s store, which if they fail to do, they forfeit the fellowship of the fraternity, nor will they long be considered worthy members with them. When their property is thus laid at the bishop’s feet, he places it in the store, and they lose sight of it for ever; their storekeeper will not trust them for a single dollar, though he willingly gives credit to others.

If the brotherhood is once taken, and any should choose to leave them, he must go out empty, however much he had deposited in the treasury. Much is said among them about the Holy Ghost being given, by the laying on of the Elder’s hand, about prophecying, healing the sick, and the interpretation of tongues; all this however they carefully avoid, saying that these things can only be done, when they are in the spirit, which perhaps but seldom happens in this land of pilgrims; since no miracles have been done here at any time by them, though greatly needed, and they have been abundantly pressed to it. They eat, they drink, are sick, and die, as all others do.

[264] When they are sick, unfortunately, they have not faith to be healed. Of the dying they say, their work is done, they must go; they also say, it is self-evident that disease is the natural effect of unbelief. If this be true, I am sure their faith cannot be as large as a mustard seed, for none are more liable to sickness, and all contagions, than themselves, the cholera not excepted, even among their preachers. Perhaps when their Christ comes, and brings their old Apostles and Saints, some of them may profess more power of faith than these, that are already here; if this should not be so, I shall finally despair of seeing miracles done by them.