Rise and Progress of the Church of Christ 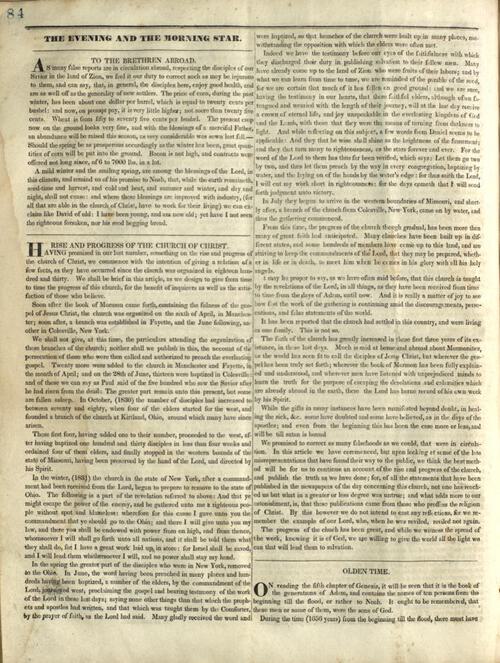 RISE AND PROGRESS OF THE CHURCH OF CHRIST.

HAVING promised in our last number, something on the rise and progress of the church of Christ, we commence with the intention of giving a relation of a few facts, as they have occurred since the church was organized in eighteen hundred and thirty. We shall be brief in this article, as we design to give from time to time the progress of this church, for the benefit of inquirers as well as the satisfactions of those who believe.

Soon after the book of Mormon came forth, containing the fulness of the gospel of Jesus Christ, the church was organized on the sixth of April, in Manchester; soon after, a branch was established in Fayette, and the June following, another in Colesville, New York.

We shall not give, at this time, the particulars attending the organization of these branches of the church; neither shall we publish in this, the account of the persecution of those who were then called and authorized to preach the everlasting gospel. Twenty more were added to the church in Manchester and Fayette, in the month of April; and on the 28th of June, thirteen were baptized in Colesville: and of these we can say as Paul said of the five hundred who saw the Savior after he had risen from the dead: The greater part remain unto this present, but some are fallen asleep. In October, (1830) the number of disciples had increased to between seventy and eighty, when four of the elders started for the west, and founded a branch of the church at Kirtland, Ohio, around which many have since arisen.

These first four, having added one to their number, proceeded to the west, after having baptized one hundred and thirty disciples in less than four weeks and ordained four of them elders, and finally stopped in the western bounds of the state of Missouri, having been preserved by the hand of the Lord, and directed by his Spirit.

In the winter, (1831) the church in the state of New York, after a commandment had been received from the Lord, began to prepare to remove to the state of Ohio. The following is a part of the revelation referred to above: And that ye might escape the power of the enemy, and be gathered unto me a righteous people without spot and blameless: wherefore for this cause I gave unto you the commandment that ye should go to the Ohio; and there I will give unto you my law, and there you shall be endowed with power from on high, and from thence, whomsoever I will shall go forth unto all nations, and it shall be told them what they shall do, for I have a great work laid up in store: for Israel shall be saved, and I will lead them whithersoever I will, and no power shall stay my hand.

In the spring the greater part of the disciples who were in New York, removed to the Ohio. In June, the word having been preached in many places and hundreds having been baptized, a number of the elders, by the commandment of the Lord, journeyed west, proclaiming the gospel and bearing testimony of the work of the Lord in these last days; saying none other things than that which the prophets and apostles had written, and that which was taught them by the Comforter, by the prayer of faith, as the Lord has said. Many gladly received the word and were baptized, so that branches of the church were built up in many places, notwithstanding the opposition with which the elders were often met.

Indeed we have the testimony before our eyes of the faithfulness with which they discharged their duty in publishing salvation to their fellow men. Many have already come up to the land of Zion who were fruits of their labors; and by what we can learn from time to time, we are reminded of the parable of the seed, for we are certain that much of it has fallen on good ground: and we are sure, having the testimony in our hearts, that those faithful elders, although often fatigued and wearied with the length of their journey, will at the last day receive a crown of eternal life, and joy unspeakable in the everlasting kingdom of God and the Lamb, with those that they were the means of turning from darkness to light. And while reflecting on this subject, as few words from Daniel seems to be applicable: And they that be wise shall shine as the brightness of the firmament; and they that turn many to righteousness, as the stars forever and ever. For the word of the Lord to them has thus far been verified, which says: Let them go two by two, and thus let them preach by the way in every congregation, baptizing by water, and the laying on of the hands by the water’s edge; for thus saith the Lord, I will cut my work short in righteousness: for the days cometh that I will send forth judgment unto victory.

In July they began to arrive in the western boundaries of Missouri, and shortly after, a branch of the church from Colesville, New York, came on by water, and thus the gathering commenced.

From this time, the progress of the church though gradual, has been more than many of great faith had anticipated. Many churches have been built up in different states, and some hundreds of members have come up to this land, and are striving to keep the commandments of the Lord, that they may be prepared, whether in life or in death, to meet him when he comes in his glory with all his holy angels.

It may be proper to say, as we have often said before, that this church is taught by the revelations of the Lord, in all things, as they have been received from time to time from the days of Adam, until now. And it is really a matter of joy to see how fast the work of the gathering is continuing amid the discouragements, persecutions, and false statements of the world.

It has been reported that the church had settled in this country, and were living as one family. This is not so.

The faith of the church has greatly increased in these first three years of its existence, in these last days. Much is said at home and abroad about Mormonites, as the world has seen fit to call the diciples of Jesus Christ, but wherever the gospel has been truly set forth; wherever the book of Mormon has been fully explained and understood, and wherever men have listened with unprejudiced minds to learn the truth for the purpose of escaping the desolations and calamities which are already abroad in the earth, there the Lord has borne record of his own work by his Spirit.

While the gifts in many instances have been manifested beyond doubt, in healing the sick, &c. some have doubted and some have believed, as in the days of the apostles; and even from the beginning this has been the case more or less, and will be till satan is bound.

We promised to correct as many falsehoods as we could, that were in circulation. In this article we have commenced, but upon looking at some of the late misrepresentations that have found their way to the public, we think the best method will be for us to continue an account of the rise and progress of the church, and publish the truth as we have done; for, of all the statements that have been published in the newspapers of the day concerning this church, not one has reached us but what in a greater or less degree was untrue; and what adds more to our astonishment, is, that these publications came from those who profess the religion of Christ. By this however we do not intend to cast any reflections, for we remember the example of our Lord, who, when he was reviled, reviled not again.

The progress of the church has been great, and while we witness the spread of the work, knowing it is of God, we are willing to give the world all the light we can that will lead them to salvation.