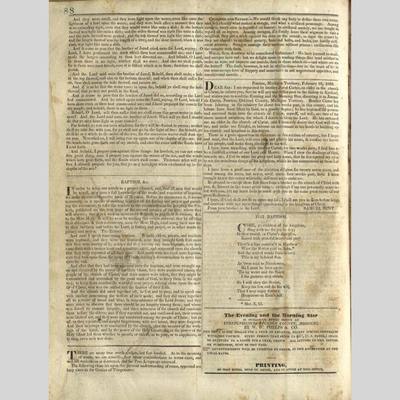 IN order to keep our minds in a proper channel, and, that all men that would be saved, may have a full knowledge of the mode, and requisites of baptism, we make an extract from the book of Mormon. Before we commence it, it seems necessary, as it speaks of meeting together oft for fasting and prayer and partaking the sacrament, to refer the readers to the commandment for keeping the Sabbath, published on the first page of the second number of the star; where they will observe, that it is a duty to meet every Sabbath to pay their devotions, &c. to the Most High.

It will be seen by reading this commandment, that by offering their oblations & their sacraments, unto the Most High, confessing their sins unto their brethren and before the Lord, is fasting and prayer, or in other words rejoicing and prayer. The Extract:

And now I speak concerning baptism. Behold, elders, priests, and teachers were baptized; and they were not baptized, save they brought forth fruit meet that they were worthy of it; neither did they receive any unto baptism, save they came forth with a broken heart and a contrite spirit, and witnessed unto the church that they truly repented of all their sins. And none were received unto baptism, save they took upon them the name of Christ, having a determination to serve him unto the end.

And after that they had been received unto the baptism, and were wrought upon and cleansed by the power of the Holy Ghost, they were numbered among the people of the church of Christ, and their names were taken, that they might be remembered and nourished by the good word of God, to keep them in the right way, to keep them continually watchful unto prayer, relying alone upon the merits of Christ, who was the author and the finisher of their faith.

And the church did meet together oft, to fast and to pray, and to speak one with another, concerning the welfare of their souls; and they did meet together oft to partake of bread and wine, in remembrance of the Lord Jesus; and they were strict to observe that there should be no iniquity among them; and whoso was found to commit iniquity, and three witnesses of the church did condemn them before the elders; and if they repented not, and confessed not, their names were blotted out, and they were not numbered among the people of Christ; but as oft as they repented, and sought forgiveness, with real intent, they were forgiven. And their meetings were conducted by the church, after the manner of the workings of the spirit, and by the power of the Holy Ghost: for as the power of the Holy Ghost led them whether to preach, or exhort, or to pray, or to supplicate, or to sing, even so it was done.

THERE are many true words spoken, but few heeded. As to the meaning of words, we are sensible, that many contradictions in terms exist, and will till wickedness is destroyed, and the Pure Language returned.

The following close hit upon the present understanding of terms, appeared not long since in the Genius of Temperance:

CIVILIZED AND SAVAGE.—We would thank any body to define these two terms, and tell exactly what makes a savage, and what a civilized personage. Among savages, every man is regarded as honest: in civilized society, we are taught to regard all as rogues. Among savages, if a family leave their wigwam to visit a neighbor, they put a stick against the door on the outside, to show the passer by they are absent: in civilized society, bars and bolts, and locks, are hardly sufficient security. Savages manage their matters without prisons: civilization fills the country with them.

Which, then, deserves to be considered barbarians? We have learned to read—and savages have not: but we delight more in reading things that tend neither to make us wise, nor improve our morals, than in those which do—and where are we the better? The fault, however, is not in civilization—but in the want of it: in our semi-savage love of frippery and nonsense: in our ungoverned appetites, and uncultivated morals.

DEAR SIR: I am requested by brother Jared Carter, an elder in the church of Christ, to inform you, that he will pay one dollar over to the bishop in Kirtland, and wishes you to send the Evening and the Morning Star, directing it to Jeremiah Curtis, Pontiac, Oakland County, Michigan Territory. Brother Carter has been laboring in the ministry for about five weeks past, in this county, and his labors have been blest by God, to a goodly degree; he has baptized 22 persons and received them into the church of Christ, myself, and wife, are two of the above named members, for which I desire to bless the Lord. He has ordained me an elder in the church of Christ, and I earnestly desire that God will bless me, and make me faithful, to become an instrument in his hands in building up his church and kingdom in this region.

There is a great opposition to this cause in this section of country, but I hope and trust, that the Lord, will over rule and glorify his name, & subdue the hearts of his people, and make them obedient to his will.

I have been travelling with brother Carter, for two weeks past; I find him to be a faithful servant of our Lord and Master. When I view the dealings of God, towards me, I feel to adore his great and holy name, that he has opened my eyes to see the wondrous things of his kingdom, which he has commenced in these last days.

I have been a professor of the christian religion for twenty seven years, and stood among the sects, but never, until about four weeks past, have I been brought to see the errors which the different sects embrace.

I hope, if God shall see fit to spare my life, I shall see you in Zion before long, and converse with you upon things appertaining to the kingdom of Christ.

From your brother in the Lord.