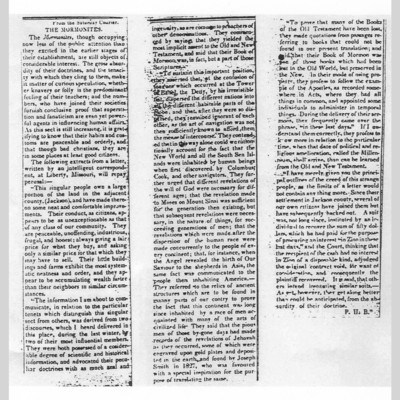 From the Saturday Courier.

The Mormonites, though occupying now less of the public attention than they excited in the earlier stages of their establishment, are still objects of considerable interest. The gross absurdity of their doctrines, and the tenacity with which they cling to them, make it matter of curious speculation, whether knavery or folly is the predominant feeling of their teachers; and the numbers, who have joined their societies furnish conclusive proof that superstition and fanaticism are even yet powerful agents in influencing human affairs. As this sect is still increasing, it is gratifying to know that their habits and customs are peaceable and orderly, and that though bad christians, they are in some places at least good citizens.

The following extracts from a letter, written by an intelligent correspondent, at Liberty, Missouri, will repay perusal:—

“This singular people own a large portion of the land in the adjacent county, (Jackson), and have made thereon some neat and comfortable improvements. Their conduct, as citizens, appears to be as unexceptionable as that of any class of our community. They are peaceable, unoffending, industrious, frugal, and honest; always giving a fair price for what they buy, and asking only a similar price for that which they may have to sell. Their little buildings and farms exhibit the most systematic neatness and order, and they appear to be accumulating wealth faster than their neighbors in similar circumstances.

“The information I am about to communicate, in relation to the particular tenets which distinguish this singular sect from others, was derived from two discourses, which I heard delivered in this place, during the last winter, by two of their most influential members. They were both possessed of a considerable degree of scientific and historical information, and advocated their peculiar doctrines with as much zeal and ingenuity, as are common to preachers of other denominations. They commenced by saying that they yielded the most implicit assent to the Old and New Testament, and said that their Book of Mormon was, in fact, but a part of those Scriptures.

“I’d sustain this important position, they asserted that, at the confusion of tongues which occurred at the Tower of Babel, the Deity, by his irresistible fist, dispersed the differing nations into all the different habitable parts of the globe; and that, after they were so dispersed, they remained ignorant of each other, as the art of navigation was not then sufficiently known to afford them the means of intercourse. They contended that in this way alone could we rationally account for the fact that the New World and all the South Sea Islands were inhabited by human beings when first discovered by Columbus, Cook, and other navigators. They further urged that different revelations of the will of God were necessary for different ages; that the revelation made to Moses on Mount Sinai was sufficient for the generation then existing, but that subsequent revelations were necessary, in the nature of things, for succeeding generations of men; that the revelation which were made after the dispersion of the human race were made concurrently to the people of every continent; that, for instance, when the Angel revealed the birth of Our Savior to the shepherds in Asia, the same fact was communicated to the people then inhabiting America.—They referred to the relics of ancient structures which are to be found in manny parts of our contry to prove the fact that this continent was long since inhabited by a race of men acquainted with many of the arts of civilized life. They said that the pious men of those by-gone days had made records of the revelations of Jehovah as they occurred, some of which were engraved upon gold plates and deposited in the earth, and found by Joseph Smith in 1827, who was favoured with a special inspiration for the purpose of translating the same.

“To prove that many of the books of the Old Testament have been lost, they made quotations from passages referring to books that could not be found in our present translation; and said that their Book of Mormon was one of those books which had been lost in the Old World, but preserved in the New. In their mode of using propeity, they profess to follow the example of the Apostles, as recorded somewhere in Acts, where they had all things in common, and appointed some individuals to administer in temporal things. During the delivery of their sermons, they frequently came over the phrase, “in the last days.” If I understand them correctly, they profess to know more in relation to the particular time, when that date of political and religious amelioration, called the Millennium shall arrive, than can be learned from the Old and New Testament.

“I have merely given you the principal outlines of the creed of this strange people, as the limits of a letter would not contain any thing more. Since their settlement in Jackson county, several our own citizens have joined them but have subsequently backed out. A suit was, not long since, instituted by an individual to recover the sum of fifty dollars, which he had paid for the purpose of procuring an interest “in Zion in these last days,” and the Court, thinking that the recipient of the cash had no interest in Zion of a disposable kind, adjudged the original contract void, for want of consideration, and consequently the plaintiff recovered. It is said, that others intend instituting similar suits.—As yet, however, they get along better than could be anticipated, from the absurdity of their doctrine.