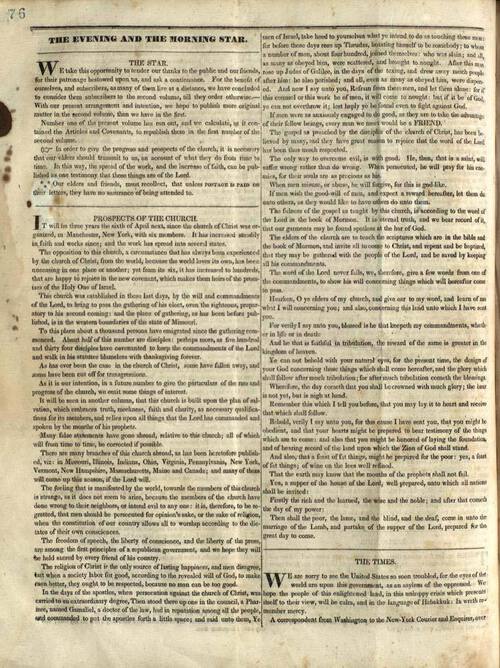 WE are sorry to see the United States so soon troubled, for the eyes of the world are upon this government, as an asylum of the oppressed. We hope the people of this enlightened land, in this unhappy crisis which presents itself to their view, will be calm, and in the language of Habakkuk: In wrath remember mercy.

A correspondent from Washington to the New-York Courier and Enquirer, over [76] the signature of “The spy in Washington,” thus wrote on the 20th of January:—“Dark and portentious are the clouds which overshadow our land. Doubt and uncertainty accompanies every movement. Hushed, in silence, is the voice of murmur. Deep and settled anxiety is depicted in the countenance of every thinking man. In high places, reason has resigned to passion, her empire over the mind. The great and fundamental principles of our Constitution are in jeopardy.

The arm of power is to be strengthened and outstretched. The feeble are to be smitten and trodden down; and the mighty are to march over their desolate places. This government of compromise and concession, is to be made, a government of force. The decree, has gone forth, and who shall stay its direful effects? Conflicting and contending factions have locked arms, and stand shoulder to shoulder, in the cause of the strong against the weak.”

This is a melancholy picture for a republican government. If it is really as above stated, it augurs the near approach of that day, that will try men’s hearts: yea, the time that war shall be poured out upon all nations, which shall continue until the consumption decreed shall make a full end of them. For it is written: Nation shall rise against nation, and kingdom against kingdom: And great earthquakes shall be in divers places, and famines, and pestilences, and fearful sights and great signs shall there be from heaven.

No one can be mistaken, if he looks at the signs of the times as they are: The harvest is nearly ripe. The hour of the Lord is nigh, even at the doors, and who are ready? not the rebellious, for they are not the blood of Ephraim. The meek only shall inherit the earth. It was said by Isaiah: Behold, the Lord will come with fire and with chariots like a whirlwind, to render his anger with fury, and his rebuke with flames of fire. For by fire and by his sword will the Lord plead with all flesh: and the slain of the Lord shall be many.

The Lord has begun to plead with all flesh, that some in these last days may have part in the first resurrection, and he will not slack his hand: No, he will continue to plead by the mouths of his servants; and by the voice of calamities, and by the voice of the thunder of heaven; and by the fierce vivid lightning, and by earthquakes till all that are alive shall know him, and serve him from the least even to the greatest. Truly, this is a day of warning and not a day of many words, among them that mean to do the will of their Lord and Master.

The Lord has said to his deciples, let the solemnities of eternity rest upon your minds, and they have every reason to do so: or if the elders go to preach to the north, or to the south, or to the east, or to the west, they can not go amiss, for the Lord has some precious souls, among every nation, kindred, tongue, and people.

Though nations shall break the links that hold governments together; though kingdoms shall dissolve, and though the friendship of many shall cease, still the kingdom of Jesus Christ will continue to increase and flourish, until the stone cut out of the mountain without hands, shall have filled the whole earth.

In view of this glorious day, notwithstanding the wicked shall be cut off, and the kingdoms of this world dissolved by the arm of the Almighty, the saints shall grow in love to one another, and to their Savior, and shall increase in faith till the curtain of heaven shall be unfolded as a scroll when it is rolled together, and they shall see the face of God.

The Lord is full of mercy, and he will call upon all men, every where, to repent. There is no eye that shall not see; nor ear that shall not hear, and no heart that shall not be penetrated; when the people are so hardened in sin, that they refuse to hear the men that the Lord chooses to warn them, then he sends, plagues and pestilence, as seemeth him good, and he will continue to do so until the righteous are gathered, and the wicked destroyed.

Happy is he that is wise and seeks to save himself, for if he asks he shall receive, and when he knocks it shall be opened unto him.

The continent of America is a choice land above all others, and, ever since men have dwelt upon it, if they were virtuous, and walked uprightly before the Lord, they have been blessed: When they have not done so, they have been visited with calamities.

Perhaps few are aware, that the situation of the country, is still the same, for God is the same yesterday, today, and forever.

The following words of Alma, on the subject, are conclusive: And now it come to pass that after Alma had said these things to Helaman, he blessed him, and also his other sons; and he also blessed the earth, for the righteous’ sake.—And he said, Thus saith the Lord God: Cursed shall be the land, yea, this land, unto every nation, kindred, tongue, and people, unto destruction, which do wickedly, when they are fully ripe; and as I have said, so shall it be: for this is the cursing and the blessing upon the land, for the Lord cannot look upon sin with the least degree of allowance. He that knows the law of God cannot escape his judgments, unless he fulfills the requirements of that law.

The day of vengeance is at hand, when men must suffer the wrath of God in this world, and the world to come, unless they repent.

The saint can look upon the world and say, farewell: My God and my salvation are my all, for I want to inherit eternal life.

But the man of the world, when he looks upon the world, with all its allurements, exclaims: Let me become rich, for I want to live at ease, and enjoy the good of my life. But alas! the times change, and with them the condition of many change also; &c where man looks for happiness he often finds misery, so that men might rather say: This world is hardly worth possessing, without a hope in the world to come, through the merits of Jesus Christ.

One of the great men of the earth once said: Crowns won by blood, by blood must be maintained; and a greater than man said: Put up again thy sword into its place: for all they that take the sword, shall perish with the sword.

The voice of the angel to the shepherds when the Savior was born was, Fear not: for behold, I bring you good tidings of great joy, which shall be to all people.—And suddenly there was with the angel a multitude of the heavenly host praising God, and saying, Glory to God in the highest, and on earth peace, good will toward men.

What a happy time it will be, when all that are left alive on the earth, can shout and sing likewise! when the nations will learn war no more! when man will not seek an opportunity to take the advantage of his fellow man!

There will be none to molest or make afraid then: for there will be peace on earth and good will to men.

Men are agents unto themselves, and they can prepare for a kingdom of glory, or, for one without glory. The language of the Savior, is, The Spirit and the bride say, Come: and let him that heareth say, Come: for the hour of redemption is nigh.