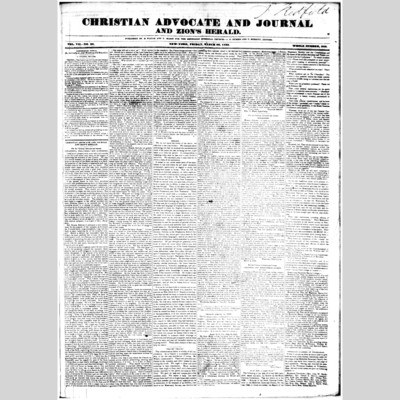 For the Christian Advocate and Journal MORMONISM.

Messrs. Editors:—I have not observed in any religious periodical, a notice of the progress of Mormonism in this quarter. It is now about two years since Joseph Smith, its founder, who, by the by, was an illiterate, indolent, though artful, young man, announced the intelligence, that in the town of Palmyra, Wayne county, New York, he had discovered a book of golden leaves, written in strange characters, which, when interpreted, was a new revelation to mankind,—that he was divinely inspired, or qualified to open the book, and to make interpretation thereof. This being effected, a book of about three hundred pages, octavo, appeared before the public, written in the style of Chronicles, consisting of dull stories and senseless discourses, between and concerning individuals of strange names, among which was “Mormon.”—On almost every page of the work, the king’s English was terribly mangled and murdered, in the hands of the author; and it was quite apparent to the reader, that whatever else Joseph Smith was inspired to do, he was not qualified to make revelations in his own mother tongue.

Soon after the appearance of the book, Smith and his associates went to Ohio, where it is well known that some hundreds of disciples were soon gathered. Among the new revelations which the leaders of that body were in the daily habit of announcing, were certain injunctions to do those deeds, which, in the Christian Scriptures are denominated filthiness and abominable wickedness. In short, their conduct was such that the citizens of the surrounding country interfered and abated their establishment as a public nuisance.

The good people of western New York had flattered themselves that an imposture so ridiculous in itself, and so clumsily got up, could never gain currency in the prophet’s own country. But alas! such miracles will never cease. Within three months past, Mormonism has made rapid advances, even in this goodly land, where Providence seems to have shed down his choicest blessings, and where the lights of science and religion have been diffused into every hamlet. Only four miles from where I now write, a band of forty or fifty has sprung up within a few weeks. Immersions of new converts are almost daily taking place, and the work, whatever it be, is still progressing.

Among the peculiarities of their creed are the following:—

1. The book of Mormon is part of Divine revelation, agreeing with, confirming, and being confirmed by the Bible.

2. There is a land of promise, called Sion, west of the Mississippi, where the faithful will all be assembled, when God will destroy the Atlantic and middle states.

3. The miraculous gift of tongues is again restored to the Church, with power to communicate the Holy Ghost by laying on of hands.

4. Most of their leaders are endowed, not only with the gift of prophecy, but have power to work miracles, heal the sick, &c, &c.

It is, indeed, melancholy to reflect, that in the nineteenth century, and in a land made luminous by learning and religion, that so dark a cloud should pass over us; refuting our boast of intellectual and moral improvement, and demonstrating the truth, that nothing short of the goodness and power of God, can save frail man from delusion and destruction.