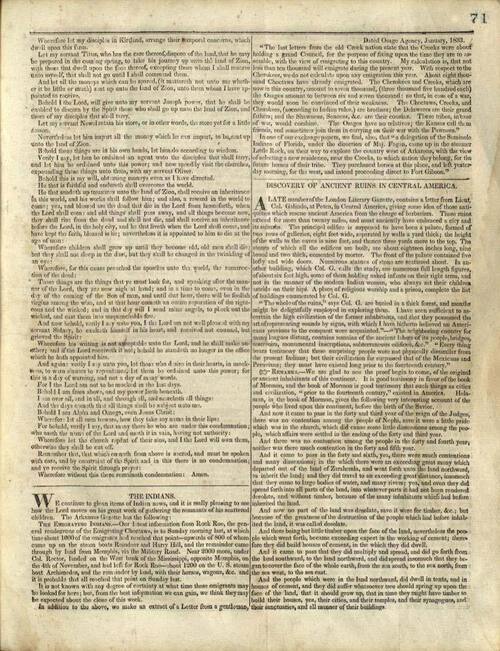 A LATE number of the London Literary Gazette, contains a letter from Lieut. Col. Galindo, at Peten, in Central America, giving some idea of those antiquities which rescue ancient America from the charge of barbarism. These ruins extend for more than twenty miles, and must anciently have embraced a city and its suburbs. The principal edifice is supposed to have been a palace, formed of two rows of galleries, eight feet wide, separated by walls a yard thick; the height of the walls to the eaves is nine feet, and thence three yards more to the top. The stones of which all the edifices are built, are about eighteen inches long, nine broad and two thick, cemented by morter. The front of the palace contained five lofty and wide doors. Numerous statues of stone are scattered about. In another building, which Col. G. calls the study, are numerous full length figures, of about six feet high, some of them holding naked infants on their right arms, and not in the manner of the modern Indian woman, who always set their children astride on their hips. A place of religious worship and a prison, complete the list of buildings enumerated by Col. G.

“The whole of the ruins,” says Col. G. are buried in a thick forest, and months might be delightfully employed in exploring them. I have seen sufficient to ascertain the high civilization of the former inhabitants, and that they possessed the art of representing sounds by signs, with which I have hitherto believed no Americans previous to the conquest were acquainted.”—“The neighboring country for many leagues distant, contains remains of the ancient labors of its people, bridges, reservoirs, monumental inscriptions, subterraneous edifices, &c.” “Every thing bears testimony that these surprising people were not physically dissimilar from the present Indians; but their civilization far surpassed that of the Mexicans and Peruvians; they must have existed long prior to the fourteenth century.”

[excerpt of Helaman 2 from the 1830 edition printed]

In addition to the above, Nephi relates what took place at the crucifixion of the Lord, and should ruins of many cities be discovered, it would be no more than a confirmation of what was once on this land of the Lord. The account of the great destruction at the crucifixion, is confirmed by the appearance of the face of the land now, and the cracks or common seams in the rocks: We give it thus: [excerpt of 3 Nephi 4 from the 1830 edition printed]