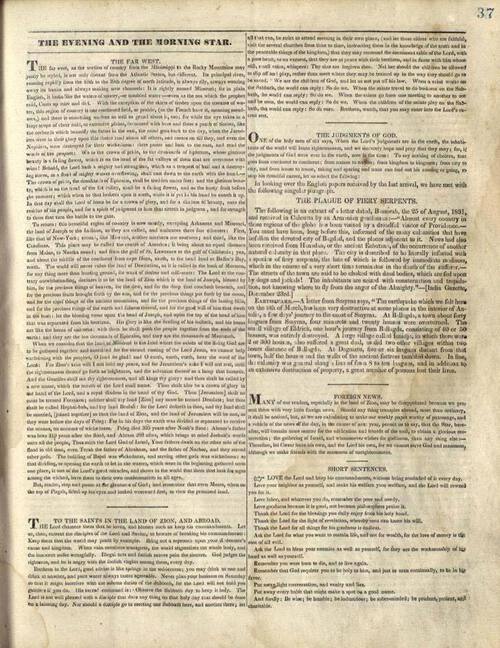 THE FAR WEST THE far west, as the section of country from the Mississippi to the Rocky Mountains may justly be styled, is not only distant from the Atlantic States, but different. Its principal river, running rapidly from the 48th to the 39th degree of north latitude, is always rily, always wearing away its banks and always making new channels: It is rightly named Missouri; for in plain English, it looks like the waters of misery,—or troulded water:—even as the sea which the prophet said, Casts up [?] and dirt. With the exception of the skirts of timber upon the streams of water, this region of country is one continuous field, or prairie, (as the French have it, meaning meadows,) and there is something ancient and grand about it, too; for while the eye takes in a large scope of clear field, or extensive plains, decorated with here and there a patch of timber, like the orchards which beautify the farms in the east, the mind goes back to the day, when the Jaredites were in their glory upon this choice land above all others, and comes on till they, and even the Nephites, were destroyed for their wickedness: Here pause and look to the east, and read the words of the prophet: Wo to the crown of pride, to the drunkards of Ephraim, whose glorious beauty is a fading flower, which is on the head of the fat valleys of them that are overcome with wine! Behold, the Lord hath a might and strong one, which is a tempest of hail and a destroying storm, as a flood of mighty waters overflowing, shall cast down to the earth with the hand.—The crown of pride, the drunkards of Ephraim, shall be trodden under feet: and the glorious beauty, which is on the head of the fat valley, shall be a fading flower, and as the hasty fruit before the summer; which when he that looketh upon it seeth, while it is yet in his hand he eateth it up. In that day shall the Lord of hosts be for a crown of glory, and for a diadem of beauty, unto the residue of his people, and for a spirit of judgment to him that sitteth in judgment, and for strength to those that [?] the battle to the gate.

To return: this beautiful region of country is now mostly, excepting Arkansas and Missouri, the land of Joseph or the Indians, as they are called, and embraces three fine climates: First, like that of New-York; second, like Missouri, neither northern nor southern; and third, like the Carolinas. This place may be called the centre of America: It being about an equal distance from Maine, to Nootka sound; and from the gulf of St. Lawrence to the gulf of California; yes, and about the middle of the continent from cape Horn, south, to the head land at Barra’s Bay, north. The world will never value the land of Desolation, as it is called in the book of Mormon, for any thing more than hunting ground, for want of lumber and mill-seats: The Lord to the contrary notwithstanding, declares it to be the land Zion which is the land of Joseph, blessed by him. for the precious things of heaven, for the dew, and for the deep that coucheth beneath, and for the precious fruits brought forth by the sun, and for the precious things put forth by the moon, and for the chief things of the ancient mountains, and for the precious things of the lasting hills, and for the precious things of the earth and fulness thereof, and for the good will of him that dwells in the truth: let the blessing come upon the head of Joseph, and upon the top of the head of him that was separated from his brethern. His glory is like the firstling of his ballock, and his horns are like the horns of [?]: with them he shall push the people together from the ends of the earth; and they are the ten thousands of Ephraim, and they are the thousands of Mannaseh.

When we consider that the land of Missouri is the land where the saints of the living God are to be gathered together and sanctified for the second coming of the Lord Jesus, we cannot help exclaiming with the prophet, O land be glad! and O earth, earth, earth, hear the word of the Lord: For Zion’s sake will I not hold my peace, and for Jerusalem’s sake I will not rest, until the righteousness thereof go forth as brightness, and the salvation thereof as a lamp that burneth,.

And the Gentiles shall see thy righteousness, and all kings thy glory; and thou shalt be called by a new name, which the mouth of the Lord shall name. Thou shalt also be a crown of glory in the hand of the Lord, and a royal diadem in the hand of thy God. Thou [Jerusalem] shalt no more be termed Forsaken; neither shall thy land [Zion] any more be termed Desolate; but thou shalt be called Hephati-bah, and thy land Beulah: for the Lord deliteth in thee, and thy land shall be married, [joint together] so that the land of Zion, and the land of Jerusalem will one, as they were before the days of Peleg: For in his days the earth was divided or separated to receive the oceans, on account of wickedness. Peleg died 395 years after Noah’s flood: Abram’s father was born 210 years after the flood, and Abram 288 after, which brings to mind Joshua’s words unto all the people, Thus saith the Lord God of Israel, Your fathers dwelt on the other side of the flood in old time, even Terah the father of Abraham, and the father of Nachar, and they served other gods.

The building of Babel was wickedness, and serving other gods was wickedness: so that dividing, or opening the earth to let in the waters, which were in the beginning gathered unto one place, is one of the Lord’s great miracles, and shows to the warful that them that look for signs among the wicked, have them to their own condemnation in all ages.

But, reader, stop and pause at the greatness of God; and remember that even Moses, when on the top of Piegals, lifted up his eyes and looked westward first, to view the promised land.