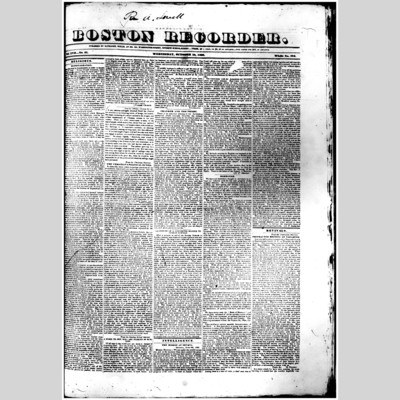 We have not heretofore thought in necessary to occupy our columns with the rise and progress of this singular delusion. But we understand its abettors are sending out their agents, and actually making proselytes in different parts of the country. And therefore we have concluded to give a brief account of the matter. The leaders of the affair claim to have been selected as the medium of a new revelation from heaven. The Lockport, N.Y. Balance, published in the vicinity where it first begun, has given a brief account of its origin from which we learn that The principal personage in this farce, is a certain Jo Smith, an ignorant, and nearly unlettered young man, living at, or near the village of Palmyra; the second, an itinerant pamphlet pedlar, and occasionally, a journeyman printer, name Oliver Cowdry; and third, Martin Harris, a respectable farmer at Palmyra. Others less important actors, have been brought in, as the exigencies of the case required. About two years since, Smith pretended to have been directed, in a dream, or vision, to a certain spot located between the village of Palmyra and Manchester. A slight excavation of the earth, enabled him to arrive at this new revelation, written in mysterious characters, upon gold plates. A pair of spectacles, of strange and peculiar construction were found with the plates, to aid the optics of the prophet. Soon after another very fortunate circumstance occurred. This was the introduction of Oliver Cowdry, to whom, and whom only, was given the ability—with the aid of spectacles—to translate the mysterious characters; all this arranged, but one thing was wanting to promulgate the new revelation— money. Martin Harris was possessed of a valuable farm, acquired by industry and economy; in religion he was a credulous zealot. His credulity and his money, were too conspicuous to be overlooked by the modern apostles. In due time, a divine command came to Harris, through Jo, to devote his property, and all that was his,to the project. Harris’ farm was mortgaged, and the printing of the Bible executed. It is a book of over 300 pages, and is entitled “Book of Mormon.” Of the book, it is only necessary to say that it is a ridiculous imitation of the manner of the Holy Scriptures; and in many instances, a plagiarism upon their language. With all its glaring inconsistencies, it can hardly claim the poor merit of common ingenuity. The projectors of the scheme have attempted to connect a story, historically consistent. The surmise, connected with the destruction of Babylon, is brought to their aid, that a portion of the Jews, wandered to this continent, and by Divine command, deposited the “Book of Mormon,” in the obscure spot, where the lucky stars of Jo Smith directed him.

It is supposed that there were already more than a thousand persons carried away with this strange delusion. Their prophet selected a place in the town of Kirtland, Geneva county, which he called “the promised land.”

Hither the deluded followers of the false prophet, repaired by boat loads along the canal, principally from the counties of Ontario and Wayne. Such as have property, convert it to a common stock, and thus create an inducement which is not overlooked by the idle and vicious.

Families, in some instances, have been divided, and in others, mothers have been obliged to follow their deluded husbands, or adopt the disagreeable alternative, of parting with them and their children.

We have never seen the “Book of Mormon,” and are not fully informed of all the peculiar tenets of the sect. The most important or cardinal doctrine is implicit faith in their leaders, Smith and Cowdry. The following statement is from the Painesville, Ohio, Gazette.

They profess to receive sensible demonstrations of the Diety. A few days since, a young man gave information to some of his brethren that he was about to receive a mesage from heaven. They repaired to the spot designated, and there, as they solemnly assert, a letter descended from the skies, and fell into the hands of the young man. The purport was to strengthen his faith and inform him that he would soon be called to the ministry. They declare their solemn belief that this letter was written in heaven by the finger of God. The style of writing was the round Italian, and the letters of gold. They favored youth immediately attempted to copy the communication, but as fast as he wrote the letters of the original disappeared.

It is alleged, that some of them have received white stones, promised in the second chapter of the Revelation. Such of them as have “the spirit,” will declare that they see a white stone moving about the upper part of the room, and will jump and spring for it, until one more fortunate than the others catches it, but he alone can see it. Others, however, profess to hear it roll across the floor. These two stories and others of a similar character, are told by them with solemn asserverations of their truth.

Among them is a man of color, a chief man who is sometimes seized with strong vagaries and odd conceits. The other day he is said to have jumped twenty-five feet down a wash bank into a tree top without injury. He sometimes fancies he can fly.

In Chardon,one man has torn away all the partitions of the lower part of a good two story dwelling house. Here a large number live together. The food consisting in meat and vegetables, it is said, is placed on the table in a large pan, which is the whole table furniture. From this every inmate takes a piece of meat and a potato in his hand, and devours them as he walks about the room. As to matters of apparel, and indeed other things, when any one wants what he has not, he takes it any where in the family where he can find it unoccupied. All things are common.

They are now extending their operation into different parts of the country. In Albany, we learn that they have made several proselytes, who have occasioned much trouble to the churches, with which some of them had been connected. We have before us a letter from one of them, dated in Bradford county, Pa. August, 1832. The writer says, Sir—The prayer of my heart to God is, that you may believe the Scriptures of the Old and New Testament, if you do not believe what I write. But I now tell you what has taken place since I arrived here. On the 30th of July, there was an appointment for preaching at 4 o’clock P.M. by a Methodist. We went to the place but he did not attend; and we occupied the time by prayer and exhortation. The company were Methodists, and a class of people called Mormonites. After the meeting was over,notice was given that there would be a meeting in the evening at my brother’s house. Some of the Mormonites, together with others, collected, and the meeting commenced and went on the same as your meetings do, until about 10 o’clock, when I should say by what I saw and felt, of a truth the Lord was present with us. The spirit seemed to rest and clothe upon a Mrs. Conkling, and I thought, and think yet, that I heard a few words of a language that I could not understand. You must know that my mind was on the look out. And not long after, perhaps forty-five minutes, she broke forth in prayer to God, in a language that I could not understand, and continued two or three minutes, and then in our language, she gave an interpretation of what she had said. Then she broke out again, in the same language, and was more lengthy than the first time. This last prayer or exhortation she did not interpret. I am credibly informed that they have these gifts, and all the gifts of the gospel. I trust that I shall see and hear more yet; when I do I will write. I leave all to God, whether you believe or disbelieve.

More recently their emissaries have showed themselves in Boston, where the delusion has seized several respectable citizens, some of whom were considered worthy members of different churches. The Rev. J. V. Himes makes the following statement.

However strange to relate, about fifteen persons in this city have been led away by these false doctrines, have been baptized, and joined the Mormon church. And some of these persons have set out for “the promised land, the place of refuge for the house of Israel and for all the Gentile world, who will take warning and flee thither for safety.” Two individuals who have gone, are defenceless females, they had acquired by their hard industry $2,300, one having $1,500 the other $800 which they had given up to go into the general stock. One of these females was in a consumption, and her friends thought she would not live to reach her destined place.

Her afflicted sister told me that if she had been buried here before she had been led away by these errors, and had satisfactory evidence that she was prepared to die, her grief would have been far less than it is now. The remaining persons who were baptized, and joined the church, and contemplate going to the West, possess between 3,000 and $4,000, which they also are going to put with the general fund, and which they can never draw out again, should they get sick of Mormonism, and wish to return to their friends.

Thus are our friends swindled out of their property and drawn from their comfortable homes to endure the perils of a journey of about two thousand miles, by these ignorant fanatics; and when arrived at their earthly paradise, to become the miserable dupes of these temporal and spiritual lords. [ N. Y. Evangelist.