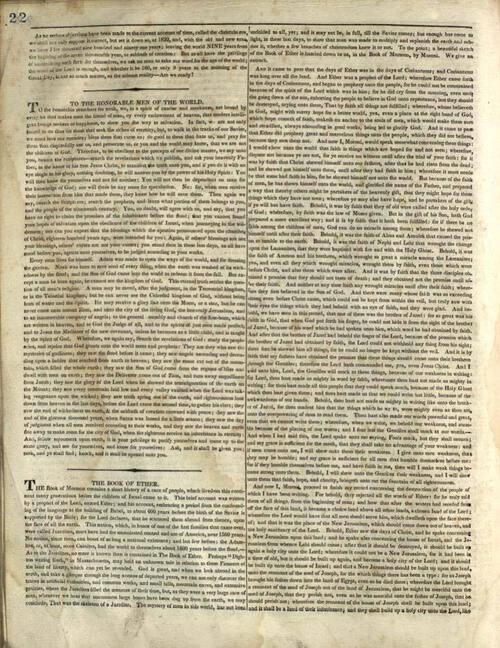 THE BOOK OF ETHER THE Book of Mormon contains a short history of a race of people, which lived on this continent many generations before the children of Israel came to it. This brief account was written by a prophet of the Lord named Ether; and his account, embracing a period from the confounding of the language at the building of Babel, to about 600 years before the birth of the Savior is supported by the Bible; for the Lord declares, that he scattered them abroad from thence, upon the face of all the earth. This nation, which, in honor of one of the first families that came over, were called Jaredites, must have had the unmolested control and use of America, near 1500 years. No nation, since then, can boast of so long a national existence; and but few before: the Adamites, or, at least, some Cainites, had the world to themselves about 1600 years before the flood.—As to the Jaredites, no more is known than is contained in The Book of Ether.

Perhaps “Dighton writing Rock,” in Massachusetts, may hold an unknown tale in relation to these Pioneers of the land of liberty, which can yet be revealed. God is great, and when we look abroad in the earth, and take a glimpse through the long avenue of departed years, we can not only discover the traces in artificial curiosities, and common works, and small hills, mountain caves, and extensive prairies, where the Jaredites filled the measure of their time, but, as they were a very large race of men, whenever we hear that uncommon large bones have been dug up from the earth, we may conclude, That was the skeleton of a Jaredite. The mystery of man in this world, has not been unfolded to all, yet; and it may not be, in full, till the Savior comes; but enough has come to light, in these last days, to show that man was made to multiply and replenish the earth and subdue it, whether a few branches of christendom knew it or not. To the point: a beautiful sketch of the Book of Ether is handed down to us, in the Book of Mormon, by Moroni. We give an extract. . . .