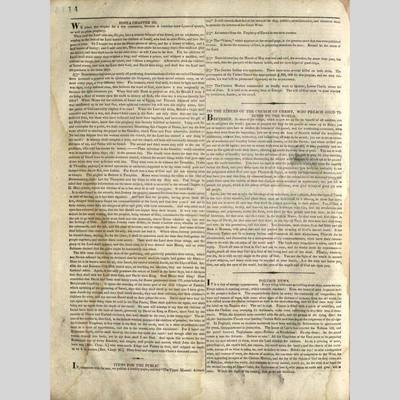 WE select this chapter for a few comments, because it contains some figures of speech, as well as plain prophecy.

Notwithstanding some, or nearly all professing denominations of what are called Christians, have invented a general rule to spiritualize the Scripture, yet these sacred records carry, on almost every page, a very different idea: For instance, when God said, let there be light and there was light, every rational man, that believes the word of God, must know it was temporally so, because the light continues yet. When God told Noah to prepare an Ark, for Behold I even I do bring a flood of waters upon the earth to destroy all flesh, who dare say it was not literally fulfilled? When Moses led the children of Israel out of Egypt, and Pharaoh followed after and was swallowed up in the Red Sea, what spiritual construction will turn this mighty scene, from the power of God naturally displayed to man? When the Lord told Ahaz, Behold a virgin shall conceive and bear a son, and Jesus Christ came in the flesh: not only them that saw him and believed then, but those who have believed and have been baptized, and have received the gift of the Holy Ghost since, know that this prophecy was literally fulfilled as foretold. Using such literal examples far a guide, we shall commence literalizing this Chapter of Hosea, and say the first verse alluded to sending the gospel to the Gentiles, which Peter and Paul afterwards fulfilled.—No one can dispute that the woman means the church, for the Lord has created a new thing in the earth: A woman shall compass a man, and the church of Christ will eventually triumph over the man of sin, and Satan will be bound. The second and third verses may refer to the son of perdition, who sold his master for money.—Then salvation to the Gentiles: which salvation was to continue many days, viz: to the present day. The fourth verse shows the time that the children of Israel were to remain scattered abroad, without the sacred things which God gave unto them when they were in favour with him. They were even to do without the Teraphim, [Urim & Thummim, perhaps] or sacred spectacles or declarers; supposed to be the same called gods and images when Jacob fled, rom Laban. For Jacob was a man of God and did not worship idols or images. The original in Hebrew is Teraphim. Moses when blessing the tribes in the 33rd of Deuteronomy, says: Let thy Thummim and thy Urim be with thy Holy one. This brings to mind that important information on the same subject, which is recorded in the second Chapter of II Maccabees, which the wisdom of man has seen fit to call Apocrypha. It reads thus:

It is also found in the records, that Jeremy the prophet commanded them that were carried away to take of the fire, as it has been signified: And how that the prophet, having given them the law, charged them not to forget the commandments of the Lord, and that they should not err in their minds, when they see images of silver and gold, with their ornaments. And with other such speeches exhorted he them, that the law should not depart from their hearts. It was also contained in the same writing, that the prophet, being warned of God, commanded the tabernacle and the ark to go with him, as he went forth into the mountain, where Moses climbed up, and saw the heritage of God. And when Jeremy came thither, he found a hollow cave, wherein he laid the tabernacle, and the ark, and the altar of incense, and so stopped the door. And some of those that followed him came to mark the way, but could not find it. Which when Jeremy perceived, he blamed them, saying, As for the place, it shall be unknown until the time that God gather his people together, and receive them unto mercy. Then shall the Lord shew these things, and the glory of the Lord shall appear and the cloud also, as it was shewed unto Moses, and as when Solomon desired that the place might be honourably sanctified.

The fifth verse directs to the time of the gathering, and positively promises their return, which our Savior referred to, when he declared that he would send his angels and gather his Elect.—Here let it be known once for all, that Israel, the twelve tribes of Jacob, are the Elect of God. Isa. 45th 4th and Romans 11th 28th which says, as touching the election, they are beloved for the fathers’ sakes. Again, it not only promises the return of Israel in the latter days, but it declares that they shall seek the Lord their God, and David their King. Seek David their King!

Here remember that David had been dead many years, for Hosea prophesied about 175 years before the Babylonish Captivity: It opens the meaning of the latter part of the 37th Chapter of Ezekiel, which speaking of the gathering of Israel, says that they shall dwell in the land that I have given unto Jacob my servant, and they shall dwell therein, they and their children, and their children’s children for ever, and my servant David shall be their prince for ever. David must have had his eye upon the same thing when he said in the 71st Psalm, Thou shalt quicken me again, and shalt bring me up again from the depth of the earth. No man will attempt to say that the children of Israel have lived in the land of Jacob, governed by David as King or Prince, since God by the mouths of Hosea and Ezekiel declared, that such should be the case, in the latter days! The secret of the matter is, that God, in his infinite wisdom prepared the children of promise, the heirs of the Celestial Kingdom, to live twice in the flesh on the earth, once in a state of probation; and once in a state of approbation, and this is the reason why Job exclaimed: For I know my Redeemer liveth, and he shall stand at the latter day upon the earth: and though after my skin worms destroy this body, yet in my flesh shall I see God. And again this accounts for the Redeemed out of every Kindred, and tongue, and people and nation, which John the Revelator saw [Rev. Chap. 5.] who were made Kings and Priests to God, and reigned on earth or as it is written [Rev. Chapt. 20.] They lived and reigned with Christ a thousand years.