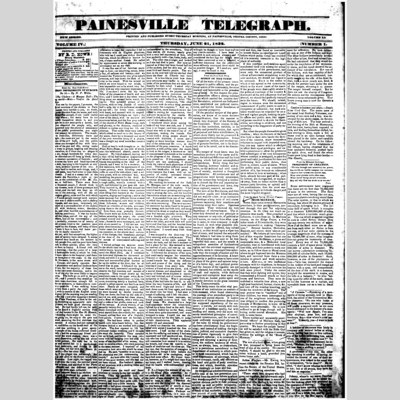 From the Rock Spring (Illinois) Pioneer.

Some days since several Mormonite preachers, in their perigrinations, passed through this and the adjoining counties. In St. Clair not much impression was made. One preached in Lebanon, 4 miles from us. In Madison county, on the Ridge Praire, a few miles south of Edwardsville, they were more successful in making “Impressions.” Several families, Methodist, Baptists, and others, were ‘almost persuaded.’ We believe all have been cured of this singular fanaticism but one family. A Mr. McMahan, a pious and respectable man, & a Methodist local preacher, was so bewildered with their new bible, and their power to work miracles, as to follow them to Shoal creek where he got baptised into the Mormon faith, and received from them a commission to preach and work miracles in turn. After one or two ineffectual attempts with his neighbors, he became entirely deranged in which exercise his wife soon joined. Under the notion that they were fighting evil spirits, they commenced a frenzied attack on their house and furniture. They soon demolished a valuable time piece, a new high post beadstead, bureau, chairs, &c. and tore off the weather boarding, and broke the windows of the house. The next protect was to “sacrifice” one of their children, but were interrupted by one of the neighbors interfering, who was obliged to confine this promising disciple of Mormonism in irons till he become more peaceable. He is now suffered to go at large, though still laboring under mental alienation. His wife is some better.

These sudden and apparently providential ‘effects’ of Mormon faith, has put a stop to further proselyting in this quarter. We hope the people hereafter will be satisfied with the Bible God has given us, and the religion it reveals, without the addition of the “Book of Mormon.”