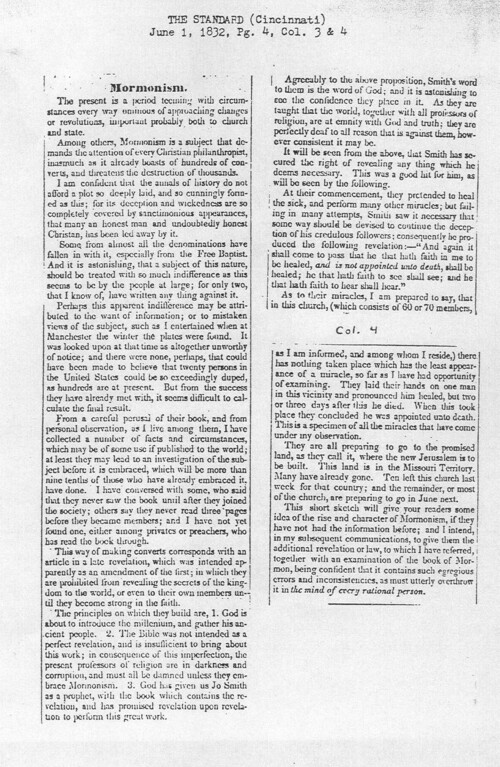 The present is a period teeming with circumstances every way ominous of approaching changes or revolutions, important probably both to church and state.

Among others, Mormonism is a subject that demands the attention of every Christian philanthropist, inasmuch as it already boasts of hundreds of converts, and threatens the destruction of thousands.

I am confident that the annals of history do not afford a plot so deeply laid, and so cunningly formed as this; for its deception and wickedness are so completely covered by sanctimonious appearances, that many an honest man and undoubtedly honest Christan, has been led away by it.

Some from almost all the denominations have fallen in with it, especially from the Free Baptist. And it is astonishing, that a subject of this nature, should be treated with so much indifference as this that I know of, have written any things against it.

Perhaps this apparent indifference may be attributed to the want of information; or to mistaken views of the subject, such as I entertained when at Manchester the winter the plates were found. It was looked upon at the time as altogether unworthy of notice; and there were none, perhaps, that could have been made to believe that twenty persons in the United States could be so exceedingly duped, as hundreds are at present. But from the success they have already met with, it seems difficult to calculate the final result.

From a careful perusal of their book, and from personal observation, as I live among them, I have collected a number of facts and circumstances, which may be of some use if published to the world; at least they may lead to an investigation of the subject before it is embraces, which will be more than nine tenths of those who have already embraced it, have done. I have conversed with some, who said that they never saw the book until after they joined the society; others say they never read three pages before they became members; and I have not yet found one, either among privates or preachers, who has read the book through.

This way of making converts corresponds with an article in a late revelation, which was intended apparently as an amendment of the first; in which they are prohibited from revealing the secrets of the kingdom to the world, or even to their own members until they become strong in the faith.

The principles on which they build are, 1. God is about to introduce the millenium, and gather his ancient people. 2. The Bible was not intended as a perfect revelation, and is insufficient to bring about this work; in consequence of this imperfection, the present professors of religion are in darkness and corruption, and must all be damned unless they embrace Mormonism. 3. God has given us Jo Smith as a prophet, with the book which contains the revelation, and has promised revelation upon revelation to perform this great work.

Agreeably to the above proposition, Smith’s word to them is the word of God; and it is astonishing to see the confidence they place in it. As they are taught that the world, together with all professors of religion, are emnity with God and truth; they are perfectly deaf to all reason that is against them, however consistent it may be.

It will be seen from the above, that Smith has secured the right of revealing any thing which he deems necessary. This was a good hit for him, as will be seen by the following.

At their commencement, they pretended to heal the sick, and perform many other miracles; but failing in many attempts, Smith saw it necessary that some way should be devised to continue the deception of his credulous followers; consequently he produced the following revelation:—“And again it shall come to pass that he that hath faith in me to be healed, and is not appointed unto death, shall be healed; he that hath faith to see shall see; and he that hath faith to hear shall hear.”

As to their miracles, I am prepared to say, that in this church, (which consists of 60 or 70 members, as I am informed, and among whom I reside,) there has nothing taken place which has the least appearance of a miracle, so far as I have had opportunity of examining. They laid their hands on one man in this vicinity and pronounced him healed, but two of three days after this he died. When this took place they concluded he was appointed unto death. This is a specimen of all the miracles that have come under my observation.

They are all preparing to go to the promised lands, as they call it, where the new Jerusalem is to be built. This land is in the Missouri Territory. Many have already gone. Ten left this church last week for that country; and the remainder, or most of the church, are preparing to go in June next.

This short sketch will give your readers some idea of the rise and character of Mormonism, if they have not had the information before; and I intend, in my subsequent communications, to give them the additional revelation or law, to which I have referred, together with an examination of the book of Mormon, being confident that it contains such egregious errors and inconsistencies, as must utterly overthrow it in the mind of every rational person.