The Orators of Mormon 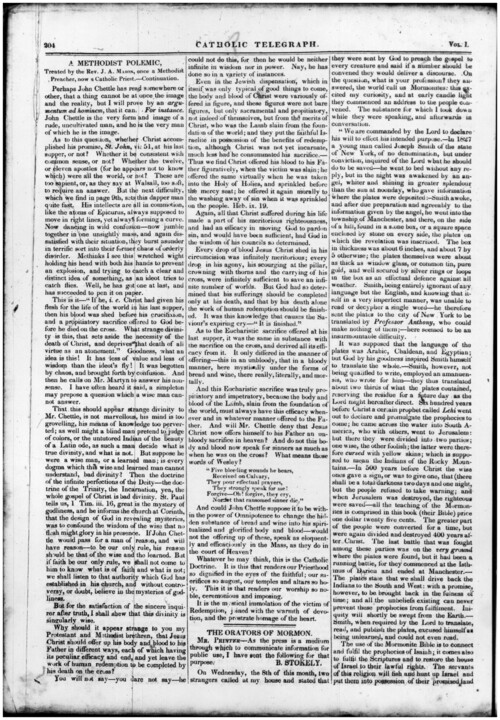 THE ORATORS OF MORMON.

MR. PRINTER—As the press is a medium through which to communicate information for public use, I have sent the following for that purpose.

B. STOKELY On Wednesday, the 8th of this month, two strangers called at my house and stated that they were sent by God to preach the gospel to every creature and said if a number should be convened they would deliver a discourse. On the question, what is your profession? they answered, the world call us Mormonites: this excited my curiosity, and at early candle light they commenced an address to the people convened. The substance for which I took down while they were speaking, and afterwards in conversation.

“We are commanded by the Lord to declare his will to effect his intended purpose.—In 1827 a young man called Joseph Smith of the state of New York, of no denomination, but under conviction, inquired of the Lord what he should do to be saved—he went to bed without any reply, but in the night was awakened by an angel, whiter and shining in greater splendour than the sun at noonday, who gave information where the plates were deposited:—Smith awoke, and after due preparation and agreeably to the information given by the angel, he went into the township of Manchester, and there, on the side of a hill, found in a stone box, or a square space enclosed by stone on every side, the plates on which the revelation was inscribed. The box in thickness was about 6 inches, and about 7 by 5 otherwise; the plates themselves were about as thick as window glass, or common tin, pure gold, and well secured by silver rings or loops in the box as an effectual defence against all weather. Smith, being entirely ignorant of any language but the English, and knowing that itself in a very imperfect manner, was unable to read or decypher a single word—he therefore sent the plates to the city of New York to be translated by Professor Anthony, who could make nothing of them;—here seemed to be an insurmountable difficulty.

It was supposed that the language of the plates was Arabic, Chaldean, and Egyptian; but God by his goodness inspired Smith himself to translate the whole.—Smith, however, not being qualified to write, employed an amanuensis, who wrote for him—they thus translated about two thirds of what the plates contained, reserving the residue for a future day as the Lord might hereafter direct. Six hundred years before Christ a certain prophet called Lehi went out to declare and promulgate the prophecies to come; he came across the water into South America, who with others, went to Jerusalem: but there they were divided into two parties; one wise, the other foolish; the latter were therefore cursed with yellow skins; which is supposed to mean the Indians of the Rocky Mountains.—In 500 years before Christ the wise ones gave a sign, or was to give one, that (there shall be a total darkness two days and one night, but the people refused to take warning; and when Jerusalem was destroyed, the righteous were saved—all the teaching of the Mormonites is comprised in this book (their Bible) price one dollar twenty five cents. The greater part of the people were converted for a time, but were again divided and destroyed 400 years after Christ. The last battle that was fought among these parties was on the very ground where the plates were found, but it had been a running battle, for they commenced at the Isthmus of Darien and ended at Manchester.—The plates state that we shall drive back the Indians to the South and West: with a promise, however, to be brought back in the fulness of time; and all the unbeliefs existing can never prevent these prophecies from fulfilment. Iniquity will shortly be swept from the Earth.—Smith, when required by the Lord to translate, read, and publish the plates, excused himself as being unlearned, and could not even read.

The use of the Mormonite Bible is to connect and fulfil the prophecies of Isaiah; it comes also to fulfil the Scriptures and to restore the house of Israel to their lawful rights. The servants of this religion will fish and hunt up Israel and put them into possession of their promised land (The speaker) himself is specially commanded to go forth and warn the people to flee from the wrath to come—were it not for this injunction he would rather work at the hardest labor.—They have gone forth like the disciples of old, without money or scrip, taking no thought what they shall say—and when they are not well received, shake off the dust of their feet as a testimony against the people who thus reject the Holy Spirit. He has left Father, Mother, Brothers and Sisters, the farm and neighborhood of friends, to declare the will of God, and the revelation of John who saw the angel flying through Heaven—An angel brought the Mormonite Bible and laid it before him (the speaker;) he therefore knows these things to be true. Being sent to call on all to repent—he has come to fulfil the commands of Heaven: he has cleared his skirts of our blood.”

I have made some remarks, and given a few particular traits from the Mormon bible “Christ appeared to 3000 and they all put their hands into his side and believed.” (What a host of Thomases.) The books of this Bible are in number 14, under the following names, viz; 1 Nephi, 2 Nephi, Books of Jacob, Enos, Jarem, Omni, Mormon, Mesiah, Almo, Nephi, jr., Mormon, (again,) Ether, and Morni—translated by Joseph Smith, junior, by pure inspiration—certified to be true by Oliver Cowdry, David Whitmer and Martin Harris, who declare, “That an angel of God came from heaven and brought the plates and laid them before your eyes and we beheld and saw the plates.”—Another certificate is added, signed by eight more, viz: Christian Whitmer, Jacob Whitmer, Peter Whitmer, jr, John Whitmer, Hiram Page, Joseph Smith, senr. Hiram Smith, and Saml H. Smith, who declare that J Smith, jr., laid the plates before them, to the truth of which they certify.—One of the young men called himself Lyman Johnston, from Portage County, Ohio. The other was called Arson Pratt; no fixed place of abode. They were going North East, intending to preach the gospel to every kindred, tongue and nation:—They appeared to have very little learning, to be sincere in all they said. They had good manners—had been well raised—were decent and unassuming in every thing I saw, or heard them say. They said what I could hardly believe; “that John the Revelator was yet alive and about in the world.” I thought for certain he had been dead for more than fifty years, and observed that I should be glad to see the old man; to which they made no reply—Arson Pratt repeating his reluctance to an initerant life and (but for the mandate of God) he had rather work at any thing else however hard. I observed perhaps on application he could compromise with Providence get another in his place, and he himself locate—he made no reply.