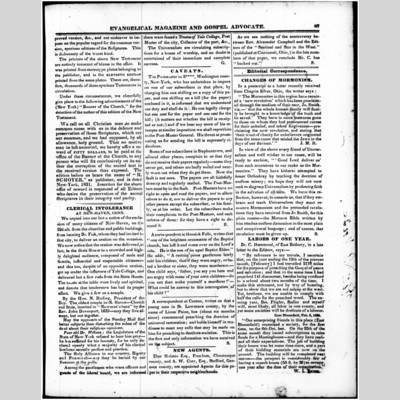 In a postscript to a letter recently received from Chagrin River, Ohio, the writer says:

“The Mormonites in this region have received a ‘new revelation’ which has been proclaimed through the medium of their seer, Jo Smith. viz.—‘that the whole human family will finally be brought to a knowledge of the truth and be saved.’ They have in some instances gone to those on whom they had pronounced curses for their unbelief, and asked forgiveness— proclaiming the new revelation, and stating that ‘their want of charity for unbelievers originated from the same cause that misled the Jews in the days of our Saviour.’ ”

In view of the above every friend of Universalism and well wisher to our cause, will be ready to exclaim, “ ‘Good Lord deliver us’ from such accessions to our ranks as the Mormonites.” They have hitherto attempted to honor Orhodoxy by teaching the doctrine of endless misery; we hope they will not now seek to disgrace Universalism by professing faith in the salvation of all men. We have this reflection, however, to console us, that if they embrace and teach Universalism they must renounce Mormonism and the pretended revelations they have received from Jo Smith, for this plain reason—the Mormon Bible written by him teaches endless damnation in the most plain and unequivocal language; and of course, that revelation must be given up.