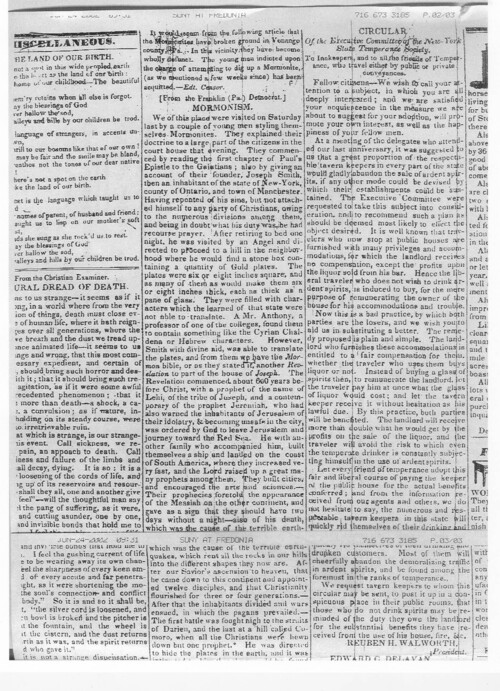 It would seem from the following article that the Mormonites have broken ground in Venango county, Pa. In this vicinity they have become wholly defunct. The young man indicted upon the charge of attempting to dig up a Mormonite, (as we mentioned a few weeks since) has been acquitted.— Edt. Censor.

[From the Franklin (Pa.) Democrat.]

We of this place were visited on Saturday last by a couple of young men styling themselves Mormonites. They explained their doctrine to a large part of the citizens in the court house that evening. They commenced by reading the first chapter of Paul’s Epistle to the Galatians; also by giving an account of their founder, Joseph Smith, then an inhabitant of the state of New-York, county of Ontario, and town of Manchester. Having repented of his sins, but not attached himself to any party of Christians, owing to the numerous divisions among them, and being in doubt what his duty was, he had recourse prayer. After retiring to bed one night, he was visited by an Angel and directed to proceed to a hill in the neighborhood where he would find a stone box containing a quantity of Gold plates. The plates were six or eight inches square, and as many of them as would make them six or eight inches thick, each as thick as a pane of glass. They were filled with characters which the learned of that state were not able to translate.

A Mr. Anthony, a professor of one of the colleges, found them to contain something like the Cyrian Chaldena, or Hebrew characters. However, Smith with divine aid, was able to translate the plates, and from them we have the Mormon bible, or as they stated it, another Revelation to part of the house of Joseph. The Revelation commenced about 600 years before Christ, with a prophet of the name of Lehi, of the tribe of Joseph, and a contemporary of the prophet Jeremiah, who had also warned the inhabitants of Jerusalem of their idolatry, & becoming unsafe in the city, was ordered by God to leave Jerusalem and journey toward the Red Sea. He with another family who accompanied him, built themselves a ship and landed on the coast of South America, where they increased very fast, and the Lord raised up a great many prophets among them. They built cities, and encouraged the arts and sciences.—Their prophecies foretold the appearance of the Messiah on the other continent, and gave as a sign that they should have two days without a night also of his death, which was the cause of the terrible earthquakes, which rent all the rocks in our hills into the different shapes they now are. After our Savior’s ascension to heaven, that he came down to this continent and appointed twelve disciples, and that Christianity flourished for three or four generations.—After that the inhabitants divided and wars ensued, in which the pagans prevailed.—The first battle was fought nigh to the straits of Darien, and the last at a hill called Comoro, when all the Christians were hewn down but one prophet.* He was directed to hide the plates in the earth, and it was intimated to him that they would be found by a gentile people. The last entry on the plates is 420 years after the commencement of the Christian era.

The whole history contains their account of 1020 years. The balance of their discourse was on repentance, and quotations from our prophets to prove their doctrine, and the return of the Jews

* This prophet they say was Mormon. to Palestine, which was to be done by the gentile nations, accompanied with power from above, far superior to that which brought their fathers out of Egypt. They insisted that our Savior would shortly appear, and that there were some present who would see him on the earth—that they knew it—that they were not deceiving their hearers; that it was all true. They had one of their bibles with them, which was seen by some of our citizens who visited them.

Mr. Editor—I have compiled the foregoing from memory. If you think it worth publishing, it will probably give some outline of the doctrine of this new sect.