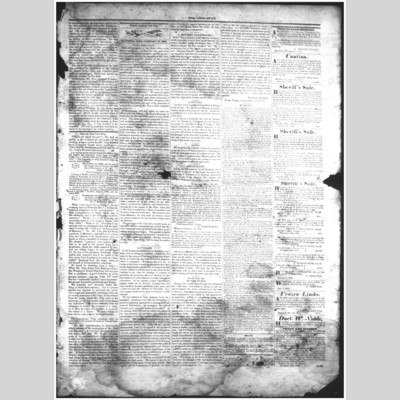 Having a few weeks since, through the medium of the “Ohio Star,” invited SIMONS RIDER to meet me and investigate the divine authenticity of the book of Mormon, with which he pretended to have an intimate acquaintance, and which he had pronounced an imposition; willing to acknowledge every man to be honest, and sincere, till I have evidence to the contrary, so I was willing to receive Simons Rider in the character which he claimed; but how far myself or the public are bound to receive him as an honest man, I leave his letter written in reply to my request to testify. If Simons Rider is afraid to have his assertions put to the test, why make them? If he is certain (as he pretends) that the book of Mormon is a “base imposition,” why be afraid to come forward and prove it? I say—where is honesty?—where is candor? surely, not in the heart of such a man. Am I to blame for drawing this conclusion? surely not, for he has forced it upon me.

He presented himself before the public as an accuser; he has been called upon before the same public, to support his accusations; and does he come forward and do it? nay, but seeks to hide himself behind a battery of reproach, and abuse, and low insinuation. He would fain make the public believe in meeting me to investigate the truth of his accusations, that all the evils of Pandora’s box would be poured out on his head. The words of the Savior of the world are verified in this instance—“He that doeth evil hateth the light, neither cometh to the light, lest his deeds should be made manifest,” &c.

Simons, like the worker of iniquity, has sought a hiding place. Let the public remember, when he goes forth again to proclaim his anathemas against the book of Mormon, that he has been invited upon honorable principles to investigate its merits, and dare not do it. This is a matter of his own bringing forth; he is at liberty to believe as he pleases, and I am the last one who would treat him unbecomingly on account of it; but Simons was not contented with this privilege; but sought to raise himself at the expense of others, (as his conduct manifests to every man of candor,) he stept forward, and made an attempt to go alone, and thought at the first step to put his heel upon his neighbor’s neck; but I have seen proper to set him back again; and let him now seek some one to help him until he learns to ponder the path of his feet.

He who is afraid to have his assertions put to the test, let him cease to make them. He who dares not defend his charges gratuitously made against his neighbor’s religion when called upon, will do well to set himself down in his own house, and tell the people, if you will bring your preaching to my house I will do it for you—I will investigate privately, but do not bring me before the public. So is Simon’s conduct; and there I leave him, for the present.