The Life of David Marks 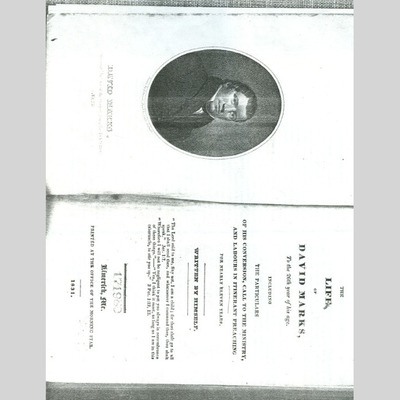 Marks, David. The Life of David Marks, To the 26th year of his age. Including the Particulars of His Conversion, Call to the Ministry, and Labours in Itinerant Preaching For Nearly Eleven Years, 340–42 . Limerick, ME: Printed at the Office of the Morning Star,1831.

During the week following, I journeyed about one hundred and fifty miles, and suffered much from a tedious storm. Sabbath, March 28, I preached twice to a small assembly in Geneva.

Next day, we attended a meeting in Fayette, and tarried at the house of Mr. Whitmer. Here we saw two or three of his sons, and others to the number of eight, who said they were witnesses of a certain book just published, called the “Golden Bible,” or “Book of Mormon.” They affirmed, that an angel had showed them certain plates of metal, having the appearance of gold, that were dug out of the ground by one Joseph Smith; that on these plates was written a history of the ten tribes of Israel which were lost, and revelations to different prophets that arose among them.

They stated the writing could be read by no person, except by the said Smith; and, that the Lord had inspired him to translate and publish the book,—that none, but twelve chosen witnesses, had been allowed to see these plates, and that now they were “hid up unto the Lord.” They further stated, that twelve apostles were to be appointed, who would soon confirm their mission by miracles—and, that if any one read their bible and did not believe, they would be given up and lost for ever. These eight, we understood, were in company with Smith and three others. A copy right was secured by Smith in his own name. The book contains about six [340] hundred octavo pages of small print. Five thousand copies were published—and they said the angel told Smith to sell the book at a price which was one dollar and eight cents per copy more than the cost, that they “might have the temporal profit, as well as the spiritual.”

When I was in Ohio, I had quite a curiosity to know the origin of the numerous mounds and remains of ancient fortifications that abound in that section of the country; but could not find that any thing satisfactory was known on the subject. Having been told, that the ‘ Book of Mormon’ gave a history of them, and of their authors, some desire was created in my mind to see the book, that I might learn the above particulars. I wished to read it, but could not, in good conscience, purchase a copy, lest I should support a deception; so they lent me one, and I read two hundred and fifty pages; but was greatly disappointed in the style and interest of the work.

For, so far from approaching the sublimity of the inspired writers, they would bear no comparison with the Apocrypha, or the Alcoran. Indeed the style is so insipid, and the work so filled with manifest imposture, that I could feel no interest in a further perusal. It contained several extracts from the Scriptures; and, with a little variation, Christ’s sermon on the mount.

From all the circumstances, I thought it probably had been written originally by an infidel, to see how much he could impose on the credulity of men, and to get money. Yet, I expected they would make converts; for there are many people who are fond of new things; and there is scarcely any system so absurd as to obtain no advocates. Shortly after this, I understood that one of the witnesses baptized Smith, and then Smith baptized others. If one believed the book, he was considered a fit subject for baptism.

On reviewing this pretended revelation, I was forcibly struck with the contrast between the introduction for the gospel of Christ, and that of the ‘Book of Mormon.’ The former came down from heaven; the latter is said to have been dug out of the earth. The gospel was first preached openly, with power, in the [341] sight of all men, and written afterwards; the ‘Book of Mormon’ was first written, secretly, and out of sight from all men, except twelve, and preached afterwards. None of the works of Christ and the apostles were in secret, but open to the examination of all; the origin of this book is hid in the dark. The gospel of Christ was confirmed by unnumbered miracles, wrought in the most public manner; the ‘Book of Mormon’ is not confirmed by any miracles, but its authority rests on the testimony of twelve men whom we do not know. The gospel of Christ presented to its apostles no temporal gain, but the loss of all things; the ‘Book of Mormon’ has a copy right secured, that its witnesses may “have the temporal profit”—so men cannot tell, that this “profit” is not what induces them to bear such witness. The gospel is confirmed by a thousand prophecies that preceded, and pointed to it, and are still daily fulfilling; but we know not that any prophecy pointed to the ‘Book of Mormon.’

The Bible is a book of perfect harmony, and unrivalled sublimity; the ‘Book of Mormon’ is full of absurdity, and too dull to charm the soul.