The Herald of Truth 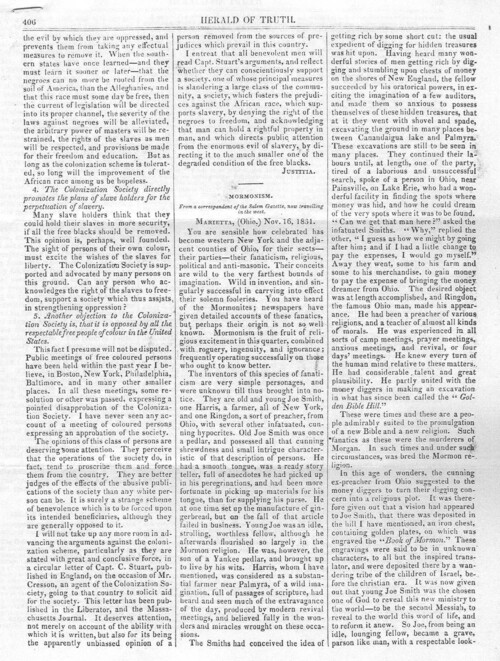 From a correspondent of the Salem Gazette, now travelling in the west.

You are sensible how celebrated has become western New-York and the adjacent counties of Ohio, for their sects—their parties—their fanaticism, religious, political and anti-masonic. Their conceits are wild to the very farthest bounds of imagination. Wild in invention, and singularly successful in carrying into effect their solemn fooleries. You have heard of the Mormonites; newspapers have given detailed accounts of those fanatics, but perhaps their origin is not so well known. Mormonism is the fruit of religious excitement in this quarter, combined with roguery, ingenuity and ignorance; frequently operating successfully on those who ought to know better.

The inventors of these species of fanaticism are very simple personages, and were unknown till thus brought into notice. They are old and young Joe Smith, one Harris, a farmer of New-York, and one Ringdon, a sort of preacher, from Ohio, with several other infatuated, cunning hypocrites. Old Joe Smith was once a pedlar, and possessed all that cunning shrewdness and small intrigue characteristic of that description of persons. He had a smooth tongue, was a ready story-teller, full of anecdotes he had picked up his perigrinations, and had been more fortunate in picking up materials for his tongue than for supplying his purse. He at one time set up the manufacture of gingerbread, but on the fall of the article failed in business. Young Joe was an idle, strolling, worthless fellow, although he afterwards flourished so largely in the Mormon religion. He was, however, the son of a Yankee pedlar, and brought up to live by his wits. Harris, whom I have mentioned, was considered as a substantial farmer near Palmyra, of a wild imagination, full of passages of scripture, had heard and seen much of the extravagance of the day produced by modern revival meetings, and believed fully in the wonders and miracles wrought on these occasions.

The Smiths had conceived of the idea of getting rich by some short cut; the usual expedient of digging for hidden treasures was hit upon. Having heard many wonderful stories of men getting rich by digging and stumbling upon chests of money on the shores of New England, the fellow succeeded by his oratorical powers, in exciting the imagination of a few auditors, and made them so anxious to possess themselves of those hidden treasures, that at it they went with shovel and spade, excavating the ground in many places between Canandaigua Lake and Palmyra. These excavations are still to be seen in many places. They continued their labors until, at length, one of the party, tired of a laborious and unsuccessful search, spoke of a person in Ohio near Painesville, on Lake Erie, who had a wonderful facility in finding the spots where the money was hid, and how he could dream of the very spots where it was to be found. “Can we get that man here?” asked the infatuated Smiths. ‘Why,’ replied the other. “I guess as how we might by going after him; and if I had a little change to pay the expenses, I would go myself.” Away they went some to his farm, and some to his merchandise, to gain money to pay the expense of bringing the money dreamer from Ohio. The desired object was at length accomplished, and Ringdon the famous Ohio man, made his appearance. He had been a preacher of various religions, and a teacher of almost all kinds of morals. He was experienced in all sorts of camp-meetings, prayer-meetings, anxious-meetings, and revival, or four-days’ meetings. He knew every turn of the human mind relative to these matters. He had considerable talent and great plausibility. He partly united with the money-diggers in making an excavation in what has since been called the “Golden Bible Hill.”

These were times and these are a people admirably suited to the promulgation of a new Bible and a new religion. Such fanatics as these were the murderers of Morgan. In such times and under such circumstances, was bread the Mormon religion.

In this age of wonders, the cunning ex-preacher from Ohio suggested to the money- diggers to turn their digging concern into a religious plot. It was therefore given out that a vision had appeared to Joe Smith, that there was deposited in the hill I have mentioned an iron chest containing golden plates on which was engraved the “Book of Mormon. ” These engravings were said to be in unknown characters, to all but the inspired translator, and were deposited there by a wandering tribe of the Children of Israel, before the Christian Era. It was now given out that young Joe Smith was the chosen one of God to reveal this new ministry to the world—to be the second Messiah to reveal to the world this word of life, and to reform it anew. So Joe, from being an idle, lounging fellow, became a grave, parson-like man, with a respectable looking sort of a black coat, and with the salvation of the whole world upon his shoulders. Old Joe, the ex-preacher, and several others, were the converts to the new faith, which they asserted was foretold in the Bible. But Harris was undoubtedly a true convert, and the first man who gave credit to the whole story. He was the Ali of the New York Mahomet. Ringdon the preacher knew well how to work upon the credulity of a people already excited to religious enthusiasm. His aspect was grave and contemplative, and he could quote abundance of scripture to prove his assertions. This ex-parson is no doubt the author of the book. It is full of strange narratives, in the style of the scriptures, and appears to evince some ingenuity.

A fac simile of the characters on the golden plates was carried to Dr. Mitchell, by Harris.

The Dr. gave some learned observations on them, but wiser heads than he were employed in the translation.—Harris raised money on a mortgage of his farm, and got the translation printed at Palmyra. The book came out to the world, and the diggers soon found they had not dug for money in vain, for by its precepts money could be raised in the twinkling from the new converts, who were daily flocking to the new standard. Another revelation now upon them. The prophets were directed to lead the way to the promised land, a place near Painesville, Ohio, and subsequently to some place on the Mississippi river, where they have adopted some of the worldly views of the Shakers, having formed a sort of community system. The roads in Trumbull county were at times crowded with these deluded wretches, with their wagons and effects, on their way to the promised land.

The infatuation of these people is astonishing beyond measure. Husbands tearing themselves from their wives and such of their families as refuse to go, and wives deserting their husbands, to join the infatuated clan. A respectable physician of Trumbull county, who informed me of the latter proceedings, also informed me of several instances where the sick have died, refusing medical aid, persisting in the belief that, faith in the Mormon religion would save their lives. That he actually had been called in cases of the last extremity, where their faith had finally failed them.