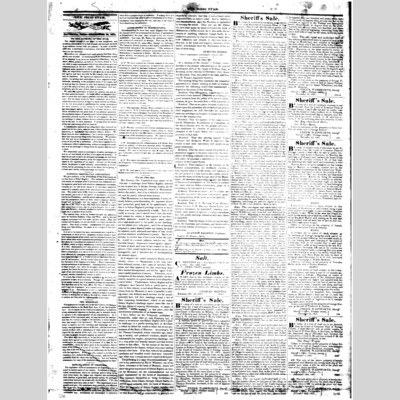 MR. EDITOR—Sir, I noticed in your paper of the 15th inst. a challenge from Sidney Rigdon, directed to me, to meet him in Hiram, Portage county, for the purpose of investigating the subject of Mormonism, before the public, that if he is deluded, to be corrected, and the public relieved from anxiety.

That Mormonism is a base imposition I most certainly believe, notwithstanding the apparent honest and pretended great faith of its proclaimers; and that it is Sidney Rigdon’s privilege to know as much about it as I do, is undoubtedly a truth. Now if he really is anxious that I should teach him the truth, and correct his errors, it does appear to me that a private interview would be much more convenient and much more to his profit, as our dwellings are about sixty rods apart; and if he is honestly disposed to place himself under my tuition, he shall be tenderly used, and such care taken of him as his peculiar condition would seem to justify. But to undertake to correct him of his errors before the public, would be a most arduous task for me.

His irascible temper, loquacious extravagance, impaired state of mind, and want of due respect to his superiors, I fear would render him in such a place, unmanageable, and I therefore fail of accomplishing the desired object.

As it respects the public anxiety in Hiram and its vicinity, relative to Mormonism, it has long since been relieved, except a few cases of seceding Mormons, and they appear to be fast recovering from their mental derangement, and bid fair again to become useful members of society. Therefore, an investigation of this subject, before the public, for their benefit, would be in a great measure if not altogether, void of utility. Furthermore, Sidney Rigdon and his colleagues have labored both in public and in private, to their utmost, in and about Hiram, since their return from the Missouri, to save, if possible, a sinking cause, but without much success, for the people generally have left their meetings, except a few of their remaining brotherhood, which to me makes Sidney Rigdon’s challenge appear more like one of the throes of expiring Mormonism, to cause, if possible, “public anxiety” in this place, than the spontaneous prodcution of an honest heart.

I have before me the Telegraph, published at Painesville, under date of 15th February last, in which is an account that Sidney Rigdon gave a public challenge, in a public meeting held at Kirtland, in which he defied the world to refute the divine pretensions of the Book of Mormon.

Accordingly, Elder Thomas Campbell, whose venerable age, standing in society, and profound erudition, should have commanded his respect, accepted his challenge, and in a very polite and friendly manner sent him written notice to that effect. One the receipt of the note, he committed it to the flames, without even once reading except a few lines. If he then with all his professed meekness and humility would thus treat venerable age, what may a young man now expect at his hands?

The following is a copy of a commandment,* placed in my possession by David Whitmer, one of the three witnesses to the book of Mormon, which will show the great importance of Sidney Rigdon, as viewed by Mormons: for the commandments are not only represented by the heads of department, but they represent themselves as being revelations directly from Jesus Christ, through Joseph Smith, Jr., and of equal authority with the book of Mormon.—Now the biography of Sidney Rigdon, together with the history of Mormonism since their first appearance on this Reserve, will go abundantly to prove to any superficial observer that this commandment never originated form an infinite mind. But to disbelieve one commandment, says the Mormon, is equivalent to denying the whole. Thus you see, Mr. Editor, if a man once opens his heart to receive the book of Mormon as a divine record, he is also under the necessity of receiving whatever Joseph Smith, Jr. is pleased to proscribe by way of commandment, however ridiculous and absurd, or else turn back, as they say, to the weak and beggarly elements of this world, and thereby incur the displeasure of the author of their being.

*This Commandment is necessarily deferred.— Ed.