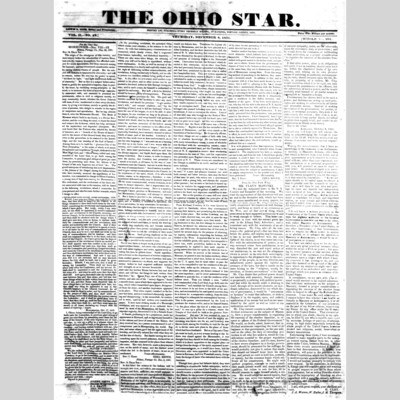 In this letter the mission to the Indians will be brought into view, and with it, are connected circumstances and facts, sufficient, one would suppose, to convince every honest and unprejudiced Mormonite, of the fallacy and deception of Mormonism. But a Mormonite of the highest grade, is invulnerable, by facts the most notorious, and evidence, as glaring as the noon-day sun; for they affirm, they know by the spirit that Mormonism is what it pretends to be; and should Smith acknowledge it to be a fabrication, they would not believe him. This forms the highest climax in Mormonism, and but few have attained to it. After Cowdery, and his three associates had left the state of N. Y. while bending their course to the west, he was directed by the spirit to Kirtland, for the special purpose of enlisting Rigdon in the Mormonite cause. I have since learned, that the spirit which directed in this enterprize, was no other than Pratt, who had previously become acquainted with Rigdon, and had been proselyted by him into what is called the Campbellite faith. This new system appears to have been particularly suited to Rigdon’s taste, and calculated to make an impression on his mind. But before he could fully embrace it, he must “receive a testimony from God.” In order to do this, he labored as he was directed by his Preceptor, almost incessantly and earnestly in praying, till at length, his mind was wrapped up in a vision; and to use his own language, “to my astonishment I saw the different orders of professing Christians passing before my eyes, with their hearts exposed to view, and they were as corrupt as corruption itself. That society to which I belonged also passed before my eyes, and to my astonishment, it was as corrupt as the others. Last of all that little man who brought me the Book of Mormon, passed before my eyes with his heart open, and it was as pure as an angel: and this was a testimony from God, that the Book of Mormon was a Divine Revelation.” Rigdon is one who has ascended to the summit of Mormonisn; and this vision stands as the foundation of his knowledge. He frequently affirms, that these things are not a matter of faith with him, but of absolute knowledge. He has been favored with many extraordinary visions, in some of which he saw Kirtland with the surrounding country, consecrated as the promised land, and the Churches in the state of N. Y. expected to received their everlasting inheritance in the state of Ohio, and this expectation was grounded upon Rigdon’s visions, while he was in the state of N. Y. These visions are considered by the Church as entitled to no credit, and laid aside as mere rubbish.

As it relates to the purity of the heart of “that little man,” if a pure and pleasant fountain can send forth corrupt and bitter streams, then may the heart of that man be pure, who enters into a matrimonial contract with a young lady, and obtains the consent of her parents; but as soon as his back is turned upon her, he violates his engagements, and prostitutes his honor by becoming the gallant of another, and resolves in his heart, and expresses resolutions to marry her. But as the practice of a man will ever stand as a general criterion by which the principles of the heart are to be tested, we say, that the heart of such a man is the reverse of purity.

From Kirtland, Cowdery & Co. were directed by the spirit to Sandusky, where they contemplated opening their mission, and proselyting the Indians residing at that place. But neither Cowdery, nor the spirit which directed him, was able to open the way to, or make any impressions upon their minds. Being frustrated in this, his first attempt to convert the Natives, he turned his attention and course to Missouri, and when near the eastern line of that state, he halted for several days, for the purpose of obtaining, by inquiry, information respecting the Indians, still further to the West. It appears that he was fearful that his infallible guide, (the spirit,) was incapable to direct him, while proceeding further to the west; consequently, he applied to men more capable of giving instruction than the spirit, by which he was influenced. When he arrived at the western line of Missouri, he passed it into the Indian territory, where he continued but a short time, before he was notified by the U. S. agent, that he must either re-pass the line, or be compelled to take his residence in the garrison, forty miles up the Arkansas river. As there was no other alternative, the former seemed to him the most expedient; and he never possessed courage sufficient to pass the line, or visit the residence of the Indians since. Thus you behold a man, “called and commanded of the Lord God, to go forth unto the Lamanites,” and establish his Church among them; but no sooner is he set down in the field of his mission, and surrounded by his anticipated converts, than he is driven by a comparative nothing, from the field, and obliged to relinquish his contemplated harvest.—This is the person commissioned by the Lord to prostrate the western wilds, and as he himself stated, “to the place where the foot of a white man never trod,” to rear up a pillar for a witness, where the Temple of God shall be built in the glorious New-Jerusalem.” But alas! he was arrested by man in his course, and by the breath of man the mighty undertaking was blown into the air, and Cowdery was thrown back among the Gentiles, to wait for the spirit to devise some new plans in the place of those which had been frustrated. But as a City and a Temple must be built, as every avenue leading to the Indians was closed against the Mormonites, it was thought that they should be built among the Gentiles, which is in direct opposition to the original plan—as foreign from the design of the spirit, expressed in several commandments, as it would have been, had the Directors, who were appointed to build the Courthouse in Ravenna, buil it in Trumbull county, foreign from the design of those who entrusted them with the business.

Though their plans had hitherto failed, they were unwilling to abandon the Indian enterprize; and in a commandment it was stated, that Cowdery and others should receive a written recommendation, signed by the Elders, for the purpose of presenting it to the Indian agent, in order to obtain permission from him, to visit the Indians in their settlements. The recommendation was written according to commandment, and frequent opportunities occurred in which it might have been presented to the agent, but it never was presented, and of course was useless, he was censured by some for not presenting it, but I suppose the spirit directed him not to do it.

Another method has been invented, in order to remove obstacles which hitherto have proved insurmountable. “The Lord’s store-house,” is to be furnished with goods suited to the Indian trade, and persons are to obtain license from the government to dispose of them to the Indians in their own territory; at the same time, they are to disseminate the principles of Mormonism among them. From this smugling method of preaching to the Indians, they anticipate a favorable result. In addition to this, and to co-operate with it, it has been made known by revelation, that it will be pleasing to the Lord, should they form a matrimonial alliance with the Natives; and by this means the Elders, who comply with the thing so pleasing to the Lord, and for which the Lord has promised to bless those who do it abundantly, gain a residence in the Indian territory, independent of the agent. It has been made known to one, who has left his wife in the state of N. Y. that he is entirely free from his wife, and he is at liberty to take him a wife from among the Lamanites. It was easily perceived that this permission, was perfectly suited to his desires. I have frequently heard him state, that the Lord has made it known to him, that he is as free from his wife as from any other woman; and the only crime that I have ever heard alleged against her is, she is violently opposed to Mormonism. But before this contemplated marriage can be carried into effect, he must return to the state of N. Y. and settle his business, for fear, should he return, after that affair had taken place, the civil authority would apprehend him as a criminal.

It is with pleasure I close this exposition, having in part accomplished, what I intended when I commenced it. The employment has been an unpleasant one to me, and from the first, I should have gladly avoided it, could I have done it, and maintained a conscience void of offence, towards God and man.—But should an individual by this exposition, be extricated or prevented from falling into the delusion, which has been the subject of consideration, I shall be amply compensated, for the painful task which I have performed.