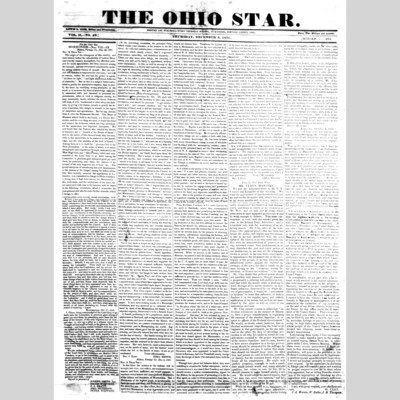 The origin of the aborigines of this country, and their history before the introduction of eastern literature into the western hemisphere, has afforded a subject for much speculation, and deep research among the learned; and has occasioned considerable curiosity among various classes of people. But the subject still remains in impenetrable obscurity; and will so remain, unless He who has the power to speak, “let there be light,’ “and light shall break forth out of obscurity.” But as this is a subject better calculated to gratify the speculative inquirer, than to purify the heart, by rectifying wrong principles in the mind, or to increase that kind of knowledge intimately connected with, and essential to practical improvements, either in civil or religious society, we may reasonably doubt, whether the Great Jehovah will soon, if ever, condescend to clear away the darkness, by giving a revelation, merely to gratify the desires of persons, who delight to wander in the region of conjecture and speculation. But he has already done it, cries the Mormonite Herald. The Book of Mormon which I hold in my hands, is a Divine Revelation, and the very thing we need, to burst the cloud and remove the darkness, which has long surrounded the mysterious and degraded aborigines. We now know that the Natives who inhabit the forest of America, are a “branch of the House of Israel;” and by the means of this blessed book, they are soon, even in this generation, to be restored to the knowledge, and the true worship of the God of Israel.—Among them is to be built the “glorious City of the New-Jerusalem,” in the midst of which is to stand, the splendid and magnificent Temple, dedicated to the Most High God, and “Oliver being called and commanded of the Lord God, to go forth among the Lamanites, to proclaim glad tidings of great joy unto them, by presenting unto them, the fulness of the Gospel of the only begotten son of God,” &c. The grand enterprise of introducing this new dispensation, or the fulness of the Gospel, among the Indian tribes, who have recently received the appellation of Lamanites, was committed in charge to Oliver Cowdery, a young man of high fame among the Mormonites.—His credentials, and the credentials of the three others associated with him in the mission, will be found in the following revelations, which I transcribe for your perusal, and also for some further remarks, which I design to offer.

A REVELATION UNTO OLIVER, GIVEN SEPTEMBER, 1830

Behold, I say unto you, that it shall be among the Lamanites. Thou shalt not leave this place until after the Conference, and my servant Joseph shall be appointed to rule the Conference, by the voice of it: and what he saith unto thee that thou shalt tell. And again, thou shalt take thy brother Hiram between him and thee alone, and tell him that those things which he hath written from that stone are not of me, and that Satan hath deceived him, for these things have not been appointed unto him, neither shall any thing be appointed to any in this Church, contrary to the Church Covenant, for all things must be done in order, and by commandment, by the prayer of faith, and thou shalt settle all, these things, before thou shalt take thy journey among the Lamanites; and it shall be given from time to time, that thou shalt go, until the time that thou shalt return, what thou shalt do; and thou must open thy mouth at all times, declaring my Gospel with the sound of rejoicing.—Amen.

I, Oliver, being commanded of the Lord God, to go forth unto the Lamanites, to proclaim glad tidings of great joy unto them, by presenting unto them the fulness of the Gospel, of the only begotten son of God; and also, to rear up a pillar as a witness where the Temple of God shall be built, in the glorious New-Jerusalem; and having certain brothers with me, who are called of God to assist me, whose names are Parley, Peter and Ziba, do therefore most solemnly covenant before God, that I will walk humbly before him, and do this business, and this glorious work according as he shall direct me by the Holy Ghost; ever praying for mine and their prosperity, and deliverance from bonds, and from imprisonments, and whatsoever may befal us, with all patience and faith.—Amen.

We, the undersigned, being called and commanded of the Lord God, to accompany our Brother Oliver Cowdery, to go to the Lamanites, and to assist in the above mentioned glorious work and business. We do, therefore, most solemnly covenant before God, that we will assist him faithfully in this thing, by giving heed unto all his words and advice, which is, or shall be given him by the spirit of truth, ever praying with all prayer and supplication, for our and his prosperity, and our deliverance from bonds, and imprisonments, and whatsoever may come upon us, with all patience and faith.—Amen.

Signed in presence of

In the preceding revelation, the principal thing which claims your attention, is the mission to the Indians; for with that mission many circumstances are connected, which clearly evince, that it originated from human imbecility, and diabolical depravity.—There are also some other things, the meaning of which, you will not be likely to apprehend, without some explanation. In this, as well as several of the commandments, it is clearly and explicitly stated, that the right of delivering written commandments, and revelations, belong exclusively to Smith, and no other person can interfere, without being guilty of sacrilege. In this office he is to stand, until another is appointed in his place, and no other person can be appointed in his stead, unless he falls through transgression; and in such a case, he himself is authorized to appoint his successor. But how is he to be detected, should he become guilty of transgression. The commandment makes provision for this. His guilt will become manifest by his inability to utter any more revelations, and should he presume “to get another man’s wife,” and commit adultery; and “by the shedding of blood, seek to kill her husband,” if he retains the use of his tongue, so as to be able to utter his jargon, he can continue as long as he pleases in the bed of adultery, and wrap himself with garments stained with blood, shed by his own hands, and still retain the spotless innocence of the holiest among mortals; and must be continued in the office of revelator, and head of the Church.

Some others, and especially Cowdery, have earnestly desired to relieve Smith of some part of his burden. Cowdery’s desires for this work were so keen and excessive, as, to use his own language, it “was unto me as a burning fire shut up in my bones, and I was weary with forbearing, and I could forbear no longer;” and he did in fact, issue some productions, which he said bore the Divine impress; but Smith fixed upon them the stamp of devilish. But it seems, in order to compromise the matter, that Cowdery was permitted to “speak or to teach, at all times, by the way of commandment unto the Church: but not to write them by the way of commandment;” thus Cowdery is authorized to give verbal commandments to the Church, by the inspiration of the spirit, which, if he afterwards writes, ceases to be inspiration; therefore, a commandment delivered orally, may be divinely inspired; but the same communicated, written verbatim, so far loses its former character, that it degenerates into a production of an infernal stamp. Here is a mystery, for aught I know, peculiar to Mormonism; and none but Mormonites, I presume, will attempt to unravel it. But it finds its parallel in the following. Smith assures his followers, that what he speaks by the spirit, and is written, is infallible in operation, but if it is not written, he may sometimes be mistaken.—He tells them, that the right to deliver written revelations, belongs exclusively to himself, and no other person shall interfere in the business; and if he transgresses, he will graciously condescend to appoint another in his stead, and the only proof produced for the support of such assertions, is barely his word upon which they implicitly rely, and become entirely resigned to place their person and property under his control, and even to risk the salvation of their souls upon his say-so. Such glaring duplicity on the one hand, and unaccountable credulity on the other, seldom have a parallel in the annals of man.

Never was there a despot more jealous of his perogatives than Smith; and never was a fortress guarded with more vigilance and ardor, against every invading foe, than he guards these.

Smith apprehended a revival in the department of written inspiration, from another quarter, and hence Cowdery was commissioned to commence an attack, and suppress the enemy, before he had acquired sufficient stability and strength, so as to become formidable. “Thou shalt take thy brother Hiram between him and thee alone, and tell him the things he hath written from that stone,” &c. Hiram Page, one of the eight witnesses, and also one of the “money diggers,” found a smooth stone, upon which there appeared to be writing, which when transcribed upon paper, disappeared from the stone, and another impression appeared in its place. This when copied, vanished as the former had done, and so it continued alternately appearing and disappearing; in the meanwhile, he continued to write, until he had written over considerable paper. It bore most striking marks of a Mormonite revelation, and was received as an authentic document by most of the Mormonites, till Smith, by his superior sagacity, discovered it to be a Satanic fraud.

A female, professing to be a prophetess, made her appearance in Kirtland, and so ingratiated herself into the esteem and favor of some of the Elders, that they received her, as a person commissioned to act a conspicuous part in Mormonizing the world. Rigdon, and some others, gave her the right hand of fellowship, and literally saluted her with what they called the kiss of charity. But Smith viewing her as encroaching upon his sacred premises, declared her an impostor, and she returned to the place from whence she came. Her visit, however, made a deep impression on the minds of many, and the barbed arrow which she left in the hearts of some, is not as yet eradicated.